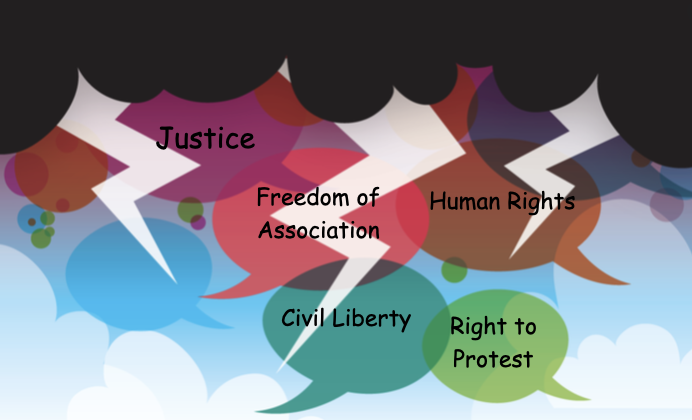 “New laws to curb protests which threaten democracy” is quite the phrase. We have a five-yearly democratic event which hands absolute power to the Government. In the years that follow, the right to protest is all there is of democracy. Be very afraid.”

These are the words of Joe Maugham QC – director of the Good Law Project, barrister and Honourary Professor at Durham Law School.

Since TruePublica started in 2015 we have been warning that under this Conservative government there would be a significant shift to the political right and that it would usher in a type of hybrid authoritarianism. This is characterised by a more centralised and often secretive form of government. Adam Przeworski one of the most celebrated theorists and analysts of democratic societies theorises that “authoritarian equilibrium rests mainly on lies, fear and economic prosperity“.

There are many examples of what Boris Johnson is doing to dismantle the checks and balances of Britain’s democracy. Illegally suspending parliament, rigging appointments to parliamentary committees, the use of decrees and fast-track laws to cut parliament out of the law-making process and forbidding scrutiny of all manner of laws are just some of the tactics being used. In addition, the government has undermined the country’s independent legal system, the Human Rights Act and is happy to flagrantly break international law in front of the world.

Seen in isolation, some of these threats to the democratic fabric of our country may not seem that important and we may well dismiss them – but added up and seen in the context and trajectory of travel, it is not hard to see what’s coming down the road.

One of the most important freedoms democracy provides for is the right to protest. Even this is now at threat. Under the guise of Covid and using its own special powers – Priti Patel, the Home Secretary is now seeking to make it illegal for protesters to obstruct Parliament, the courts, and the distribution of newspapers or broadcast media in a way that prevents them exercising their democratic duties.

When asked about the proposed powers, Cabinet Office Minister Michael Gove ominously said it is “important the police get the powers they need.”

Currently, the Public Order Act gives the power to prohibit protest marches which cause serious public disorder – but not any other form of protest. What this does is give unconditional authority and full discretionary powers to stop any protest whatsoever when it deems it convenient to do so.

The proposed law is a clear threat to democracy and “another attack on our ability to stand up to power”, human rights campaigners Liberty said.