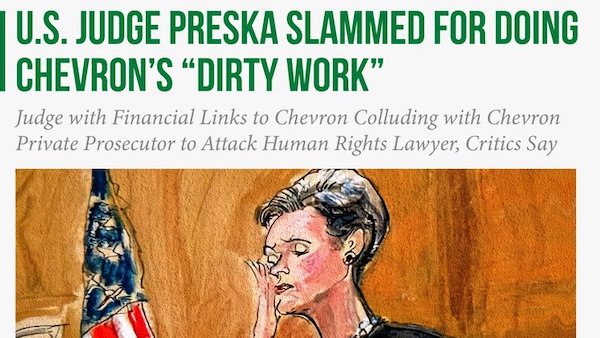 U.S. trial judge Loretta Preska has denied all Zoom access to the upcoming contempt trial of human rights lawyer Steven Donziger in a widely condemned move that his lawyers say is designed to limit public access to an unprecedented one-sided trial run by a private Chevron prosecutor.

Marty Garbus, who is representing Donziger along with Rob Kuby, condemned the move as an “obvious and transparent attempt to hide public scrutiny of a farcical proceeding with a biased judge, no jury, and a private Chevron prosecutor.”

Donziger organized the international legal team that won a historic $9.5 billion pollution judgment in Ecuador against Chevron. Multiple courts, and a total of 29 appellate judges in Ecuador and Canada, have ruled that the company is liable for dumping cancer-causing oil waste onto Indigenous ancestral lands in the Amazon when it operated there from 1964 to 1992.

Chevron and U.S. Judge, Lewis Kaplan have mounted a ferocious retaliation campaign against Donziger which has resulted in his pre-trial home detention in New York for almost two years on misdemeanor contempt charge. Donziger is the only lawyer in U.S. history held pre-trial on a minor contempt charge where the longest sentence ever imposed is 90 days of home confinement.

Kaplan’s contempt charges against Donziger were rejected by the U.S. federal prosecutor. Kaplan then appointed a Chevron law firm, Seward & Kissel, to prosecute Donziger while the firm billed taxpayers more than $500,000. Preska herself is a leader of the Chevron-funded Federalist Society, a pro-corporate legal advocacy group.

Prior to the recent decision, Preska had allowed Zoom access to all of Donziger’s pre-trial hearings and had granted Zoom access to his trial on three occasions prior to their postponement due to Covid. Restrictions on courthouse attendance are still in place because of the Covid risk, so it is unclear why Preska changed her approach to Zoom other than the fear of being scrutinized in front of the many thousands of people who were expected to dial in and listen, said Garbus.

Judge Preska’s decision to terminate all Zoom access to Mr. Donziger’s trial in the middle of severe restrictions on courthouse attendance due to Covid is an outrage. We have been highly critical of Judge Preska’s ties to the Chevron-funded Federalist Society; her denial of Mr. Donziger’s jury trial rights; and her totally unjustified imprisonment of Mr. Donziger in his home for almost two years on a misdemeanor contempt charge that was rejected by the regular federal prosecutor. Mr. Donziger has a right to an unbiased judge and a fair prosecutor; he has neither. This explains why Judge Preska is trying to limit public access. This is wrong and I believe unconstitutional.

I call on Judge Preska to reconsider her decision to deny Zoom access to my trial. Given the risk of travel from Covid, many people around the world–including my Indigenous clients in Ecuador and supporters in numerous countries–had expected to be able to bear witness to the proceedings via Zoom as a way to protect my fundamental right to a fair trial. Judge Preska just months ago was trying to force me into a Zoom trial without my lawyer present in court so it is unclear what has changed other than continued exposure of the many embarrassing flaws of the proceeding, including my unprecedented home imprisonment for almost two years on a misdemeanor charge.

This decision by Judge Preska to deny Zoom access to my trial is yet another disturbing example of why this trial proceeding will not be fair. My lawyers are calling on the United States Department of Justice to review this case and remove the private prosecution team led by Rita Glavin due to her employment at a law firm that has a client relationship with Chevron, the company that has been demonizing me for years. For this reason and others, we believe my prosecution is unconstitutional. In the United States, people do not get prosecuted privately by corporate law firms on behalf of private clients. This charade must end.