[The irony of this is that on New Year’s Day, 2000, I went through something similar on South Africa’s Wild Coast and wrote about it here, ‘Washed Up on the Wild Coast‘.  But in Israel, it’s even worse, as Palestinians are being denied access to the beaches, not just segregated from Israelis on the beaches. WB] 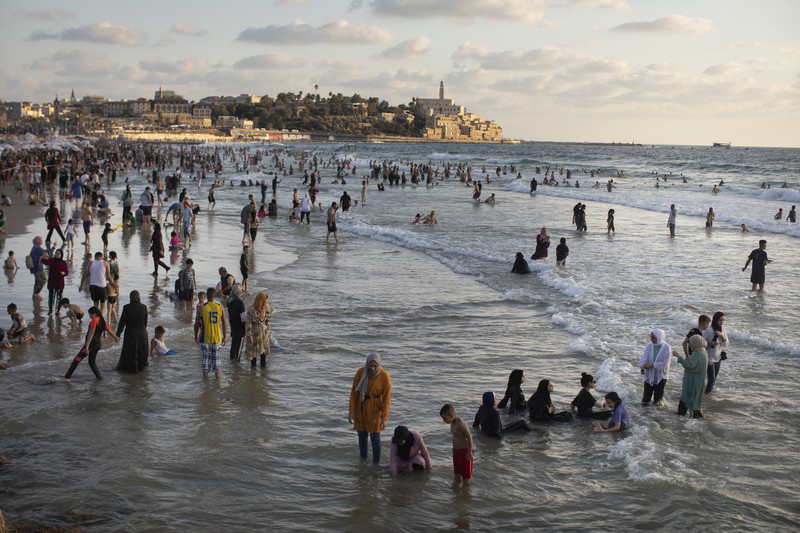 Palestinians on Jaffa beach last month. The city is inaccessible to most Palestinians from the West Bank, but some managed to get permits or evade Israeli restrictions. Other Israeli cities are now closing beaches to Palestinians. – Oren Ziv ActiveStills

Three Israeli coastal cities are being slammed by a civil rights group for effectively banning Palestinians from their beaches.

Hadera, Netanya and Akka – known in English as Acre – are guilty of “apartheid initiatives that express a goal of achieving racial segregation,” said a lawyer for the group Adalah.

Video shot by journalist Rafat Aker last week shows a busload of Palestinian men on an apparent day trip from the city of Jenin being denied access to the beach by police and local authorities.

You can watch the full video in a mixture of Arabic and Hebrew below.

“The images seen in Akka leave no room for the imagination: Municipal inspectors forcibly expelled Palestinians outside city limits solely because they are Palestinian,” Adalah lawyer Rabea Eghbariah said.

“The municipality is acting without any authority whatsoever,” he added.

Adalah argues that local authorities are using the ongoing coronavirus pandemic as a pretext to mask their apartheid policies against Palestinians.

The group, which advocates for equal Palestinian rights inside Israel, said that the men in the video appeared to have the correct permits and some had even been vaccinated.

from Nablus, Jenin, Hebron and others.”

Adalah also noted that the mayor of Netanya recently vowed not to allow Palestinians to enter the city during the Muslim Eid al-Fitr holiday.

This is far from the first time that Israeli authorities have imposed “petty apartheid” on Palestinians.

In 2019 the Israeli mayor of the city of Afula effectively banned Palestinians from a local park, including even Palestinian citizens of Israel.

He had imposed guards at the park entrances with a large sign stating it was for the use of “residents only” – yet only Palestinians were restricted in this way, not Israeli Jews. Adalah challenged the ban and it was ultimately overturned.

In 2013 a public Israeli swimming pool refused entry to a group of children with cancer just because they were Arab.

And a year earlier, Palestinians were turned away from an Israeli-run Dead Sea beach resort, while Jewish Israelis, European tourists and even dogs were allowed to enter freely.