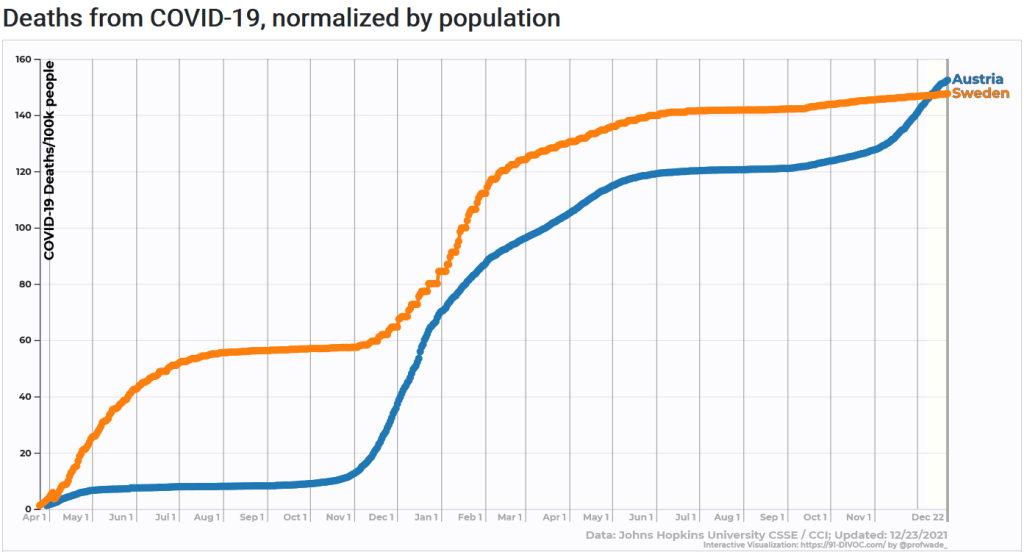 Austria, one of the most repressive European countries during the coronavirus pandemic, has recently overtaken Sweden in terms of total covid mortality, showing that almost all government interventions have been ineffective and unjustified.

Throughout the coronavirus pandemic, Austria has been one of the most repressive European countries, implementing several lockdowns, school closures, far-reaching mask mandates and even an N95/FFP2 mask mandate, record-setting mass PCR testing and contact tracing, as well as early “vaccine passports”. Austria was also the first Western country to impose a “lockdown for the unvaccinated” and the first Western country to announce a general “vaccine mandate”.

In contrast, Sweden has widely been regarded, or indeed criticized, as the least repressive Western country during the coronavirus pandemic, imposing no lockdowns, no elementary school closures, no mask mandates, no “vaccine passport”, and very limited testing and contact tracing compared to Austria and most other Western countries.

And yet, in December 2021, Austria overtook Sweden in terms of total covid mortality (see chart above). This comes after Austria had reached, in late November, the highest seven-day covid infection rate in the world. The European average covid mortality had already overtaken Swedish covid mortality back in March 2021.

But can Nordic Sweden and Alpine Austria really be compared in a legitimate way? Indeed, they can. To begin with, their population size is quite similar (10.4 million in Sweden vs. 9.0 million in Austria). While the median age in Sweden is slightly lower than in Austria (41.1 vs. 44.4 years; perhaps due to more immigration), the Swedish life expectancy is actually somewhat higher than in Austria (82.4 vs. 81.6 years).

Interestingly, the population weighted density, which takes urbanization into account, is somewhat higher in Sweden than in Austria (2724 vs. 2191, see map below). Obesity rates are very similar in Sweden and in Austria (20.6% vs. 20.1%). ICU capacity is significantly higher in Austria than in Sweden (5.3 vs. 1.9 beds per 1000 people).

In fact, total covid mortality in Austria and Sweden has reached the same level precisely because the two countries are so similar in terms of demographic and health factors. In both countries, the covid population fatality rate (PFR) has reached about 0.15% and is limited primarily to people over 70 years of age (the median age of covid deaths is about 83 years in both countries).

But is it fair to call December 2021 the “judgment day”? Indeed it is, because Sweden has already crossed the “pandemic finish line” and was the first Western country to see the return of influenza, which had been displaced by the coronavirus since March of 2020. Of course, the novel coronavirus will not disappear from Sweden or from anywhere else, and Sweden will certainly see future coronavirus waves, but Sweden has achieved a high population infection rate (about 60% to 75%) and has entered the endemic phase.

Thus, the fact that Austria has now overtaken Sweden in terms of total covid mortality really means that almost every single government intervention in Austria – and almost everywhere else – has been entirely ineffective from an epidemiological and medical perspective, while having caused almost unprecedented social and economic harm.

In particular, it means that lockdowns, school closures, mask mandates, N95/FFP2 mask mandates, mass PCR testing and “contact tracing”, as well as “vaccine passports”, have been entirely ineffective and unjustified as interventions to “combat the pandemic”.

Of note, this is not just “post-hoc knowledge”: with the exception of school closures (which are effective against influenza), it had long been known that all of these “interventions”, including masks and contact tracing, are ineffective against respiratory virus epidemics. Concerning masks, the question is not if they are effective in theory or in some lab experiment, but if they make any difference in the real world – and the answer is no.

In fact, in terms of all-cause excess mortality, Austria had surpassed Sweden already several months ago: total pandemic excess mortality currently is 17% in Austria vs. 11% in Sweden. This is primarily because many Swedish deaths happened earlier in the pandemic (in the spring of 2020) and most covid victims were very old (median age of 84); thus, by September 2020, Sweden recorded its lowest mortality in history. (Claims that Sweden has no or almost no excess mortality are based on an incorrect calculation method).

The same result has been observed in many other regions: In Eastern Europe, Belarus has recorded an average regional excess mortality despite almost no interventions at all; in Latin America, excess mortality in Brazil has been higher than in Chile and Argentina, but lower than in Peru, Bolivia, Ecuador, Mexico, Colombia and Paraguay; in Asia, lockdowns in India, Indonesia or the Philippines were horrific failures.

There was only one situation in which lockdowns were a rational intervention: as a preemptive measure in support of early border controls. This situation applied primarily to some islands, such as Australia, New Zealand and Iceland, and possibly to Norway, Finland, Denmark and parts of China (more on these countries below).

Critics of the Swedish approach have often argued that Sweden should only be compared to “its neighbors”. If one compares Sweden to all of its neighbors in the region – Norway, Finland, Denmark, but also Poland and the Baltic states – Sweden again shows an average covid mortality: Poland, Latvia and Lithuania are much higher, Estonia is similar, while Denmark, Finland and Norway are much lower.

It is not, as critics of Sweden would like to imply, because these countries had particularly strict measures. In fact, for the most part, their “stringency index” was even lower than in Sweden, and of course also lower than in repressive countries like Austria.

First, Denmark, Finland and Norway imposed early border controls and could avoid a major unexpected wave in the spring of 2020. “Early” here is a relative term and always depends on when the coronavirus reaches a certain country. Due to the timing of its winter holidays, the Stockholm area unknowingly imported the coronavirus directly from early covid hotspots in Alpine skiing resorts near Italy, which was not the case in other Nordic countries or even in other regions of Sweden. (In the famous case of Uruguay in South America, the first covid wave hit not until November 2020).

Second, and in the same context, other Nordic countries imposed preemptive lockdowns in support of early border controls that really may have helped disrupt early infections. But a lockdown is ‘preemptive’ only as long as there have been either no confirmed infections at all or only a very small number of infections that can still be contained without aerosolizing the virus.

Third, and most fundamentally, Norway and Finland have by far the lowest population weighted densities in Europe (910 in Norway and 986 in Finland, vs. 2724 in Sweden and 6785 in Britain; see the map below), which may have slowed the spread of covid.

In fact, in Western Europe, there is a striking correlation between population weighted density – which may influence the speed of virus transmission and the amplitude of infection waves – and covid mortality per country (see map below). This correlation does not apply, however, to Denmark, which has a low covid mortality but an average population weighted density (3434).

At the global level, high population weighted density might help explain strong covid waves in Britain, Spain and Italy, Turkey, South America (including Mexico) and South Africa, but not (so far) in Japan, Canada, Australia and New Zealand. Low population weighted density could help explain the slow spread of the coronavirus in Norway, Finland, Indochina, and parts of Black Africa (see map below).

Coming back to the comparison between Sweden and Austria, one factor that worked against Austria was the failure of covid vaccines: if covid vaccines had provided strong long-term protection, Austria could have avoided the very high covid mortality in the winter of 2021/22 (see chart above). On the other hand, in the spring of 2020, even optimists hadn’t expected covid vaccines becoming available before autumn 2021.

The failure of covid vaccines is also a major problem for low-covid countries like Norway, Finland, Australia, New Zealand and China, which now are in a very uncertain position.

While all of the interventions imposed by Austria and other repressive countries failed, are there any potentially effective interventions that have not been adopted?

A few options may be mentioned.

First, research and use of repurposed early treatment drugs should have been a major priority to reduce hospitalizations (especially given the uncertainties regarding vaccine protection).

Second, dedicated covid hospital facilities should have been created to avoid widespread in-hospital transmission (in some countries, including Sweden, the UK and the US, such facilities were indeed created, but they remained largely unused).

Third, given their low covid risk, offering voluntary, medically supervised live virus infection to children and young healthy adults may have made sense to rapidly build up a natural immunity shield, protect high-risk groups (including parents), and ensure smooth education.

Fourth, while masks have been a complete failure (as was already known before the pandemic), indoor ventilation to prevent aerosol transmission might have been one of the most effective interventions (with >99% of all transmission occurring indoors). Then again, living rooms and class rooms cannot be turned into airplane cabins.

Fifth, the media should have supported the calm management of the pandemic, fostering social cohesion and mindfulness, instead of inciting panic and hysteria. The many “dashboards” and “live tickers” may well have been counterproductive.

Sixth, we may have to recognize that societies with a life expectancy of over 80 years and obesity rates of over 20% are inherently susceptible to events like the coronavirus pandemic.

Needless to say, most Western health authorities have not yet acknowledged that their entire approach to the pandemic has been a complete failure. In a typical move, the Austrian health minister in early December claimed that the most recent Austrian lockdown had been effective in breaking the winter wave, but independent analysts quickly pointed out that infections had decreased simultaneously in neighboring countries without a lockdown.

In conclusion, the comparison of Austria and Sweden conclusively shows that a calm, low-intervention, almost business-as-usual approach to the pandemic has been best. In contrast, highly irrational strategies, such as “zero covid” and “no covid”, have caused unprecedented social, political and economic damage at an almost civilizational scale.

You have been reading: Judgment day: Sweden vindicated. An analysis by Swiss Policy Research.

The analysis above quotes 2020 figures, while the following map shows 2015 figures. 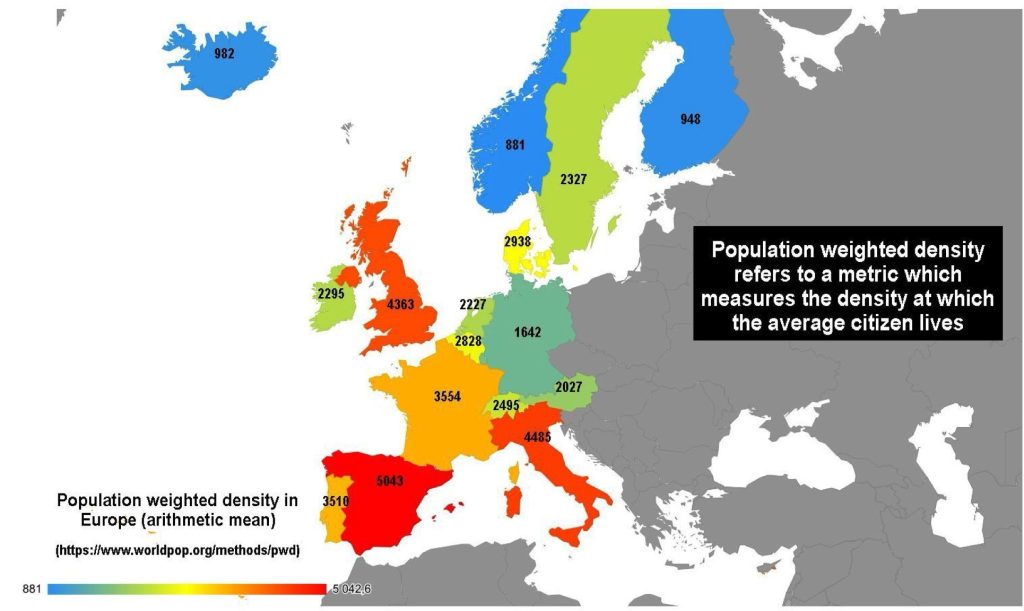 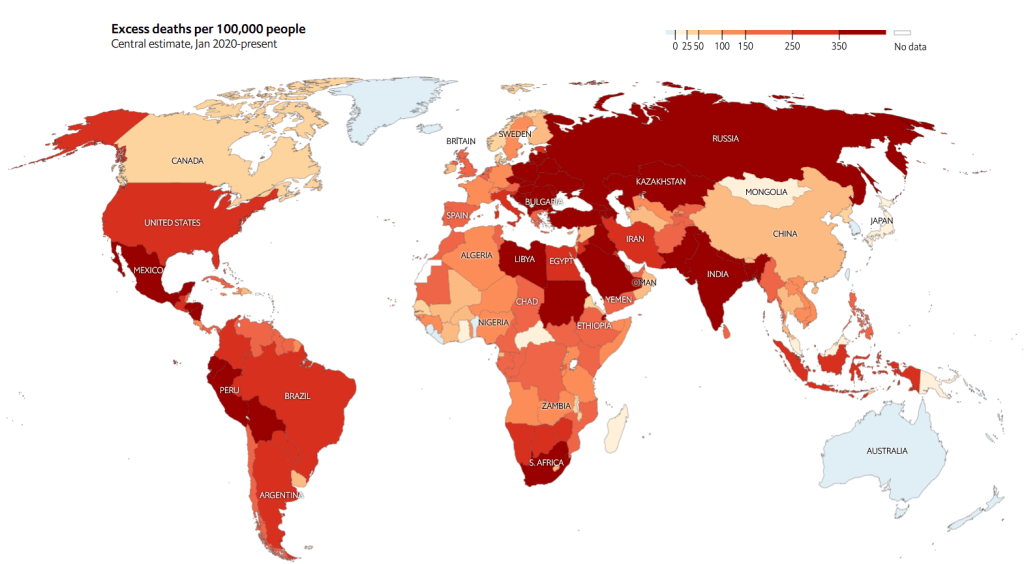 Daily covid tests per 1000 people in Austria, Sweden and Britain. 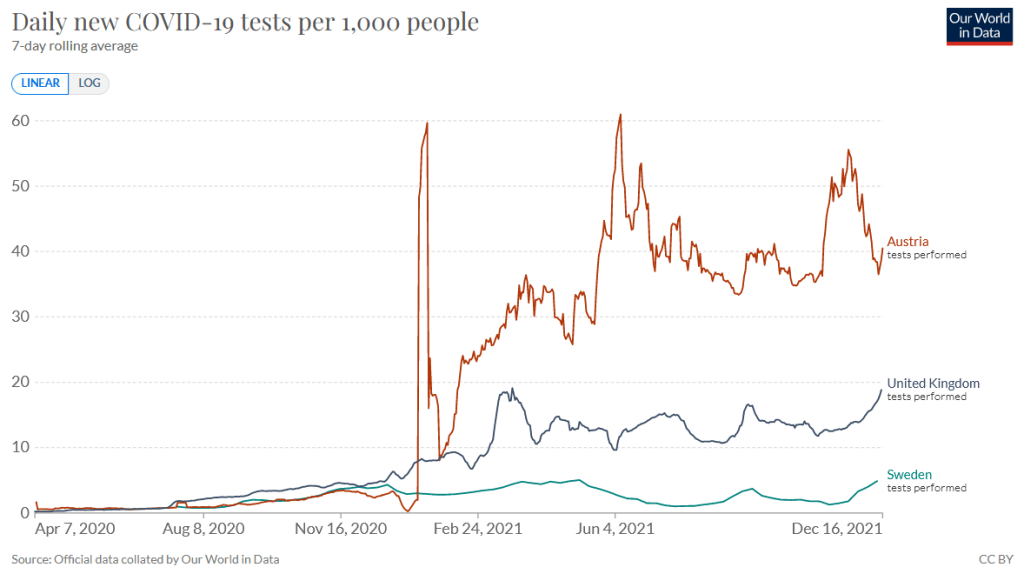 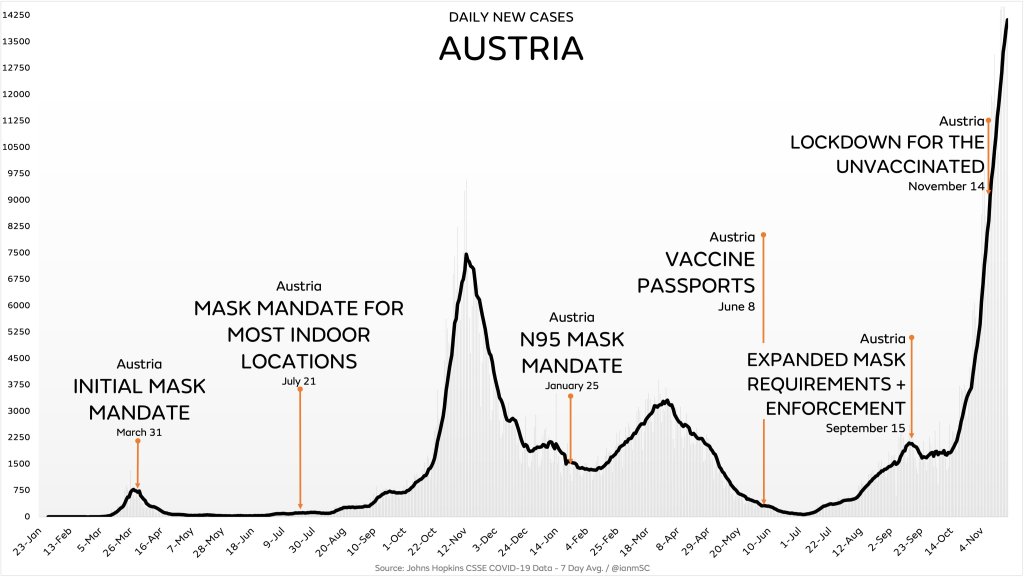