It feels weird to watch the delusional talk of the United States towards Russia.

How can people who are as wrong as Biden and Blinken be at the top of a state?

President Biden said on Wednesday that he now expected President Vladimir V. Putin of Russia would order an invasion of Ukraine, delivering a grim assessment that the diplomacy and threat of sanctions issued by the United States and its European allies were unlikely to stop the Russian leader from sending troops across the border.

“Do I think he’ll test the West, test the United States and NATO, as significantly as he can? Yes, I think he will,” Mr. Biden told reporters during a nearly two-hour news conference in the East Room of the White House. He added, almost with an air of fatalism: “But I think he will pay a serious and dear price for it that he doesn’t think now will cost him what it’s going to cost him. And I think he will regret having done it.”

Asked to clarify whether he was accepting that an invasion was coming, Mr. Biden said: “My guess is he will move in. He has to do something.”

Has Biden even once asked the very simple question: “Why would Russia want to do that?”

Retired ambassador M.K. Bhadrakumar points out that even U.S. allies do not believe Biden’s bullshit:

It is an open secret that in October and November, France, Germany and some others in the EU questioned Washington’s warnings that Russia’s military buildup near Ukraine could signal an imminent invasion. France and Germany even opposed activating NATO’s crisis response planning system and had to be persuaded to relent.

Above all, Europeans have no desire to bankroll Ukraine which is a black hole and failing state. It doesn’t make sense to them when the US intelligence brags in the media that they’d bleed Russian troops in a guerrilla war in the middle of Europe. Fundamentally, all this dovetails into a pervasive scepticism among the European elite regarding the Biden administration.

In a recent interview Sergej Karaganov, who heads the Russian Council on Foreign and Defense Policy, explained why invading the Ukraine is very dumb idea:

[O]f course, we absolutely do not need to fight for Ukraine to the last Ukrainian, we certainly do not want to fight there. All this squealing about the fact that we are going to capture Kiev, it is about nothing. Yes, our military is standing at the Ukrainian border, but only so that on the other side it does not occur to anyone to break into the Donbass. And the capture of Ukraine in our military plans, I’m sure, is not included. If only for the reason that

capturing a country that is castrated economically, morally and intellectually, a country with a destroyed infrastructure and an embittered population is the worst-case scenario.

The worst thing America can do for us is to give us Ukraine in the form they brought it to.

So is that what Biden and Blinken are trying to do? Give the Ukraine to Russia to create more problems for it? No, I don’t think they are smart enough to strategize that far.

Wait and see what happens when Russia launches the first Iskander.

That has to stop. But invading Ukraine is not the way to do that.

It requires direct pressure on the United States to move away from its confrontational course. Karaganov already senses that Russia is on its way to achieve that:

Even from recent conversations, it is noticeable that our Western partners have begun to retreat. They are already proposing dialogues between the military, negotiations on arms limitation – something that until recently was categorically rejected. So maybe we can agree on something.

Today’s talks in Geneva between Blinken and Lavrov seem to have moved into the right direction:

Russia’s foreign minister and his US counterpart have held what they called “frank” talks to try to reduce the chance of a wider conflict in Ukraine.

Sergei Lavrov repeated denials that a huge Russian force assembled near Ukraine’s borders would be used to invade Ukraine.

Antony Blinken said America would respond severely to any invasion.
…
For Mr Blinken, the talks were “frank and substantive” while for Mr Lavrov, they were also “frank” with an agreement to “have a reasonable dialogue”.

Mr Blinken warned his Russian counterpart of a “united, swift and severe” response if Russia invaded.

Speaking after the talks, he said the US was prepared to pursue possible means of addressing Russian concerns in the spirit of reciprocity.
…
For his part, Mr Lavrov described the talks as open and useful but he accused Nato of working against Russia. He reiterated Moscow’s position that it had “never threatened the Ukrainian people” and had no plans to attack Ukraine.

He also accused the Ukrainian government of using “state terrorism” against the rebels in the east and “sabotaging” the Minsk peace agreements on the conflict there.

Russia’s foreign minister said the US would send “written responses” to all of Russia’s proposals next week but Mr Blinken only said America hoped to share its “concerns and ideas in more detail in writing next week”.

The talks between the two diplomats came just a day after Russia unveiled plans for naval drills involving more than 140 warships and more than 60 aircraft, seen as a show of strength.

Russia also moved some of its army brigades and airforce elements from eastern Siberia to Belarus where they will take part in exercises until February 20. This will complicate any plans Kiev might have for attacks on Donbass while Putin is in Beijing to watch the Olympics. The military authorities in Donbass today reported of new signs for such a move under the pretext of a false flag event (video – click CC for English translations). 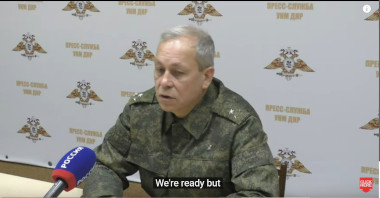 While Russia moves its forces and fleets Blinken tried to impress Lavrov with some stupid stunts.

The U.S. Treasury sanctioned two sitting members of Ukraine’s parliament for pursuing opposition policies. The State Department called that Taking Action to Expose and Disrupt Russia’s Destabilization Campaign in Ukraine. It also published two laughable new sections on its websites. One is about Russia’s alleged Top Five Persistent Disinformation Narratives in which the U.S. denies to be behind the various ‘color revolutions’ of the last decades. I bet Victoria ‘fuck the EU’ Nuland came up with that stupidity. The other is United with Ukraine, a collection of nonsensical and empty Blinken quotes and Ukrainian nationalist photography.

Lavrov was not amused about either:

The Russian foreign ministry mocked those statements, saying they must have been prepared by an Orwellian “Ministry of Truth,” and Lavrov caustically dismissed them in his remarks to Blinken, saying he hoped the State Department had also spent time drafting responses to Russia’s demands.

“I do hope that not everyone in the State Department was working on those materials and there were some who were working on the essence of our proposals and their substance,” he said.

That nicely sets out the contrast.

Blinken also felt a need to correct his boss:

Blinken took pains to stress U.S. unity with its allies in opposition to a possible Russian invasion, something that took an apparent hit earlier this week when U.S. President Joe Biden drew widespread criticism for saying retaliation for Russian aggression in Ukraine would depend on the details and that a “minor incursion” could prompt discord among Western allies.

On Thursday, Biden sought to clarify his comments by cautioning that any Russian troop movements across Ukraine’s border would constitute an invasion and that Moscow would “pay a heavy price” for such an action.

“I’ve been absolutely clear with President Putin,” Biden said. “He has no misunderstanding: Any, any assembled Russian units move across the Ukrainian border, that is an invasion.”

Russia has denied it is planning an invasion and instead accused the West on Thursday of plotting “provocations” in Ukraine, citing the delivery of weapons to the country by British military transport planes in recent days.

There will be no ‘Russian invasion’ of Ukraine. Should Donbass be attacked, Russian missile artillery, stationed in Russia, will demonstrate sufficient reach to destroy any Ukrainian units near the frontline.

The U.S. president should be more concerned about Cuban invitations for harbor visits of Russian missile submarines than about some wreck of a country on Russia’s border.

However, the U.S. and Russia are talking, which is good, and it seems that Russia has already achieved some of its aims. The process will continue.

We will have to wait for the written U.S. response to Russia’s demands to see in which direction it will develop.