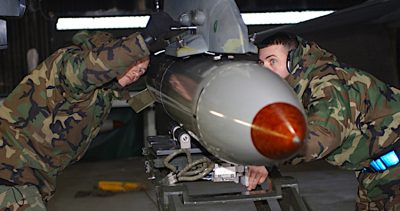 This is a serious issue, perhaps the most serious of issues in Europe, but coming as it does immediately on the heels of Russia’s prior list of demands being resolutely rejected by the U.S. and NATO yesterday, the prospects of Washington and Brussels positively responding to this one either don’t appear good.

See: Stoltenberg address and what it means for world peace

American nuclear weapons are based in Europe exclusively under provisions of what NATO calls its nuclear sharing arrangement. Those bombs are currently in Belgium, Italy, Germany, the Netherlands and Turkey. NATO nuclear sharing not only provides the justification and terms for their deployment but also mandates that they are to be delivered by aircraft of the host countries and not of the U.S.

On the issue of joint nuclear drills and five European NATO nations hosting U.S. B61 tactical nuclear bombs, the following excerpts are from the Treaty on the Non-Proliferation of Nuclear Weapons.

Moscow proposed to Washington to return all American nuclear weapons from NATO countries to US territory in the context of reviewing security guarantees, Director of the Russian Foreign Ministry’s Department for Nonproliferation and Arms Control Vladimir Yermakov said in an interview with TASS.

“We insist that NATO’s ‘joint nuclear missions’ should be stopped immediately, all the American nuclear weapons be returned to US national territory and the infrastructure that allows their rapid deployment should be eliminated. This aspect is one of the elements of the package of measures proposed by us to Washington in the context of considering the issues of security guarantees,” he said.

According to the diplomat, “currently there are about 200 American nuclear air bombs of the B61 family” in five non-nuclear NATO countries. Thus, the alliance is capable of rapidly deploying nuclear weapons able to reach strategic targets on Russian territory. “[NATO countries] also retain the infrastructure ensuring rapid deployment of these [nuclear] weapons capable of reaching Russian territory and striking a wide range of targets, including strategic ones,” he pointed out.

At the same time, NATO engages non-nuclear countries in training for using American nuclear weapons against Russia. “Interaction between NATO member countries in joint nuclear planning is underway. NATO ‘joint nuclear missions’ take place with non-nuclear alliance members involved in training on the use of American nuclear weapons against us,” the diplomat stressed.

He noted that the US is modernizing its nuclear arsenal with a view of the increased applicability of such weapons in real conditions, above all, in Europe.“As for modernization, the US is consistently implementing a campaign on the renovation of practically all the components of the nuclear arsenal. The B61 air bombs in their newest B61-12 modification [see video below] will have a decreased or variable yield but increased precision. This raises the question, which containment scenarios justify such ‘calibration?’ This clearly means betting on a ‘higher applicability’ of such weapons under real conditions, first of all, in Europe,” the diplomat stated.

Video by US Air Force

The original source of this article is antibellum
Copyright © Rick Rozoff, antibellum, 2022