In response to a Twitter thread I made about the mounting evidence that the Ukraine war was deliberately provoked by the US empire to orchestrate regime change in Moscow, a former Obama administration State Department spokesperson has called on his followers to investigate my funding.

In a since-deleted Twitter post, Ian Kelly, who has held various White House positions under the Obama and Trump administrations including a year as State Department spokesperson under Hillary Clinton, posted the request “Somebody please follow her money” as a quote tweet to my aforementioned thread.

I drew attention to his post immediately, because holy shit what the actual fuck.

Is this account real? Is a former US State Department spokesman actually soliciting people to investigate my finances because I said the US instigated this war to advance pre-existing agendas? https://t.co/K4Ac35Hk8D

Kelly responded “Yep” when I asked if his unverified account actually belonged to a prominent White House diplomat. 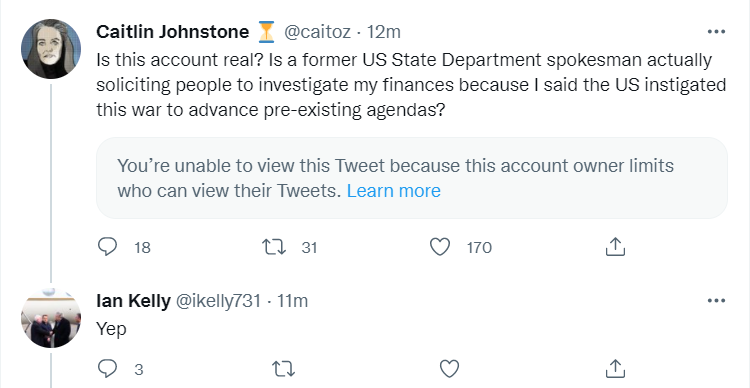 When I asked him what precisely is wrong with him, he responded with the image of a Ukrainian flag. That response as of this writing is still up on Twitter, while his other two posts have been deleted.

And yes this is indeed the Twitter account of “Ambassador Kelly”, who according to Wikipedia now teaches two courses at Northwestern University: “The Fall of the USSR and the Rise of Russia” and “Controlling the Russian Narrative, from Stalin to Putin”. His account has ten thousand followers and has existed since 2010, during which time its handle has been mentioned on the social media platform by prominent neoconservative narrative managers like Bill Kristol and Anne Applebaum as well as mainstream journalists, think tanks and other former US officials.

Here’s our boy with the lady herself:

Oh, what could have been, and could still be. Secretary Clinton hosts a symposium on The #FutureOfDiplomacy at Georgetown. Lots of HRC alums and future diplomats. pic.twitter.com/gulVYVbG0W

And I guess I should state for the record that there is nothing nefarious about my funding. I am an entirely reader-supported writer and I have never (as far as I know) received any money from the Kremlin or from any other foreign government. I’m literally just an Australian woman who says her opinions and observations on the internet with the help of her American husband and the financial support of patrons who enjoy those writings. You might not agree with those opinions, but that doesn’t mean I’m being paid by Vladimir Putin to voice them.

And it’s very strange how often I have to explain this to grown adults. This shockingly high-propaganda, high-censorship new media environment we’ve been in since the start of this war is making everyone bat shit insane.

The source of my funding is linked directly at the top of my Twitter page, and at the bottom of every article I write. My Patreon account is on the most transparent settings allowed by the platform. I wrote an article last year explaining the interesting way I’ve been able to make a living doing what I do titled “My Experiments With Hacking Capitalism“, which in my humble opinion contains a lot of useful information for all content creators who oppose the oligarchic empire. I’m actually pretty cool if I do say so myself.

My Experiments With Hacking Capitalism

“I just realized I’ve never really written about how I make a living doing what I do, which is odd because it’s easily the most interesting aspect of my weird little operation here.”https://t.co/cUZpMv99em

It’s really not sane that I should have to say any of these things, though. People shouldn’t have to defend themselves from HUAC-style witch hunts for criticizing the most dangerous impulses of the most powerful and destructive government on earth. Every single day now I’m getting dozens of people in my online notifications calling me a Kremlin operative because these maniacal accusations have been so aggressively normalized in the anti-Russia hysteria that the general public has had drummed into their consciousness since 2016.

The fact that political insiders from the most powerful empire in history are beginning to feel comfortable just publishing baseless accusations like this about random strangers on the internet says a lot about how crazy these mass-scale imperial cold war psyops are making everyone.