Let me start today’s write up out with two reading recommendations.

Lambert Strether and Yves Smith at Naked Capitalism discuss a piece on the Russian operation in Ukraine that had been printed in the Marine Corps Gazette and of which facsimile pictures were published two weeks ago on Twitter and later in full at Reddit and by Southfront.

I had read the Gazette piece when it first appeared some weeks ago and found it excellent. It realistically depicts the early Russian move towards Kiev as a feint. This is also my view. The feint, with too few troops to actually occupy Kiev, had a political and a military purpose.

Politically it put pressure on the Ukrainian government to quickly agree to Russian conditions for a ceasefire. This nearly worked when negotiations between Russia and Ukraine at the end of March in Turkey had promising results. The talks were then sabotaged by Boris Johnson’s intervention in Kiev where he, speaking for Joe Biden, demanded a continuation of the war which Zelensky then promptly provided.

Militarily the feint had near prefect results. Some 100,000 Ukrainian troops were fixed around Kiev while Russian troops from Crimea moved nearly unopposed to connect the island via a land bridge to the Donbas and Russia and also grabbed a large foothold in Kherson on the west side of the Dnieper.

The hasty feint had a high price in the form of Russian casualties but helped to established front situations in the east and south that allowed for the mass destruction of Ukrainian forces with a minimum of casualties on the Russian side.

When the feint towards Kiev was no longer useful the Russian forces moved back to their starting positions without much fighting. The Ukrainian claimed that to be a victory but they had hardly anything to do with the well planned and executed retreat.

That the Gazette would print a piece that confirms this view is remarkable. Even more remarkable, as Lambert notes, is the lack of echo it has had in U.S. media:

This is August 14. “Marinus”‘s article in the August issue of MCG has been available since July 29 at the latest, the first hit at the Japanese source. The second hit appears on August 9, in a Russian-language aggregator. The third appears August 12, on Reddit. It’s been two weeks, and the media, collectively, have a ravenous news hole. So where is the coverage the Times? Where is the Washington Post? Where is Foreign Policy? Where is Foreign Affairs? Where is The Atlantic? Where is the Council on Foreign Relations? Where is the Institute for the Study of War? Where, further afield, is Defense One? The Drive? They are all silent. And yet what we have, as the quote in the headline to this post alone shows, is a significant break from orthodoxy on Ukraine and Russian capabilities generally in the professional magazine of the United States Marine Corps. Odd, very odd!

Today I learned that the anonymous ‘Marinus’ author of the Marine Corps Gazette piece is allegedly the retired General Karl Van Riper who is well know for spoiling the Millennium Challenge war game by applying realistic conditions. The guy is hated by the chairborne divisions in the Pentagon. BTW – a facsimile of the first part of Marine Gazette piece is available here. Another excellent Gazette piece on the Russian way of fighting from January 2022 is here.

Still another excellent paper I found through a link at Naked Capitalism is by Myrmikan Research which looks at the historic context of the war through the centuries old British Russian rivalry: A World Gone MAD.

Now back to the daily business.

The New York Times continues its shameless pro-Ukrainian propaganda campaign that is deceiving its readers.

Wars are about geography and geography is depicted in maps. 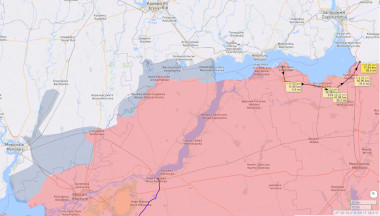 The NYT does not provide any maps to its readers. That leaves them uninformed about the geographical realities of the war and is abused to provide lies to them.

Shelling on a nearby town kills an employee of the Zaporizhzhia nuclear plant.

Shelling near a nuclear power complex in southern Ukraine killed a foreman from the facility at his home in a neighboring town, Ukrainian officials said on Sunday.

The Ukrainian company that oversees the nation’s nuclear power plants, Energoatom, said that Russia had directed at least six shells at the town of Enerhodar, where most of the workers at the Zaporizhzhia Nuclear Power Plant live.

The town is under Russian occupation, and the Russians have blamed the Ukrainians for the shelling of the giant nuclear complex — Europe’s largest — and nearby residential areas, which has raised alarm around the world. However, the Ukrainians have said that it is the Russians who are firing on civilians, suggesting the intent is to discredit the Ukrainian Army.

The claim that Russians are firing at the NPP or the nearby town is delusional. The Ukrainian president Zelensky himself has said that Ukraine is firing at the ZNPP because Russian soldiers are there.

The United States and European Union have called for the establishment of a demilitarized zone, as the fighting in and around the plant and its active reactors and stored nuclear waste has sparked grave concern that an errant strike and resulting fire could cause a meltdown or release radiation.

Ukraine’s president, Volodymyr Zelensky, said in his nightly address on Saturday that Russia had resorted to “nuclear blackmail” at the complex, reiterating a Ukrainian analysis that Moscow was using it to slow a Ukrainian counteroffensive toward the Russian-occupied city of Kherson, where Russian conventional military defenses appear increasingly wobbly.

Look at the map. The whole area around the plant is under Russian control. How can there be any ‘fighting in or around the ZNPP’? There is none. There are only Ukrainian artillery impacts fired from the northern side of the Dnieper reservoir at the ZNPP.

There is also no way anything happening at the ZNPP that could ever ‘slow’ a Ukrainian counteroffensive on Kherson. A counteroffensive that for very different reasons can and will not happen.

Contrary to the fears of some analysts when Moscow launched its invasion in February, the more urgent nuclear threat in the Ukraine war now appears to be Russia damaging the civilian plant, rather than deploying its own nuclear weapons.

Russia has no discernible interest in damaging the ZNPP. The plant is under its full control and provides useful electricity to areas under Russian control as well as to the Ukrainian side:

In fields near Enerhodar, long lines of cars carrying fleeing civilians formed on Saturday, according to social media posts and another former engineer at the plant who has remained in touch with local residents.

“Locals are abandoning the town,” said the former engineer, who asked to be identified by only his first name, Oleksiy, because of security concerns. Residents had been leaving for weeks, but the pace picked up after Saturday’s barrages and fires, he said.
…
Ukrainian employees are not fleeing but sending their families away, said Oleksiy, who left in June. Enerhodar was built for plant employees in the Soviet period and had a prewar population of about 50,000.

That alleged flight (observed by someone who isn’t even there?) is also picked up in another recent NYT piece:

‘They are shooting day and night’: Civilians flee the contested region around a nuclear power complex.

ZAPORIZHZHIA, Ukraine — Increasingly frequent explosions near a vast nuclear complex in southern Ukraine and the shelling of a nearby town where many of the complex’s workers reside have accelerated a civilian exodus from the area.

About a thousand cars were backed up at a crossing point over the front line between Russian-controlled and Ukrainian-controlled territory, according to people interviewed on the Ukrainian side Sunday morning.

The flow of people fleeing picked up over the past week as explosions near the Zaporizhzhia Nuclear Power Plant became more frequent, Dmytro Orlov, the exiled mayor of the town of Enerhodar, said in an interview. He said that Russian troops were firing grad rocket artillery from the town’s outskirts.

Russia has continued to blame the shelling on Ukrainian forces; Ukraine has said Russia is shelling territory Russia itself controls in a bid to discredit the Ukrainian Army.

The piece comes with three pictures. 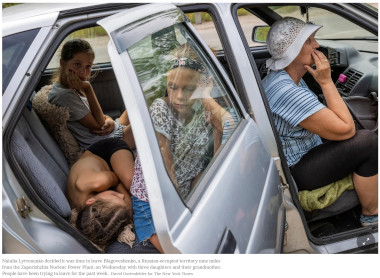 Natalia Lytvenenko decided it was time to leave Blagoveshenko, a Russian-occupied territory nine miles from the Zaporizhzhia Nuclear Power Plant, on Wednesday with three daughters and their grandmother. People have been trying to leave for the past week. David Guttenfelder for The New York Times

What I find curious about that picture is that there is no baggage visible inside the car. ‘That’s in the trunk’, you will say. Sure, but people fleeing from home usually take as much as possible with them – several sets of clothing, jackets, household items, memorabilia, books, duvets etc. The kids for example would take at least some of their toys. Nothing of such is visible here. 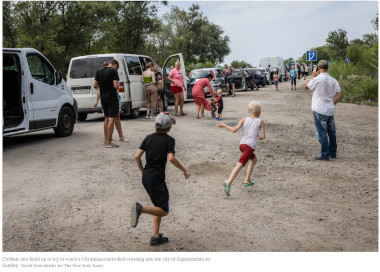 Civilian cars lined up to try to reach a Ukrainian-controlled crossing into the city of Zaporizhzhia on Sunday. David Guttenfelder for The New York Times

If this is the ‘crossing point over the front line between Russian-controlled and Ukrainian-controlled territory’ described in the piece quoted above, then the picture must have been taken from the Russian controlled side. How did Mr Guttenfelder cross into that area?

But maybe it is a complete different checkpoint somewhere on the city limits of Zaporizhzhia and the people waiting to pass it are coming back from a weekend getaway. Notice again the lack of visible baggage.

Now here is the third and most interesting picture: 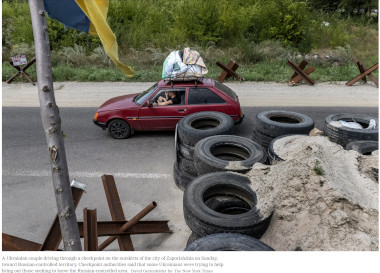 A Ukrainian couple driving through a checkpoint on the outskirts of the city of Zaporizhzhia on Sunday, toward Russian-controlled territory. Checkpoint authorities said that some Ukrainians were trying to help bring out those seeking to leave the Russian-controlled area. David Guttenfelder for The New York Times

Notice the baggage and household items on the car’s roof. Now that’s what I would call people fleeing form home to live elsewhere. But the caption suggests that these people ‘help bring out those seeking to leave the Russian-controlled area’. Why then did they load up their car with probably everything they had?

The NYT ‘coverage’ of the Ukraine conflict has stopped to make any sense.

3 thoughts on “Various Points On Ukraine And Media”