The BBC continues to misinterpret war news from Ukraine:

Residents in some areas were told to evacuate, city head Oleksandr Vilkul said, but he added the situation was under control.

Ukraine said the strike was revenge by Russia for its recent counter-attack.

President Volodymyr Zelensky – who was born in the city – described Russia as a “terrorist state” after the attack on the Karachunivske reservoir.

“You are weaklings who fight civilians,” Mr Zelensky said in his late night address on Wednesday. “Scoundrels who, having escaped from the battlefield, are trying to do harm from somewhere far away.”

This was an apparent reference to Ukraine’s recent military successes in a swift counter-offensive in the country’s north-eastern Kharkiv region. It has seen Ukraine’s army reclaim swathes of occupied territory, forcing Russian troops to retreat.

In his speech, Mr Zelensky said the reservoir had “no military value at all”.

Zelenski is an idiot.

The Ingulet river, which the dam restrained, flows mainly north to south through Kryvyi Rih (Russian spelling: Krivoi Rog, Кривой Рог) to then turn southwest before it ends in the Dnieper. 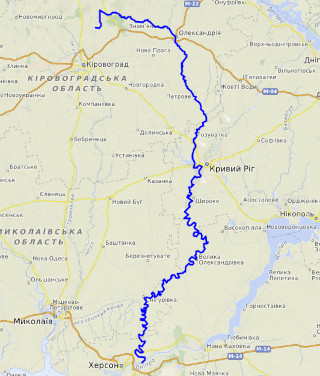 On its southwest flowing part it demarcated the border between the Ukrainian and Russian held territory. During the Kherson ‘counteroffensive’ Ukrainian troops had used pontoon bridges to cross the river and to attack on the southern side. The hopeless attack across bare steppe continued throughout the last days despite huge losses on the Ukrainian side. 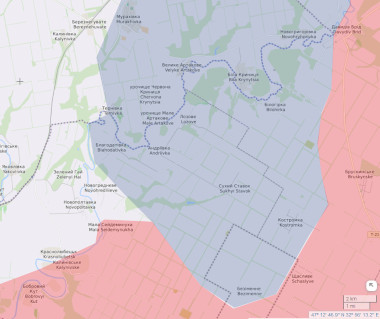 The hit on the dam was not in ‘revenge’ but will raise the Ingulet river and speed it up. It will wash away those pontoon bridges. The Ukrainian troops south of the river will be without resupplies and more easy to defeat. Or so the Russian’s hope …

The Ingulets river that dam was on has demarcated the border between Russian troops in Kherson and the Ukrainians. The Ukrainian’s crossed it for the Kherson ‘counterattack’ which is still proceeding. With the river now flooding they will be cut off from the northern side.

Here is a larger overview of the area. The Ukrainian position beyond the Ingulet is on the bottom left.

This attack had a clear military value. It is not a ‘terrorist’ act. Water diversions for military purposes are a standard tactic in larger military operations. In April the Ukrainian side flooded large areas north of Kiev to stop Russian troops from moving towards the city. As the New York Times reported at that time:

All around Demydiv, a village north of Kyiv, residents have been grappling with the aftermath of a severe flood, which under ordinary circumstances would have been yet another misfortune for a people under attack by Russia.

This time, though, it was a tactical victory. The Ukrainians flooded the village intentionally, along with a vast expanse of fields and bogs around it, creating a quagmire that thwarted a Russian tank assault on Kyiv and bought the army precious time to prepare defenses.

The residents of Demydiv paid the price in the rivers of dank green floodwater that engulfed many of their homes. And they couldn’t be more pleased.

After their large move into the Kharkov region, from which the Russian’s had withdrawn with only minor losses, the Ukrainian military has become a bit cocky. North of Kharkov it attacked Russian villages and positions across the border. Such attacks could help Russia to mobilize more troops. While the Russian military, aside from a big war, is not allowed to use conscripts in military operations abroad it can use those on the Russian side of the border. This significantly increases the pool of soldiers the Russian military can now use to counter Ukrainian moves.

Ukrainian troops also attempted to attack Lyman which is protecting the southern side of the remaining Russian positions in the Kharkov oblast. Professional Russian troops have now been moved there to replace Luhansk Peoples Republic’s militia which had held the city. They will remove the Ukrainian troops hiding in the forests north of the Siverski Donets river. 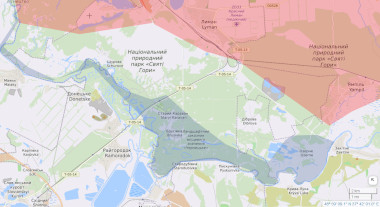 The Ukrainians also attempted several smaller counterattacks on Russian positions in the Donbas region. All of those failed.

An expected large Ukrainian attack in the south of the Donbas region towards Mariupol has not yet happened but the Ukrainian side has increased its reconnaissance activities in the area east of Zaporizhzhia.