Wow. Biden at a Dem fundraiser tonight: “We have not faced the prospect of Armageddon since Kennedy and the Cuban missile crisis.” He says Putin is “not joking when he talks about potential use of tactical,” nuclear or biological weapons because his military is underperforming.

Biden continued with the blunt warnings: “I don’t think there’s any such thing as the ability to easily (use) a tactical nuclear weapon and not end up with Armageddon.” (These 👀 quotes from pooler @tparti)

Biden going MUCH further than his officials have, from the National Security Council to the Pentagon. They have said they take Russia’s threats seriously, but haven’t seen any changes in its nuclear posture. Biden invokes Armageddon and says Putin should be taken seriously.

A copy of the pool report can be seen here. It quotes Biden as saying: “[Putin] is not joking when he talks about potential use of tactical nuclear weapons or biological or chemical weapons because his military is you might say is significantly underperforming.”

Fact is that Putin has not talked about the “potential use of tactical nuclear weapons or biological or chemical weapons.” Not. At. All.

On September 21 Putin announced a partial mobilization of reservists. In his TV speech he mentioned nuclear weapons only with regards to  ‘Western’ threats of using them:

They have even resorted to the nuclear blackmail. I am referring not only to the Western-encouraged shelling of the Zaporozhye Nuclear Power Plant, which poses a threat of a nuclear disaster, but also to the statements made by some high-ranking representatives of the leading NATO countries on the possibility and admissibility of using weapons of mass destruction – nuclear weapons – against Russia.

I would like to remind those who make such statements regarding Russia that our country has different types of weapons as well, and some of them are more modern than the weapons NATO countries have. In the event of a threat to the territorial integrity of our country and to defend Russia and our people, we will certainly make use of all weapon systems available to us. This is not a bluff.

The citizens of Russia can rest assured that the territorial integrity of our Motherland, our independence and freedom will be defended – I repeat – by all the systems available to us. Those who are using nuclear blackmail against us should know that the wind rose can turn around.

Note that Putin does not mention Russia’s nuclear weapons. He instead empathizes that Russia has new ‘different’ weapons that are ‘more modern’ than those of the ‘West’. He means hypersonic missiles which can avoid ‘western’ air defenses and hit decision centers in Brussels, London and Washington even without nuclear warheads.

Also for the record: Russia has signed and ratified the Biological Weapons Convention which prohibits the development, production, acquisition, transfer, stockpiling and use of biological weapons. Russia has also signed and ratified the Chemical Weapons Convention. In November 2017 it destroyed its last (Soviet) chemical weapons as mandated by the convention. It is the U.S. that still has not destroyed its chemicial weapons.

After Putin’s speech some war mongering noise that distorted  Putin’s speech was made by the White House. A few days later the deputy chairman of Russia’s Security Council, Dimitry Medevedev, set the record straight. There are only two distinct conditions under which Russia would ever use nuclear weapons:

“Let’s imagine that Russia is forced to use the most fearsome weapon against the Ukrainian regime which had committed a large-scale act of aggression that is dangerous for the very existence of our state,” Medvedev said in a post on Telegram.

Medvedev’s remarks quoted the exact terminology of one of the conditions of Russia’s nuclear strike doctrine: “aggression against the Russian Federation with conventional weapons when the very existence of the state is threatened”.
…
“I have to remind you again – for those deaf ears who hear only themselves. Russia has the right to use nuclear weapons if necessary,” Medvedev said, adding that it would do so “in predetermined cases” and in strict compliance with state policy.

NATO and Ukraine both believe that the Russian forces, even after receiving the 300,000 mobilized troops, will not be able to defeat Ukraine. This inability to achieve the desired objectives, they believe, will compel Russia to resort to the use of tactical nuclear weapons on Ukrainian targets in order to break the will to resist on the part of the Zelensky government.

No 1. “[I]n response to the use of nuclear and other types of weapons of mass destruction against it and/or its allies,” the 2020 Russian Nuclear Posture document states, or

No 2. “in the event of aggression against the Russian Federation with the use of conventional weapons when the very existence of the state is in jeopardy.”

U.S. nuclear posture, however, does allow it.

All the war mongering talk and reports about Russia’s alleged threat of nuclear weapon use in Ukraine is totally unfounded. That ‘western’ media suddenly engage in it shows that it is part of a well directed propaganda campaign. 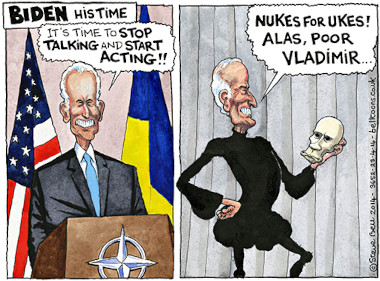 Meanwhile the Ukrainian comedian has called for ‘preemptive’ nuclear strikes on Russia:

President of Ukraine Volodymyr Zelensky believes that “NATO should make it impossible for Russia to use nuclear weapons.”

“Preemptive strikes are needed so that they know what awaits them if they use nuclear weapons. Not the other way around, waiting for Russia’s nuclear strikes and then saying, ‘oh, you’ve done that, then get this,'” he said on Thursday, speaking via video link at Australia’s think tank, the Lowy Institute.

‘Western’ media know that such a call is a big faux pas and lie about Zelenski’s request:

One must ask what this propaganda campaign about a non existing threat is really about. Could it be in preparation of a false flag incident in which a U.S or British nuclear device is used in Ukraine to then blame it on Russia as the pretext of an all out military engagement in Ukraine?

Setting off a tactical nuclear weapon as a pretext for a direct US and Polish military incursion into Western Ukraine – perhaps to preserve a Ukrainian rump state there, in the event that Kiev looks likely to fall somewhere down the line in the conflict.

False flags and/or WMDs are after all the indisputable standard US MO and playbook for pretexts for military action from the Spanish American War, to Vietnam, to Iraq, to Syria.

The Pentagon has been openly and proudly developing and deploying what they call “more usable” battlefield nuclear weapons, specifically for use against Russia and China.

And the US is the only country in history to have used nuclear weapons in war on another state, on entire Japanese cities full of people, actually.

Or – possibly could this be dog whistle signaling to the Zelenskiy regime or NeoNazi forces in Ukraine about just how to generate the extremis conditions to allow the US to jump directly into the conflict, much like how the US did the same with jihadist forces and chemical  weapons “red lines” in Syria.

With Zelenski becoming increasingly unhinged the ‘west’ should be careful what it wishes for.