In the face of the global climate crisis, which is now evident in the destructive force of meteorological events, the question arises once again as to how to deal with this phenomenon, the causes of which are associated with the civilizational model that has spread from the United States and Europe to the rest of the world.

Western governments, particularly those we call powers, are caught between trying to inflate the crisis so that the shock doctrine prevails or creating a cascading economic depression through default, greater than anything in living memory. It is no longer possible to keep borrowing more new currency to pay off the current debt because an energy-constrained real economy cannot grow much more, and because the Global North has reached “peak debt”.

Both the great economic crises of the last century (1930s and 1970s) and those of this century (after 2005 and the current one) were caused by energy shortages and the rising cost of everything else in the economy and their respective inflationary spikes.

BUT LET’S TALK ABOUT “CLIMATE CHANGE”. 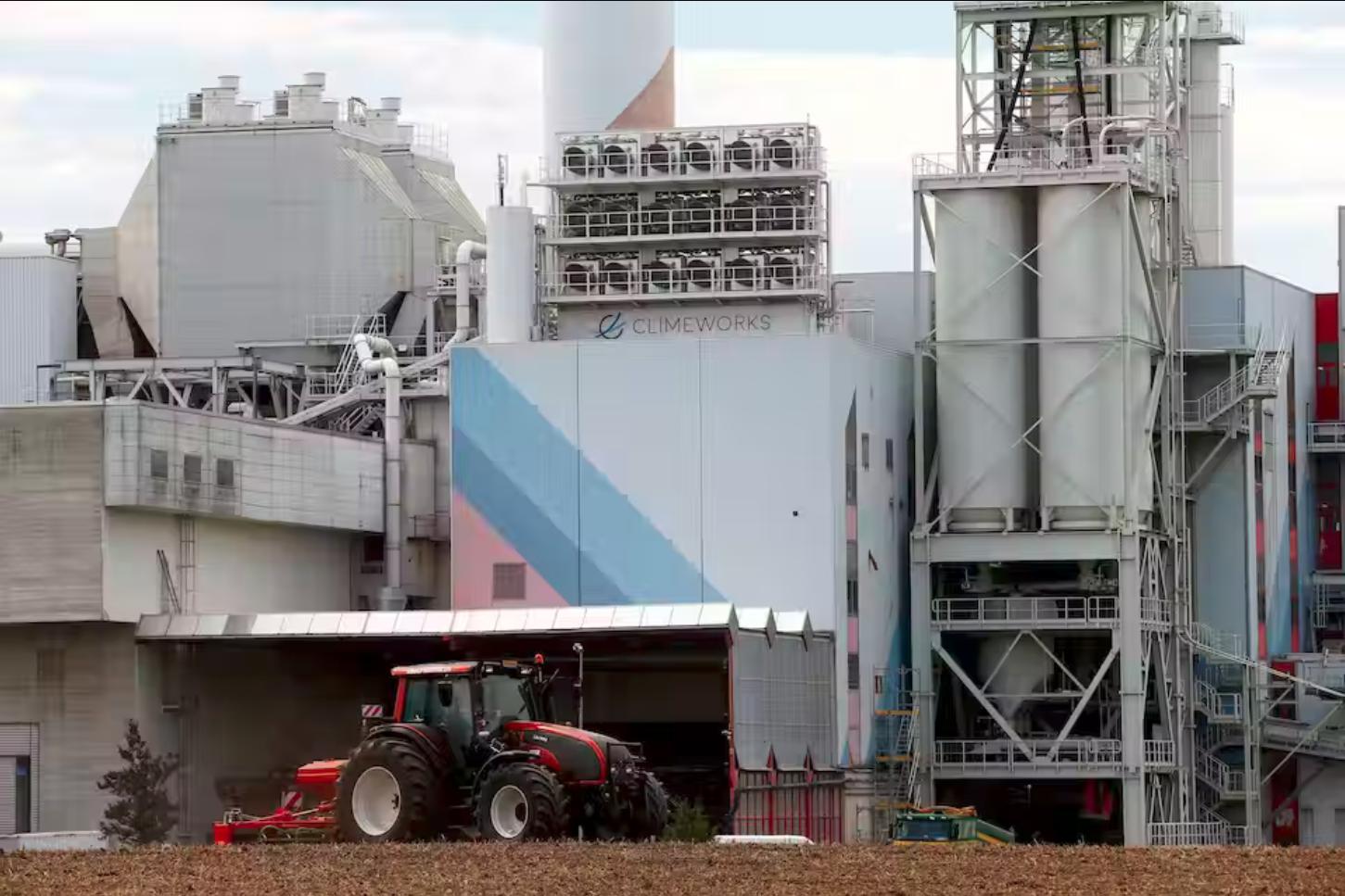 Climeworks is one of the few demonstration projects in operation to capture carbon dioxide from the air on the roof of a waste incinerator plant in Hinwil, Switzerland ( Photo: Reuters )

It has been instrumentalized by the media to use the so-called “climate change” to explain some of the events that actually derive from a system in the process of massive and multidimensional implosion. Such is the case of the provoked war in Syria or the so-called “climate refugees” from a plundered nation like Somalia.

It is worth noting that, in the early 2000s, the Republican “strategist”  Frank Luntz  baptized this as ” change” because it could create the impression that there was some “debate” on this issue, and it would fill the decisions to be made with doubts and denials. While “crisis” was dangerous and frightening, it forced one to question the structural causes of the problem. After several years, and valuable time lost, we no longer speak of heat waves but of “heat domes”, “mega-fires” or “mega-floods”.

The climate crisis is the direct result of there being too much carbon dioxide (CO2) in the atmosphere, so the solution would be to stop emitting more and even eliminate some of it. This idea is central to the world’s current plan to avoid catastrophe. Some milestones described in a a paper by a group of veteran climate scientists:

And so goes the “scientific community”, as the mirage of each magical technical solution disappears, another equally unworkable alternative appears to take its place.

GIVING UP OIL? THAT IS THE QUESTION

Seven out of eight people will have died in a year if we take away synthetic fertilizers, pesticides and petroleum-based herbicides and the ships, planes, trains and trucks that transport food from the field to the table; it does not seem an absurd figure. An example is the crisis experienced by some European countries in the face of gas shortages and rising prices, which predate the war in Ukraine, ever since the European neoliberal fever led them to privatize energy.

However, there are many sectors that claim or wonder whether it will be possible to “decarbonize” the energy systems that allow us to carry out our daily activities, but also to maintain a flow of capital and income to a wealthy minority.

One liter of oil contains 30 million joules of energy. This is equivalent to the work deployed by a person for 83 hours non-stop or to move a car (average weight between 700 kilos and 1 ton) up to 20 kilometers. If we are talking about gasoline or diesel (refined), they can provide up to 30% more power.

At the same time, one third of the energy consumed worldwide comes from oil and has sustained the “free market” economic scaffolding for some 200 years.

Oil allows the exchange of goods around the world, so the current weakness of capitalism is not only debt or financialization but the biophysical limits of the planet.

But within those limits is the amount of oil deposits, whose facilities for extraction are decreasing. In 2006 the maximum extraction point was reached, (peak oil)). This means that we will have less and less of the liquid and capitalism will not be able to continue to grow infinitely on a planet with finite and increasingly scarce resources.

As it is polluting, it has a greenhouse effect and is running out. For years, many international organizations have been proposing a change in the way of producing the energy that drives the world economy.

But reality, which is richer than theory, says otherwise: the Organization of Petroleum Exporting Countries (OPEC) warns that, although it will progressively lose weight in the world energy matrix, this does not mean its death or early extinction.

OPEC’s World Oil Outlook 2021  (World Oil Outlook 2045)  is that oil demand would increase in the long term from 82.5 million barrels per day (bpd) in 2020 to 99 million bpd in 2045. Its demand would grow less than before in the second part of the forecast period (2020-2045) and, although other energy sources, such as renewables, gas and nuclear, would grow strongly, oil is expected to retain the largest share of the global energy mix over the next 25 years.

In 2020, oil accounted for 30% of global energy needs. Together with the recovery of its post-coronavirus demand, its share is expected to reach 28.1% by 2045.

The reason is that not all countries are developed even though we are sold the promise that we will be. Demand in emerging, so-called undeveloped countries is expected to reach 46.3 million bpd in 2020 to 70.3 million bpd in 2045, growing at 1.7% per year over the forecast period. The growth in oil demand in these countries is mainly attributed to population growth and expanding economies in Asia, Africa and the Middle East.

In contrast, in the Organization for Economic Cooperation and Development (OECD) so-called developed countries, oil demand will decline in the long term from 36.3 million bpd in 2020 to 28.7 million bpd in 2045, with annual growth of -0.9%. This may be due to a further misalignment of economic growth due to structural changes and a policy push that continues to place greater emphasis on energy efficiency and the deployment of low-carbon technologies, the reports say. In addition, total oil demand will average 100.3 million bpd this year and by 2023 demand is expected to average slightly higher at 103 million bpd.

Germany, developed on cheap energy and raw materials like the entire Global North, responded to its energy crisis by reactivating coal consumption before the destruction of the Nord Stream 1 and 2 gas pipelines, while China is planning to build new coal-fired power plants and the recent installation of an unmanned oil platform in the South Sea.

No one, neither scientists nor politicians, can imagine that the target of 1.5°C increase in global average temperature and decarbonization of the economy can be reached. The Paris agreements (2015) are barely a memory while those of the Glasgow summit (2021) seem to be extinguished with the sanctions imposed by Washington and Brussels on Russian oil and gas.

The United States has abandoned the Paris Agreement and the European Union (EU) decided to include natural gas (fossil energy) and nuclear energy in the green classification or taxonomy. For his part, Chinese President Xi Jinping warned last January against an energy transition that interferes with the “normal life” of the Chinese.

AWAKENING FROM A CHIMERA

The Global North rose to power on the back of cheap energy; it will not be easy for any country to stop what it considers to be its right to develop, neither the developed countries nor those aspiring to do so. Falling out of the bed of infinite progress has its conflicts and is what, at bottom, the modern world is experiencing today.

As it embarked on telling it to “switch” to a crisis, the so-called international “community” postponed the time to stop the accelerated use of fossil fuels by sharing future emissions equitably.

The models used by the scientific “community” (if the abuse of quotation marks is permitted) represent society “as a network of idealized and unemotional buyers and sellers”, as the group of concerned scientists put it. The complex social and political realities and the biocultural diversity of each nation do not appear in these models, because it is not possible.

The messianic promise that market-based approaches will always work has collided with a rearrangement of the world that is in process but that seems to go beyond what is there, but distributed. The scientific world preferred to choose to limit policy debates to those most convenient for politicians and remained silent in the face of the unfeasibility of agreements such as the Paris agreement.

Curious that a standard of knowledge based on demonstrable truth continues to fantasize about 1.5°C increases or planting up to 1.2 billion hectares of timber trees, rather than allowing ecosystems to recover from human impacts and forests to regrow.

They made the human species dream that it was “change” and not crisis, that it could all fit into very complicated models, that debt was money. Today it seems that the world goes to war disappointed and with a tremendous hangover.

One thought on “Green Capitalism in Crisis: The End of a Chimera”