By Greg Palast updated from Truthout

Note: Palast covered Venezuela during the Chavez presidency for BBC Television Newsnight and The Guardian. Download, for free, the film of Palast’s BBC reports, “The Assassination of Hugo Chavez.” This article incorporates additional reporting by William Camacaro in Caracas.

On January 23, right after a phone call from Donald Trump, Juan Guaido, former Speaker of Venezuela’s National Assembly, declared himself President. No voting. When you have official recognition from The Donald, who needs elections?

I can explain what’s going on in Venezuela in three photos. 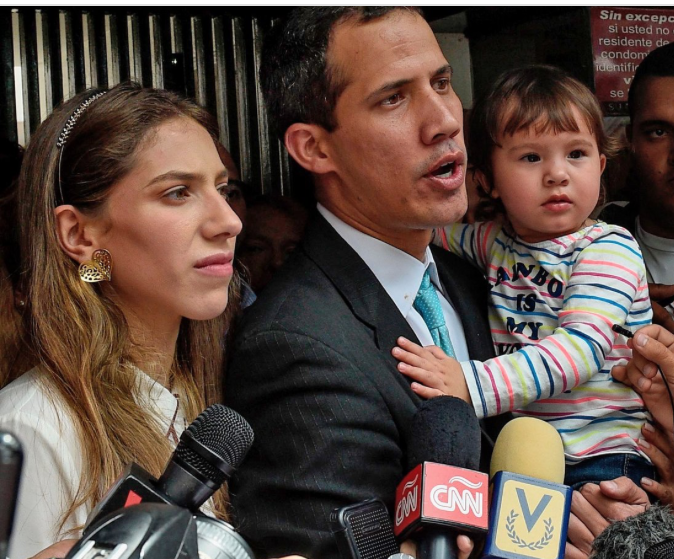 First, we have Juan Guaido, self-proclaimed (and Trump-proclaimed) president of the nation, with his wife and child, a photo prominently placed in The New York Times.

Next to it, the class photo of Gauido’s party members in the National Assembly.  They appear, overwhelmingly, white as snow— 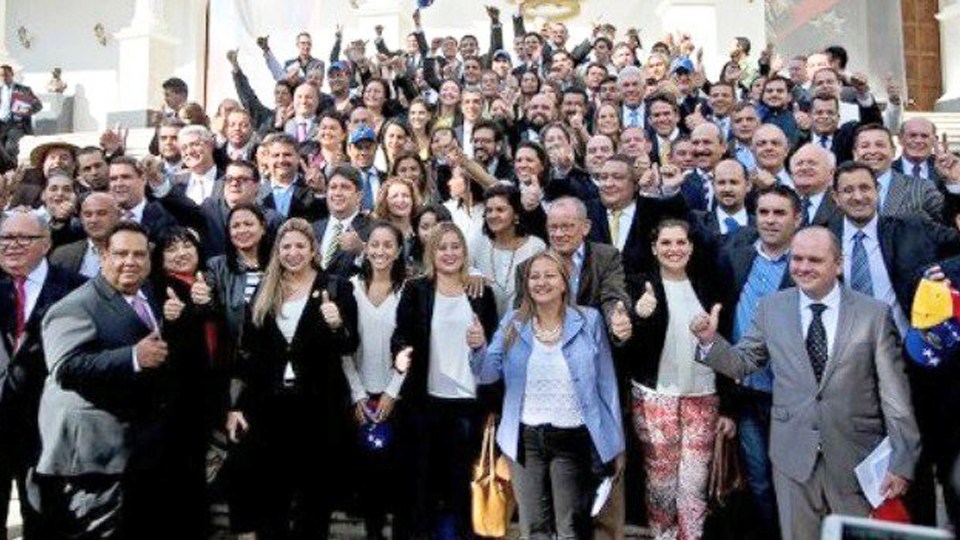 especially when compared to their political opposites in the third photo, the congress members who support the elected President Nicolas Maduro. The Maduro supporters are nearly all of a darker hue. 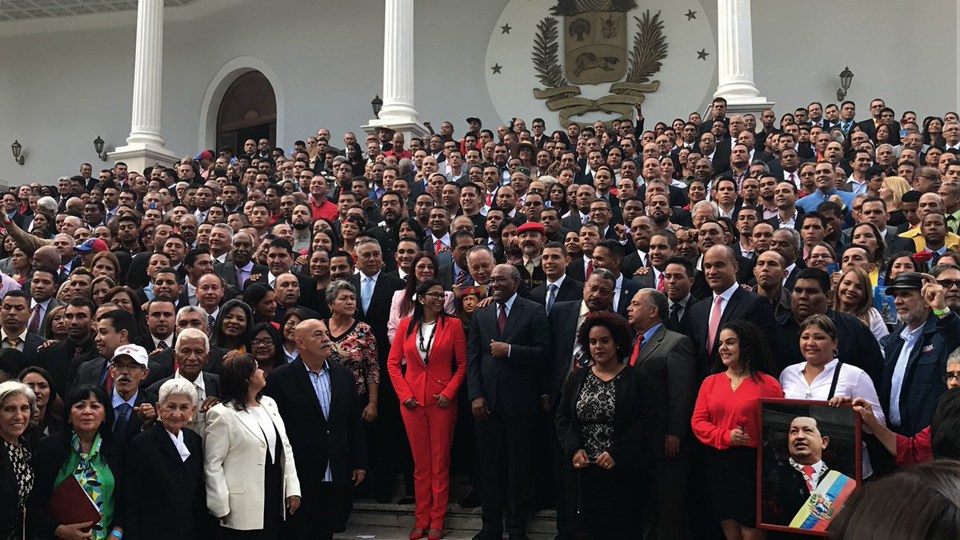 This is the story of Venezuela in black and white, the story not told in the New York Times nor the rest of our establishment media.  This year’s so-called popular uprising is, at its heart, a furious backlash of the whiter (and wealthier) Venezuelans against their replacement by the larger mestizo (mixed-race) poor.

Four centuries of white supremacy in Venezuela by those who identify their ancestors as European not tainted with Black or Indian blood came to an end with the 1998 election of Hugo Chavez.  The new racial color of power continues under Maduro, Chavez’ chosen successor.

Chavez:  “I am Negro e Indio”
In my interviews with Chavez for BBC beginning in 2002, he talked with humor about the fury of a white ruling class finding itself displaced by a man who was so visibly “Negro e Indio,” as he called himself.

In Venezuela, as in the USA, poverty and race are locked together.  Why did the mestizo poor love Chavez (and love is not too strong a word)?  As the US CIA’s surprisingly honest Fact Book states:

“Social investment in Venezuela during the Chavez administration reduced poverty from nearly 50% in 1999 to about 27% in 2011, increased school enrollment, substantially decreased infant and child mortality, and improved access to potable water and sanitation through social investment.”

But, just as Maduro took office, the price of oil began its collapse, and the vast social programs that oil had paid for were now supported by borrowing money and printing it, causing wild inflation.  The economic slide is now made impossibly worse because the Trump Administration cut off Venezuela from the oil sale proceeds from its biggest customer, the USA.  The UN rapporteur for Venezuela compared this to “medieval sieges, a crime against humanity.” 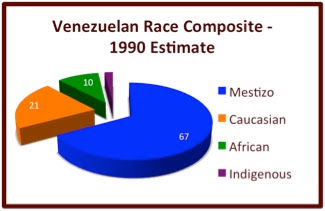 Everyone has been hurt economically, but the privileged class’ bank accounts have become nearly worthless.  So, knowing that the mestizo majority would not elect their Great White Hope Guaido, the ruling whites simply took to the streets – often armed. (And yes, both sides are armed.)

“Chavez, monkey!”
I’ve seen this movie before. When I look at today’s news reports of massive demonstrations against the so-called “dictatorship” of Venezuela’s left government, it looks awfully like 2002, when I was first in Caracas reporting for BBC Television.

Then, as now, The New York Times, NPR and other mainstream outlets in the US, reported on marches against the Chavez government, describing the tens of thousands of Venezuelans calling for Chavez’s removal. The light-skinned protesters were overwhelmingly wealthy—and they wanted you to know it. Many of the women marched in high heels, the men peacocking in business suits, proudly displayed in the uniforms of their privileged class. By contrast, the un-heeled Chavistas wore patriotic yellow, blue and red T-shirts, sneaks, jeans.

For the anti-Chavista protesters, race was an issue as much class economics.  When I marched alongside these opposition demonstrators, they shouted “Chavez, Monkey!” and worse.

You may not know this story of race war in Venezuela (and war is what it is), as the US press does not recognize its own racial bias.  In 2002, as today, the massive demonstrations of the whiter Venezuelans were reported as evidence that Chavez was wildly unpopular. Yet, the day after each anti-Chavez march, I would witness and film the pro-Chavez demonstrations that flooded Caracas with an ocean of nearly half a million marchers, dark and poor—that received little or no coverage in the US press. 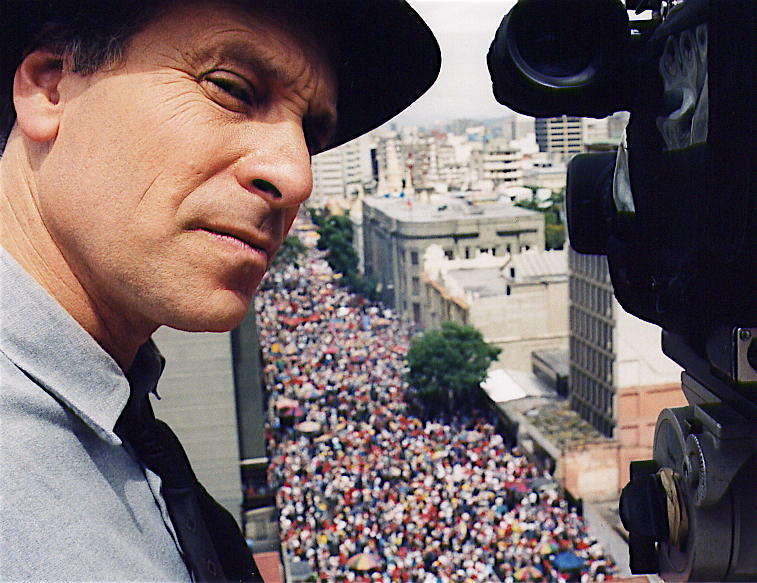 The bias continues.  The New York Times did not run a photo of this past week’s pro-Maduro demonstrations.  But in hard-to-find photos and reportsfrom my colleagues on the ground, the Chavista demonstrations are bigger, involving mass turnouts in several cities, not just wealthy neighborhoods in Caracas.

Why do the poor march for Maduro?  Even though the mestizo majority suffers today, they will not turn back to the pre-Chavez days of de facto apartheid.

Coup #2
And we must remember this is not the first time the US government has tried to overthrow the elected government in Venezuela.

In 2002, George W. Bush’s State Department cheer-led the coup. The plotters kidnapped Chavez and held him hostage. The coup was led by an oil industry leader and head of the Chamber of Commerce, Pedro Carmona, who had seized the nation’s White House, and, like Guaido today, declared himself president. Into my hidden microphone, Carmona told me proudly about the fancy inaugural ball held by the nation’s elite and attended by Bush’s ambassador.

But the Bush/Carmona coup collapsed when a million darker-skinned Venezuelans flooded the capital and forced the plotters to return their hero, the supposedly unpopular Chavez, to Miraflores, the Presidential Palace. “Presidente” Carmona fled.

Today, Guaido’s supporters, like Carmona’s, know they can’t win an election given the overwhelming fact of the newly empowered mestizo majority.  So Guaido has skipped the idea of an election altogether, simply replacing running for office with the “recognition” from Trump and allies which Guaido can’t get from Venezuelans.

Just like a Trump rally
When I see the images and hear the chants of the anti-Chavista demonstrators now, I’m also reminded of what I saw at a Trump rally in Macon, Georgia, this past November. The president slid out of Air Force One to tell the crowd—heavily weighted with white supremacists—that they needed to take back their country from those “invading” the border. Trump told them to fear gubernatorial candidate Stacey Abrams, who is Black, saying she would “turn Georgia into Venezuela.”

I don’t think Trump was talking about Abrams’ program to bring universal health care to Georgia, as Chavez did for Venezuela.

The US press is quick to condemn the racial hatred on display at Trump rallies.  But I have yet to hear or read in the US press what our eyes can see in the three photos from Venezuela: an uprising of white people wanting to “take back their country.”

A coup designed by the NSA
The putsch in Venezuela is carried out by the wealthy, internationally connected minority; but they are operating according to a regime-change plan designed in Washington John Bolton, Trump’s National Security Adviser, a neo-con re-tread.  The plan: to control Venezuela and its oil, as Bolton openly proclaims.

Ah, yes, the oil. It’s always the oil. And Venezuela has plenty to seize: the world’s largest reserves.

We’ll get to that in Part II.