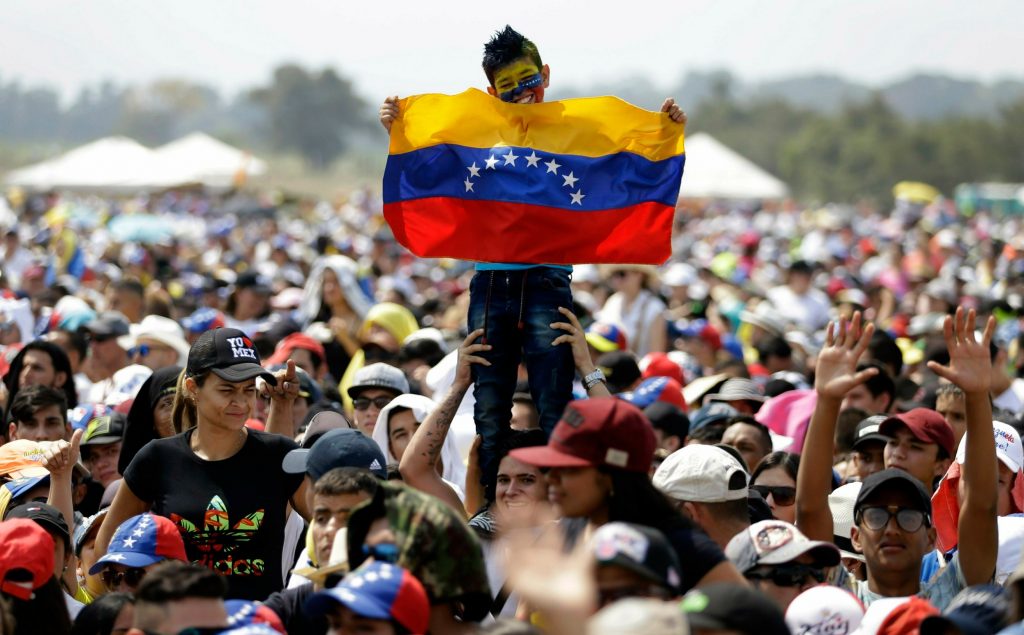 After the failure of provocation under guise of “aid” for imperialist intervention in Venezuela, the United States has initiated a move in the United Nations: a showdown with Russia over imperialism’s Venezuela-intervention plan.

In the UN Security Council (UNSC), the U.S. has distributed a resolution on Wednesday, which calls for “free, fair and credible presidential elections” and unfettered distribution of “aid” Venezuela.

The interventionists’ failure in the Colombia and Brazil borders is a significant setback for the self-proclaimed “president” Guaido, who sneaked out of Venezuela in violation of a travel ban.

A draft U.S. resolution for the UNSC meeting does not include any language that could be construed as the basis for a military intervention in Venezuela. This tact in language is an attempt to addressing concerns of countries unwilling to allow the Venezuela-incident turn into a war.

At the same time, interventionists are continuing propaganda for military move against Venezuela, which they claim as imminent.

“I think in the next two weeks we are going to see this thing bubble up and foment,” he told FOX Business’ Trish Regan Opens a New Window.  on Tuesday. “The aid has to get in there and importantly President Trump has made this sort of a line in the sand so he needs to do something that will effect or he needs to set the conditions that will effect the transition to Guaido for power.”

Tata tried to present pretext for the military move as he said, “If [Nicolas Maduro’s regime] choses to inject the Cuban-trained folks and others from Russia and Iran and Hezbollah, then I think that’s a good call for the United States to get militarily involved.”

However, Doug Schoen, author Opens a New Window.  of “The Threat Closer to Home: Hugo Chavez and the War Against America,” cautioned that the U.S. should gain consensus in the region before making such a move.

“We need to consider intervention but we need to get the conservative Latin American countries in the Lima Group, particularly Brazil, Argentina to join us,” Schoen said in a separate interview with Regan. “We have a sorry history of unilateral intervention in Latin America that has not worked out so well.”

92% of Venezuelans Reject US Military Invasion

He said, “92 percent of Venezuelans reject the U.S. military invasion”.

He emphasized that the population wants to solve their affairs without foreign interference.

Maduro was talking from the Miraflores Palace, the Government Palace.

The Venezuelan President also highlighted that over 80 percent of the population is in favor of dialogue, and reject the interventionism. The Venezuelan people want to look for an internal solution to their problems.

He said: “86 percent of Venezuelans support dialogue to address the problems of Venezuela and want them to be solved among Venezuelans, and Venezuelans only, without the intervention of anyone in the world.”

He added that the government is strong and nobody has thought about quitting or surrendering. “We have shown great strength, indestructible. The moral and political strength of the national collective is impressive,” said Maduro.

The Venezuelan leader said: The only possible response to threats of military intervention in Venezuela is deepening popular organization to defend the territory.

In these days of imperialist threats, the people have organized themselves, and we must organize ourselves more and more, one of the keys to our Revolution is mobilization, awareness and organization, he said.

He also asserted that the mobilization of the Venezuelan people demonstrates their struggle and their conviction to overcome adversity. “This is the people that come down from the streets, from the communities, we are real, we are the majority,” said Maduro.

The government of Venezuelan President Nicolas Maduro has the primary role in the organization of foreign humanitarian aid deliveries and this assistance should be provided at the request of the country’s authorities, said the Russian-sponsored draft UNSC resolution.

The document also stresses the need to conduct political dialogue including the implementation of the Montevideo mechanism.

The Montevideo mechanism, which was proposed by Mexico, Uruguay and the Caribbean Community, envisages four stages for resolution of the problem — the immediate launch of a dialogue between the Venezuelan sides on the situation in the country, negotiations process, drafting of an agreement and implementation of the deal.

The settlement of the current situation in Venezuela should be achieved through peaceful means and the threats to use force against Venezuela raised concern, the draft resolution said.

Leaders of the Caribbean Community (CARICOM) reiterated their support for a peaceful solution for Venezuela and roundly rejected any interventionist tactics in the country like those proposed by the U.S. government under Donald Trump and the Lima Group heads of state.

“Our community could be justifiably proud of our stance and efforts to help the people of Venezuela resolve their crisis,” said CARICOM chairperson and host Prime Minister Dr. Timothy Harris.

“I have no doubt in my mind that the principled position taken by CARICOM working with like-minded countries has prevented so far a catastrophe on our borders. We will continue to urge that dialogue is the only way to achieve a lasting solution,” said Dr. Harris Tuesday.

Mexico’s President Andres Manuel Lopez Obrador (AMLO) has also long-supported dialogue, and the opposition to find a peaceful resolution and Tuesday offered his country as a summit site for such talks.

“The doors of our territory are open for dialogue and intermediation so that there can be dialogue (carried out) by Uruguayans, many diplomats of the world, the U.N., (and) including Pope Francis,” said the Mexican president.

Social representatives from 85 countries are bearing witness to what is really going on inside the Bolivarian country.

Since February 24, about 400 social leaders from 85 countries attended the International Assembly of Peoples in Solidarity with the Bolivarian Revolution and Against Imperialism, held in Caracas.

Considering biased the mainstream media reports on Venezuela, many of those joining the meeting expressed surprise at what they found.

“In Brazil, before my trip, my family told me: be careful, prepare yourself. At home there was a lot of tension because the media showed that Venezuela was going through a full civil war, meaning a situation with bombing and shooting all the time,” said Jessy Dayane, vice president of Brazil’s National Union of Students.

The student leader said, “When we got here, however, we found a peaceful place. People are working and children are studying as usual.”

The MSM’s treatment of the Venezuelan situation, which has been largely generated by the U.S. economic sanctions, is not in keeping with the approach taken to report other Latin American realities, which suffer problems that are more serious.

Madgriel Sanchez, from Action for Working Class and Constituent Citizenry, said she understands the MSM’s double standard, concealing important social issues in Mexico, one of the most violent countries in the Americas.

“In Mexico, 14 people are missing every day and 32 Mexicans are murdered, 10 of whom are women. We live in a violent country, much of which is controlled by gangs. We have a lot of environmental damage and social injustice. But we do not talk about it because it has become normalized. In Venezuela, we see people, simple they may be, living with dignity, with a very strong conscience and a very patriotic feeling of defending themselves.”

“Walking Sao Paulo streets [in Brazil] is dealing with homeless people,” Dayane, a young Brazilian, says and regrets that “many citizens have neither food nor work in my country.”

Participants visited Caracas neighborhoods to see the sentiment of the people living there for themselves.

“I saw a lot of joy. People are calm. We received many appreciative gestures for our visit. All media misinformation is aimed at justifying a U.S. military invasion”, Blanca Bonilla, a Salvadoran woman, said and added that “a military invasion is the most they can do. I’m sure of that.”

“Since the 19th century, we have had at least 14 foreign interventions in Mexico, a country whose economy is now controlled by the U.S. That is why we are subject to them,” Sanchez said and added, “although we have a new government, we have not been able to solve our violence-related structural problems, mainly due to the U.S. involvement.”

The International Assembly of Peoples articulates social movements, civil organizations and political parties from 130 countries. Its first meeting in Caracas marks not only the inauguration of this global anti-imperialist platform, which stated its solidarity with the people of Venezuela and its President Maduro.

A report by Prensa Latina said:

The South African trade union federation Congress of South African Trade Unions (Cosatu) reiterated on Wednesday its solidarity and support to Venezuela and expressed anger at the actions of the U.S.

In a statement, the Cosatu noted its disappointment at the recklessness of other Western countries such as France that support the hostile agenda promoted by Donald Trump’s administration.

It adds that the people of Venezuela must be given the opportunity to freely exercise their will and determine their own future and the election of their president without outside interference.

Cosatu recognizes Nicolas Maduro as democratically elected president in the Bolivarian Republic of Venezuela and the government he heads, the statement states.

It also calls for the solidarity of trade unions with Venezuela and supports calls for peace and dialogue in that South American nation.

The powerful trade union confederation asks the UN to stop the US aggressions against the Venezuelan people and to reaffirm the sovereign right of that State to maintain an independent social, political and economic development path.

It announces that Cosatu, which forms part of the governmental alliance presided over by the African National Congress, will continue its demonstrations in front of the U.S. Embassy in South Africa to stop its interference in that country.

Thousands of supporters of the Venezuelan President Maduro took part in a rally in Caracas on Wednesday. They denounced threats of military intervention in Venezuela.

They waved national and socialist flags, and signs that read, “Hands off Venezuela.”

They also commemorated the 30th anniversary of “El Caracazo,” a wave of protests that began in Caracas on February 27 of 1989, during which hundreds of demonstrators were killed by security forces.

“No to military intervention, of course not. We do not want our country to be attacked,” said Zulaica Campos, a Maduro supporter.

“We will not allow foreign boots to set foot on our soil,” Campos said.

Fire at govt-run food storage: may be terror attack

The governor of the state Vargas Garcia Carneiro said a terrorist attack is not discarded in the fire that took place Wednesday morning in one of the state-funded food storages at the port of the Guaira.

Transport Minister Hipólito Abreu suggested that what happened was part of the agenda of “counterrevolutionary sectors” in the country who seek by all possible means to overthrow the constitutional President Nicolas Maduro.

From now, local authorities have been ordered to immediately begin recovery work for guaranteeing the delivery of food supplies to the local families.