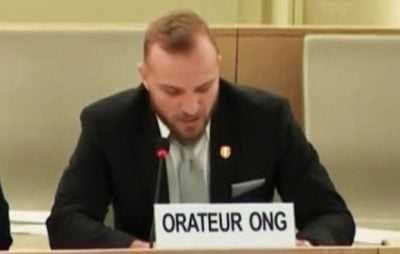 He concluded by stating that 28. Jun would use its Special Consultative Status with the United Nations to undertake an ambitious project which will focus on three key principles to ensure a unified path forward; Truth, Reconciliation and Prevention. The multi-ethnic and interfaith project is to span several months and will examine at the consequences of the bombing and their effect on the region today. The endeavor seeks the support of the international community and will culminate with special sessions at the United Nations in New York and Geneva to be chaired by 28. Jun.

Twenty Years Ago: NATO’s War of Aggression against Yugoslavia: Who are the War Criminals?

Full text of the speech is below.

It is an honor to be with you all as a representative of 28. Jun to share our analysis on how to best combat the many faces of religious discrimination in the Western Balkans.

First and foremost, the region must come to terms with its past before boldly stepping into a shared future. This Sunday, March 24th, will mark the passing of 20 years since the illegal NATO bombing of Yugoslavia — the day is vividly etched in my memory. I was in the 4th grade when cruise missiles laced with depleted uranium slammed into my hometown of Berane, Montenegro. The sirens wailed as my classmates and I hid, waiting for our parents to take us home.

Today Montenegro is a member of NATO and I have the distinction of being the only speaker here who hails from a country which bombed itself. NATO Secretary General Stoltenberg recently told us we were bombed for our own good and that joining the very same alliance which tested new weapon systems on our beloved country was in our interest.

Whatever the case, in order for the Western Balkans to move forward the international community must champion multi-ethnic solutions.

My organization intends to undertake an ambitious project, in which we will utilize our Consultative Status to focus on three key principles which will ensure a unified path forward; Truth, Reconciliation and Prevention. We sincerely hope the international community will back us in this endeavor.

In closing I will again reminisce to my childhood. The F-16 which bombed my country can reach altitudes of 15,000 m, an impressive feat, impersonal to the killing and decades of subsequent suffering it was to inflict below. However — Orthodox, Catholic and Muslim alike will all agree on one thing; even at its peak, the plane still flew well below God and far short of justice. Now, 20 years removed from the tragedy, we must do better.