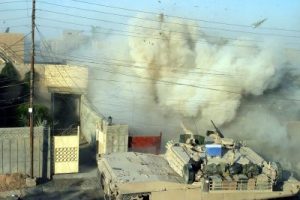 Souad Naji al-Azzawi, an Iraqi environmental scientist (and longtime contributor to Global Research), has devoted much of her professional life to studying one of the thorniest problems remaining from the years of war in her home country—the effect of depleted uranium weapons on the Iraqi environment and on human health.

Iraq’s environment suffered enormous damage in nearly four decades of war. Iraqi scientists, environmentalists and government continue to assess the extent of the effects of armed conflict on the country’s air, water, soil and on the health of its people.

Al-Azzawi, although she is technically retired and lives in Abu Dhabi, continues to publish research and to campaign on this issue, which has largely receded from public view, even though the problem has not gone away. In May, a private Qatar-based charity, the Arab Scientific Community Organization, published al-Azzawi’s paper, Modeling Depleted Uranium Contamination in Southern Iraq.

Depleted uranium—a waste product of nuclear power generation—is effective in anti-tank projectiles. The radioactive metal reaches high temperatures on impact with tank armor: hot enough to melt the armor into minute particles that are carried on the wind as dust. Environmentalists and many scientists argue that this radioactive dust contaminates air, water and soil, and has harmful consequences for human health—notably, conspicuously high incidences of cancer, leukemia and severe birth defects in areas where depleted uranium weapons were used.

“It’s not a subject that people are talking about much any more. I don’t know why,” said Renad Mansour, a research fellow in the Middle East and North Africa program at Chatham House who specializes in the reconstruction of post-war Iraq.

While database and Internet searches indicate the number of papers published on the subject has dwindled in recent years, al-Azzawi has not stopped publishing and campaigning. She lectures worldwide, and in recent years has appeared on Iraqi TV as a political commentator.

After receiving a bachelor’s degree in civil engineering from the University of Mosul in the early 1980s, she left Iraq—with her three children—for the United States, to study geology and environmental engineering at the Colorado School of Mines. The subject of her doctorate was the contamination of underground water by nuclear power generation.

Depleted Uranium and Radioactive Contamination in Iraq: An Overview

Al-Azzawi returned to Iraq in 1991, in the middle of the war that followed Iraq’s invasion of Kuwait. In 1996, as director of the doctoral program in environmental engineering at the University of Baghdad, she led a team that conducted a field survey to measure the effects of radiation on civilians and soldiers in southern Iraq in the aftermath of the war.

“People in the western part of Basrah city, and the Iraqi and American troops, received … a radioactive dosage about 200 times more than natural,” she wrote in an overview of the work.

At the same time, epidemiological studies conducted by faculty members of the Basra College of Medicine showed a correlation between depleted uranium contamination and disease. Cases of leukemia in children in Basra increased by 60 percent from 1990 to 1997, for example. In the same period, there was a threefold increase in the number of children born with severe birth defects.

“Nobody knew how to handle the problem,” al-Azzawi said. The wreckage of tanks and radioactive shrapnel lay near where people lived. “Kids were playing with the used bullets. The depleted uranium bullets were shiny and clean, and the kids would collect them and take them home.”

When the radioactive dust entered dust clouds, the contamination spread to cities.

The team’s work took nearly seven years and faced obstacles that came from within and outside Iraq. Domestically, their work was unpopular for painting an unfavorable picture of conditions in the country.

“Our work was scientific work. We were saying this [debris] is radioactive, it’s not safe for civilians. Everyone was attacking us, even inside Iraq. They said, ‘Those people [researchers] will make people migrate from Basra, and nobody is buying our fruit [from fear of contamination].’ We were just telling the truth.”

At the same time, Iraq was still under United Nations sanctions which throttled the Iraqi economy and isolated the country from the rest of the world. Researchers could neither publish their results abroad nor receive scientific publications published outside Iraq.

When their work became too dangerous to continue, the research team disbanded. In 2003 Al-Azzawi fled the country and found refuge in Syria where she was appointed as an administrator at Mamoun University for Science and Technology near Aleppo, one of the private universities established in the early days of the rule of Bashar al-Assad. The same year, she was given an award for education by the Nuclear-Free Future Foundation, based in Germany. She remained in Syria for the next seven years.

A soldier examines an armor-piercing round using depleted uranium to be used in a U.S. tank during Operation Desert Shield in 1991 (Photo: U.S. Department of Defense).

Proving, beyond reasonable doubt, a direct causal relation between depleted uranium and health effects remains difficult. “It is like cigarettes and cancer,” al-Azzawi said, referring to the prolonged struggle between American tobacco companies and scientists on cigarette smoking as a cause of cancer. Until a critical mass of research was achieved, the link could always be denied.

A Shroud of Secrecy

Obstacles to conducting this basic research remain, said Doug Weir, former Coordinator of the International Coalition to Ban Uranium Weapons, which campaigns for a ban on depleted uranium weapons.

“It’s hard to do the necessary research in Iraq,” Weir said. “Although there is civil society interest in Iraq about the effects of depleted uranium,” he said, the Iraqi environment ministry reduced the work of its radiation protection department when the rise of ISIS [the so-called Islamic State group also known as Da’esh] forced a change in their priorities.

Another obstacle facing research on the effects of depleted uranium weapons is the official secrecy that surrounds them. A stigma surrounds radioactive weapons that encourages government secrecy, Weir said. Data about where depleted uranium weapons were used must be painstakingly extracted from the United States government using Freedom of Information Act requests, he said.

Indeed, one of al-Azzawi’s remaining goals is to persuade the government of the United States to assume responsibility for the environmental impact of the depleted uranium weapons that were used in Iraq from 1990 onwards.

“You broke it, you bought it,” she says.

Featured image: A U.S. tank of the type that carried depleted uranium shells fires its main gun into a building in Fallujah, Iraq, in December 2004. A Dutch study found the U.S. used the radioactive shells in civilian areas (Photo: U.S.M.C./Wikimedia Commons).