The CIA is waging a campaign, which it portrays as “re-information,” claiming that Covid-19 originated in China while, at the same time, Russia is seeking to expose it as a US plot.

Thus, according to Reuters, the European External Action Service (EEAS) has issued an internal nine-page document highlighting 80 cases of disinformation (Fake News) allegedly disseminated by Russia to sow panic in the European Union [1].

According to the EEAS Disinformation Task Force, the Russian campaign centers mainly around the publication in the Oriental Review of an article by Australian academic Binoy Kampmark and of an analysis by Alexander Dugin posted in Geopolitica. However, neither of these authors can be accused of the slightest distortion of reality.

The question regarding the origin of the Covid-19 was raised on 12 March in a tweet from Zhao Lijian (photo), spokesman for the Chinese Foreign Ministry. He was reacting to the hearing of Robert Ray Redfield Jr, Director of the Center for Disease Control and Prevention (CDC), held by the House Oversight and Reform Committee of the US House of Representatives. When pressed, Redfield let it slip out that the Covid-19 had been detected on corpses of American people who were believed to have died of a seasonal flu. Zhao Lijian logically wondered whether the virus had not first appeared in the United States. He called for more transparency, but went unheeded.

On March 23, the Embassy of the People’s Republic of China in Paris (not that of the Russian Federation) tweeted three questions to the US authorities:

“First, how many cases of COVID-19 were there among the 20,000 deaths from the flu which broke out last September? Didn’t the United States attempt to use the flu to dissimulate the new coronavirus pneumonia?

The second concerns the surprise closing last July of the largest US biochemical weapons research center, the Fort Detrick base in Maryland [2]. After shutting down, a series of pneumonia or similar cases cropped up in the United States.

Third: why did several senior American officials sell off their shares before the stock market plunge, while at the same time assuring the American public that the COVID-19 epidemic in the United States was manageable?” 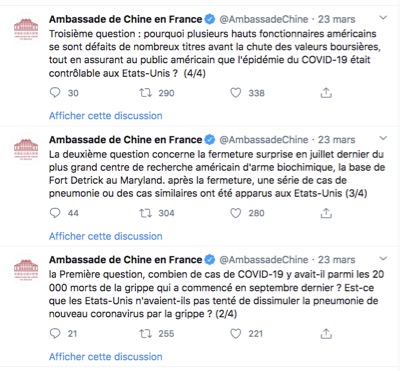