In an age of ‘lockdowns,’ is there any hope left for the WikiLeaks founder? 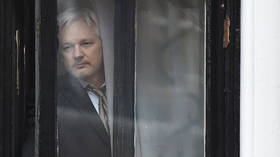 FILE PHOTO. ©  AFP/BEN STANSALL
At the latest RT-livestreamed ‘Free Julian Assange/Imperialism on Trial’ event in London, a team of distinguished speakers discussed international events and the prospects of the WikiLeaks founder avoiding extradition to the US.

What a difference six months makes. At the last ‘Free Julian Assange/Imperialism on Trial’ event in London, in February, a number of speakers declared ‘We are all Julian Assange.’

Little did they know that just a few weeks later, they too would be locked down, and their freedom of movement and association severely restricted by the government. Of course, no one is comparing being told not to leave your own home except to go shopping with what Assange has been through in Belmarsh high-security jail. But what did happen in March, and what threatens to happen again this autumn, serves as a reminder that no one is safe from having the liberties they took for granted snatched away from them by government diktat.

If the plight of Julian Assange tells us anything, it is that we should always be vigilant.

The former Labour MP Chris Williamson, opening proceedings, drew attention to the lack of political opposition to the treatment of Assange. He said that when he tabled an Early Day Motion in parliament in support of the WikiLeaks publisher, it only received five signatures.

Fidel Narvaez was a senior diplomat at the Ecuadorian Embassy in London where Assange took refuge for six years. In a lucid and powerful address, he explained how the ‘lawfare’ deployed to destroy Assange has also been used to criminalize leaders who defied US hegemony in Latin America, such as Rafael Correa, Evo Morales, Lula, and Cristina Kirchner. Trumped-up legal charges (no pun intended) was the way the empire preferred to dispose of its enemies.

“Basically lawfare has two arms, acting together,” Narvaez said. “The judicial and the media. First, the mainstream media kills the character and destroys his or her reputation. In the case of Julian, you can see how he was portrayed as a ‘rapist,’ a ‘hacker,’ a ‘narcissist,’ ‘Russian asset,’ ‘spy,’ ‘bad house guest,’ and anything else imaginable.”

Once you have discredited someone in such a way, Narvaez explained, then the way is cleared for judicial abuse.

Academic and literature expert Catherine Brown-Mercouris noted how, in the case of other journalistic scoops like the MPs expenses scandal, there was little focus on how these leaks occurred, whereas with Assange the focus is solely on that, and not on the great war crimes that WikiLeaks revealed. We live in a world where it is deemed a greater felony to leak details of war crimes than it is to commit them, which explains why Tony Blair and George Bush, who took us into Iraq in breach of international law, are still free men, whereas Assange is not.

Academic and literature expert Catherine Brown-Mercouris noted how, in the case of other journalistic scoops like the MPs expenses scandal, there was little focus on how these leaks occurred, whereas with Assange the focus is solely on that, and not on the great war crimes that WikiLeaks revealed. We live in a world where it is deemed a greater felony to leak details of war crimes than it is to commit them, which explains why Tony Blair and George Bush, who took us into Iraq in breach of international law, are still free men, whereas Assange is not.

Peter Oborne, one of the ‘big beasts’ of British journalism, defended mainstream journalistic standards after George Szamuely, a senior research fellow of the Global Policy Institute, had taken the New York Times to task for their reporting on ‘Russiagate.’ Oborne did say, however, that he was “extremely critical of our ‘beloved’ corporate press in the way it has covered, or not covered, the Assange story.” He said that Western media concentrate on dissidents held in countries deemed ‘hostile’ to the West, but not on those in their own country, of whom the most notable example was Assange. He described the WikiLeaks founder as being the “victim of a gross injustice.”

After the speeches, I compered a cross-talk-style Q&A session with Szamuely, Oborne and the former British ambassador to Syria, Peter Ford (the session starts at about 1hr 30mins in, if you’d like to watch it in full)

Szamuely doubted that the British courts would be able to stand up to US pressure on the extradition issue, but he thought that Assange might, paradoxically, have a better chance of winning his freedom in a US courtroom because of the brilliant activist lawyers there. It was also put forward that Assange may have a better chance of freedom if Trump lost in November, as then he might be pardoned by the outgoing president (along with Edward Snowden) in order to spite his enemies.

Further grounds for optimism, at least on appeal, came from a contribution from the floor, when legal expert Alexander Mercouris drew attention to the fact that the prosecution has issued new charges. That is not, Mercouris said, the sign of a prosecution that is confident of winning the case, but one which knows its case is weak.

Everyone who attended the meeting, organized brilliantly once again by Gregory Sharkey in very difficult circumstances, will have gone home thinking that there was still hope of a positive outcome. But even if there isn’t, and Assange stays behind bars for the rest of his life, the campaign to free him won’t have been in vain. In the words of Fidel Narvaez: “In my experience, the most futile struggle is the one that does not happen. So every one of us can and should fight from our own corner: lawyers, journalists, decent politicians.”

is a journalist, writer, broadcaster and blogger. His award winning blog can be found at http://www.neilclark66.blogspot.com. He tweets on politics and world affairs @NeilClark66