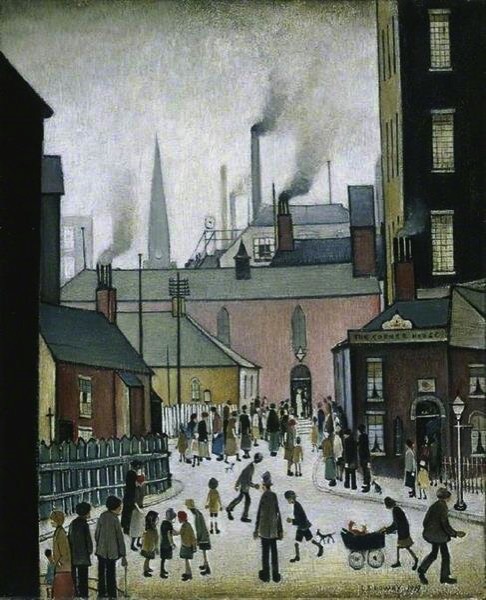 After the Wedding. L.S. Lowry.

No person is an island. It takes a village. Circle of Life. We are stardust. Seven generations. These truisms reference connections between people and what we owe each other. Appealing to chaos theory, an action, no matter how small, dominoes around the world. You accidentally wave at someone who looks like your friend Nevraj in Toronto, and a union goes on strike in Australia. In the same way, ecosystems interdigitate. Food webs explode beyond neat textbook boundaries, nutrients cycle between the atmosphere and the ocean, and capitalist extractive activities threaten everything. Everything. By appealing to these interconnections, we illuminate neon contradictions and build an eco-socialist theoretical base.

Let’s talk about a concrete example. Watching the new Netflix show Connected taught me that Saharan storms whip up tonnes of dust, which travels across the Atlantic Ocean. Some of this dust settles in the Amazon rainforest. And this is not just a factoid. Satellite-based studies suggest that 22,000 tonnes of phosphorus, originally from the Sahara, precipitates from the sky above the Amazon every year.[i] Scientists estimate that this amount matches how much phosphorus leeches from the soil due to annual rainfall and flooding. Desert and rainforest — it is hard to think of two ecosystems that clash more. But the dust of the former feeds the latter. Shits connected.

Studying cycles in nature perhaps fosters a desire for justice, for no person to go hungry or thirsty or homeless in a world of plenty. Studying how the capitalist machine disrupts these cycles, however, is deeply radicalizing. In the 19th century, the german academic Justus von Liebig described how nutrients cycle from the social to plants to animals and back to soil via waste. More crucially, Liebeg prescribed a system where foodstuffs are exported as a “robbery system” because nutrients are not returned to same soil. This idea influenced Marx, whose metabolic rift theory stated that “a rational agriculture is incompatible with the capitalist system” and its dependence on perpetual growth. Capitalists exploit not only the labour of the working class but also steal nutrients from the soil.

Liebeg focused his analysis on the second agricultural revolution in the British Empire (c. 1840s). Mass agricultural programs and the import of foodstuffs into the cities away from the countryside depleted the soil of its nutrients. To remedy the robbery of rural soil, the empire imported guano from Peru by the tonne and bones from catacombs in Sicily (among other sources of nutrients). This too was robbery. One striking testimony is that British military conscripts stood taller than their continental counterparts. Imperialism operates in such insidious ways.

To increase access to nutrients and resources around the world, imperial powers employed the ‘tools’ of genocide and slavery. Slaves and bonded Chinese labourers dug guano. Indigenous land stolen and indigenous people murdered. In Ireland, an exploitive class relationship prevented the tillers of the soil from replacing the nutrients lost by the export of crops. This set the stage for the widespread Irish Potato Famine of the 1940s.[ii] In turn, the famine provided the opportunity for landowners to evict peasants and labourers and consolidate land, furthering metabolic strain and opportunities for exploitation.

Broadly, the great famines of the 20th century — Bengal famine of 1943, Ethiopian famines of the 1970s, Bangladesh famine of 1974, and the Sahelian famine of 1973 — cannot be explained by performing Malthusian arithmetic. As Marxist Mike Davis describes, “the great hungers have always been redistributive class struggles.” It is not the case that there were simply too many people and too few resources, but that exploitive class and imperial relations leave people bereft in the face of plenty. As over a million people died in Bengal under British colonial rule, the Indian colony exported over 70,000 tonnes of rice to England.[iii] So despite more rainfall than preceding years, Bengali peopled starved while Britain hoarded resources.

There are so many other examples. Nestlé and other massive corporations pump water from colonized nations and indigenous land, which disrupts local ecosystems and threatens future access to clean water, all without (reasonable) compensation. The US supported a military coup in Bolivia in the fall of 2019, which would open the country to multinationals hoping to exploit local lithium supplies. While the indigenous in Bolivia would be left to deal with the toxic byproducts of lithium processing, multinationals make obscene profits. Similarly, the US and Canada supported a failed military coup in Venezuela, a country with large oil deposits. In Canada, our government sends the RCMP to assault Indigenous land defenders on unceded land to ensure the construction of a pipeline. Owners of capital and their lackey governments direct the flow of resources in one direction and for the sole purpose of exploitation.

The language of metabolic rift mirrors Marxist descriptions of class relations. This is how activists defend against the rhetoric of protestors and rioters “destroying their own communities” when they burn down big-box stores. That Walmart on fire did not belong to the community. It was not owned by the community or democratically operated by the community. It was a capital-extracting factory. That Walmart destroyed small businesses. It sucks the life out of the community, providing only meagre wages in return. Resources flow from the working class to the capitalist class, from the rural to the urban, from the colonized to the colonizer.

By impoverishing communities, the capitalists ensure their domination over workers. Wage slavery is only possible by denying access to the materials needed for social reproduction — food, water, shelter. As Marx said, “if the workers could live on air, it would not be possible to buy them at any price.” In such a way, capitalism and (particularly) colonialism achieve the dual function of robbing resources and creating the material conditions that allow for the super-exploitation of workers.

The capitalist demand for perpetual growth, in the agricultural sector and elsewhere, robs the future too. Marx wrote about how record crops in one year could so exhaust the soil that famine necessarily follows. Similarly, the need for more and more profit yields more and more extraction, which poisons the air and water. Greenhouse gas emissions and plastic waste impact us now but also threatens the future with irreparable metabolic rift. But the key takeaway is that not everybody suffers equally. The people who are destitute now will not be able to rehouse themselves after coastal flooding, rising temperatures, superstorms, and wildfires. Meanwhile, the billionaires of the world are prepping with underground bunkers and escape choppers.

What is the solution to all this? It is not the free market, which got us into this mess. The only way to live in harmony within the greater natural world is to get rid of the profit motive and build a democratic and centralized economy. Create what we need and do so sustainably. This does not mean eschewing technology but deciding as a community how to implement technologies. It means democratically deciding what we value. Because when those who work and live in a community decide collectively on their industrial activities, a balance is struck with natural processes.

Note: Inspiration for this post came from a talk given by ecosocialist Ian Angus, which is summarized here.