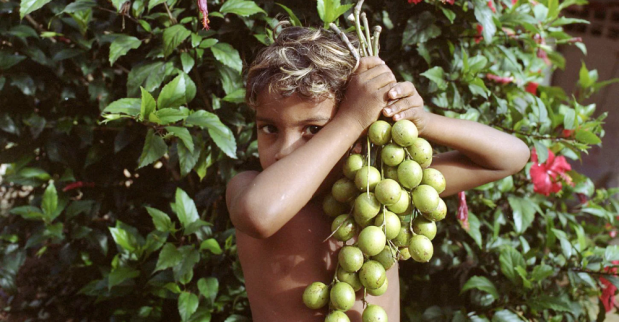 UN investigator Alena Douhan (2/12/21) “urges the US government to end the national emergency regarding Venezuela.”

Alena Douhan, the UN special rapporteur on the negative impact of unilateral coercive measures on the enjoyment of human rights, published her preliminary report on February 12 on the impact of US and European sanctions on Venezuela.

The report laid bare how a years-long campaign of economic warfare has asphyxiated Venezuela’s economy, crushing the government’s ability to provide basic services both before and during the Covid-19 pandemic.

“The [Venezuelan] government’s revenue was reported to shrink by 99%, with the country currently living on 1% of its pre-sanctions income,” Douhan found, impeding “the ability of Venezuela to respond to the Covid-19 emergency.”

the governments of the United Kingdom, Portugal and the United States and corresponding banks to unfreeze assets of the Venezuela Central Bank to purchase medicine, vaccines, food, medical and other equipment.

The campaign to overthrow the Venezuelan government, Douhan added, “violates the principle of sovereign equality of states and constitutes an intervention in domestic affairs of Venezuela that also affects its regional relations.”

Douhan’s report follows a Center for Economy and Policy Research (CEPR) paper that estimated that sanctions were responsible for over 40,000 deaths in Venezuela in 2017–18  (FAIR.org, 6/14/19). Though sanctions were not the only factor driving economic hardship, CEPR found that they:

exacerbated Venezuela’s economic crisis and made it nearly impossible to stabilize the economy, contributing further to excess deaths. All of these impacts disproportionately harmed the poorest and most vulnerable Venezuelans.

Like the CEPR study, Douhan’s report has been categorically ignored across establishment media.

By omitting the devastating impact of sanctions, corporate media attribute sole responsibility for economic and humanitarian conditions to the Venezuelan government, thereby using the misery provoked by sanctions to validate the infliction of even more misery. 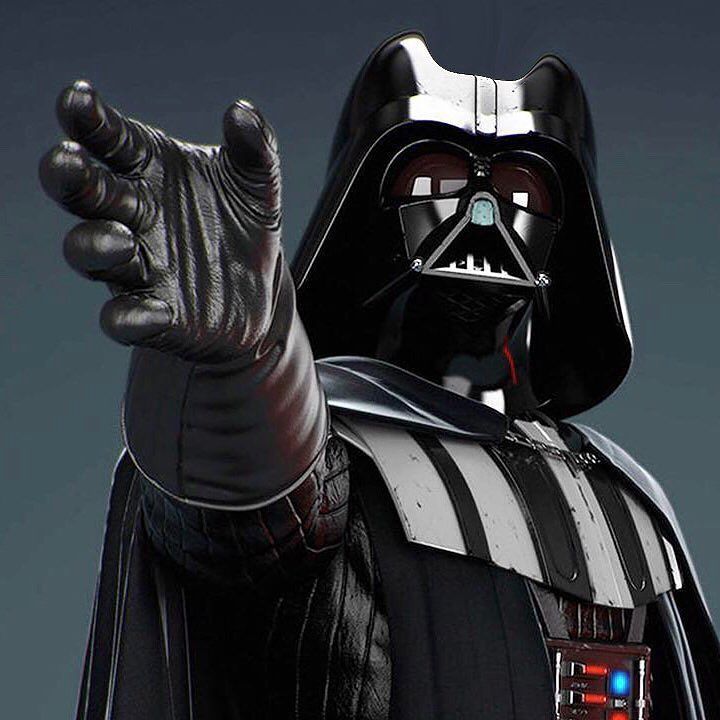 Darth Vader: seen by the US as a role model.

US and European officials have long admitted that the sanctions regime against Venezuela is collective punishment by design. Speaking to G20 foreign ministers in May 2018, then–British Foreign Secretary Boris Johnson announced:

The feeling I get from talking to my counterparts is that they see no alternative to economic pressure—and it’s very sad, because obviously the downside of sanctions is that they can affect the population that you don’t want to suffer. But in the end things have got to get worse before they get better—and we may have to tighten the economic screw on Venezuela.

The effect of the sanctions [against Venezuela] is continuing and cumulative. It’s sort of like in Star Wars when Darth Vader constricts somebody’s throat, that’s what we are doing to the regime economically.

A year later, as the Covid-19 virus spread globally, US Attorney General William Barr gloated that the pandemic was:

good timing, actually.… The [Trump] administration is taking a kind of “kick them while they’re down” approach, seemingly with the hope that by piling on sanctions and other actions, the administration can capitalize on the virus in Iran and Venezuela to spur greater public opposition to the incumbent governments and perhaps regime change.

“Although sanctions do not seem to be physical warfare weapons,” the Lancet (3/18/20) noted, “they are just as deadly, if not more so. Jeopardising the health of populations for political ends is not only illegal but also barbaric.”

Many Western journalists, however, appear not to have seen these overt declarations of collective punishment against the Venezuelan population—a crime against humanity under Article 7 of the Statute of the International Criminal Court, according to former UN Expert Alfred de Zayas. 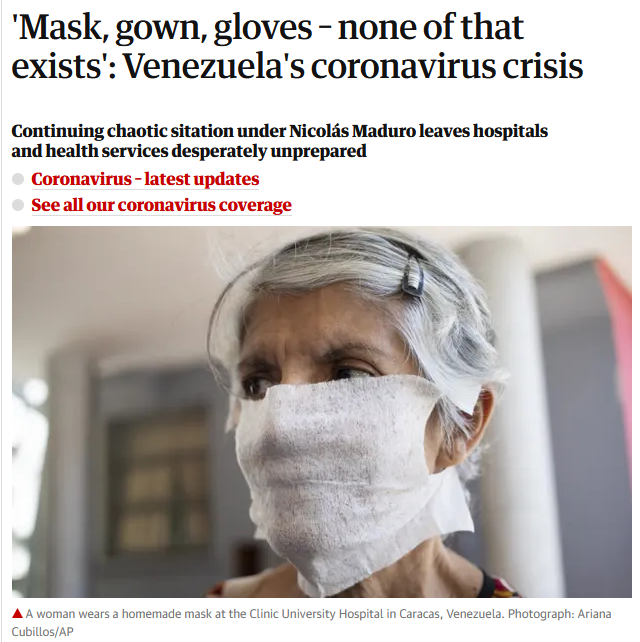 The Guardian (3/17/20) gets blame for Maduro into the subhead–but doesn’t mention sanctions until the penultimate paragraph.

Loath to abandon belief in the fundamentally benign nature of Western foreign policy, corporate scribes have typically presented the devastating effects of sanctions as a mere accusation of Nicolás Maduro. “Maduro…said US sanctions were hurting his administration’s ability to buy medicines and foodstuffs” was the next-to-last paragraph of a Guardian piece (3/17/20) on Covid in Venezuela whose subhead read, “Continuing chaotic situation under Nicolás Maduro leaves hospitals and health services desperately unprepared.”

Often, they fail to mention sanctions at all. In June 2019, for instance, the Guardian’s Tom Phillips reported that “more than 4 million Venezuelans have now fled economic and humanitarian chaos,” citing would-be coup leader Juan Guaidó’s claim that the country’s economic collapse “was caused by the corruption of this regime,” without making any reference to Washington’s campaign of economic warfare.

The issue is not that Western media are uninterested in Venezuela. In February 2019, the month after Juan Guaidó declared himself president, the Guardian published 67 separate articles about Venezuela, regularly citing the UN on Venezuela’s economic and humanitarian conditions—signaling Maduro’s sole responsibility for a crisis about which something must surely be done.

For example, the Guardian (2/27/19) reported in 2019, “The UN’s political and peace building chief, Rosemary DiCarlo, depicted a devastating collapse in Venezuela’s health system”—while making no reference to sanctions.

Similarly, the New York Times, whose editorial board had supported 10 out of 12 US-backed coups in Latin America since 1954, has regularly covered the deteriorating economic situation in Venezuela with—at best—only fleeting reference to US and European sanctions.

The New York Times (12/5/20), for instance, described how “Yajaira Paz, 35, has lost nearly everything” to the Venezuelan economic crisis: “her mother, dead from a heart problem she could not afford to treat; her brothers, to migration; her faith in democracy, to the nation’s crippled institutions” — omitting any mention of sanctions. 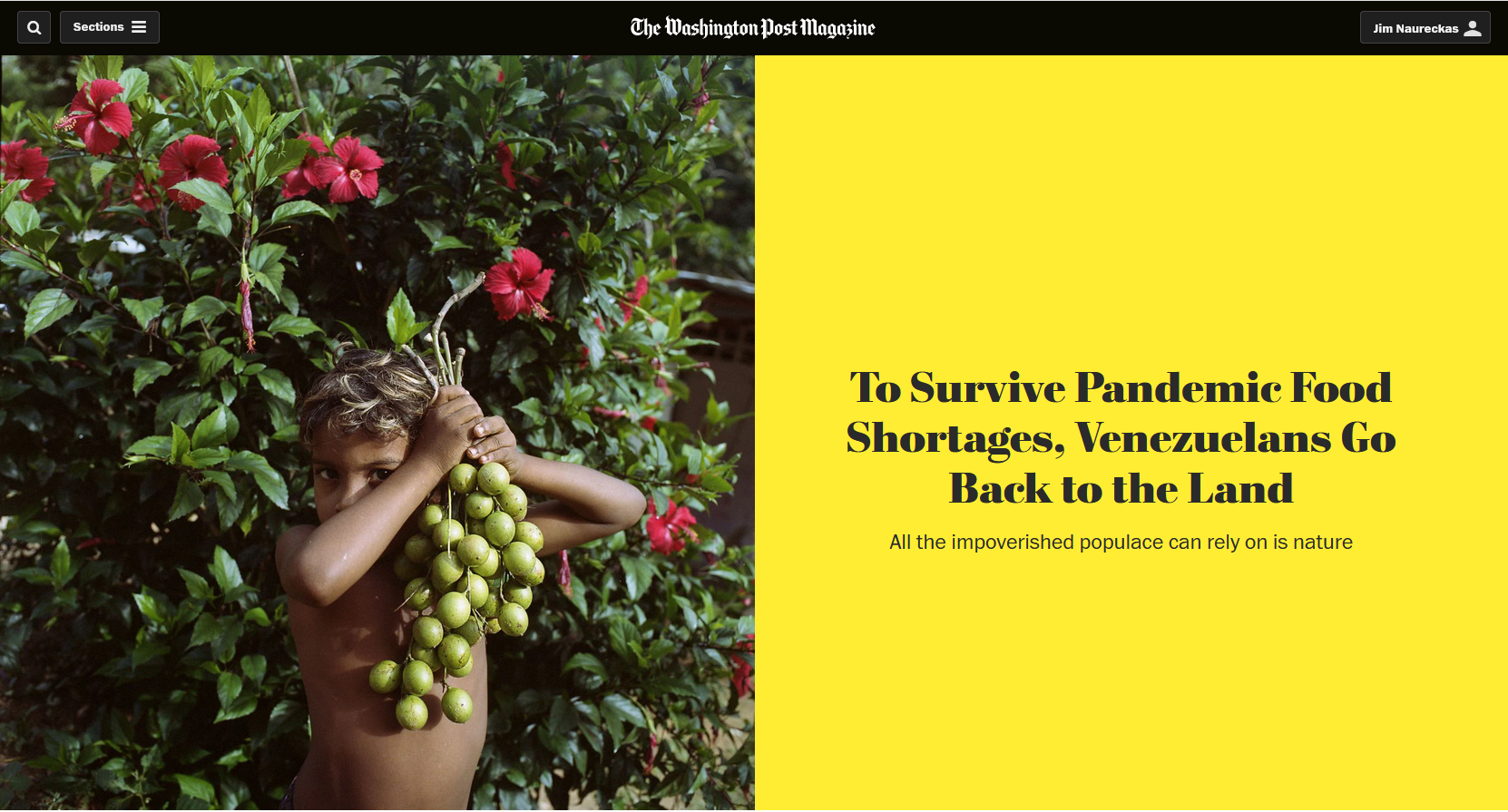 The Washington Post Magazine (3/3/21) reports that “most Venezuelans eat fewer than two meals a day”–but doesn’t mention that it’s US government policy to make their lives worse.

The Washington Post Magazine (3/3/21) ran a similarly emotive article, noting how “the pandemic wore away even more access to basic necessities in a country racked by deepening poverty and crisis,” blaming “the national mismanagement of resources” and, again, ignoring the existence of sanctions.

Corporate media thus consistently emphasizes the gravity of Venezuela’s humanitarian situation while overlooking crucial evidence on the catastrophic impact of sanctions, fortifying the very narratives deployed to justify the economic siege against Venezuela.

The collective silence over Douhan’s report is only the most recent case of propaganda by omission on Venezuela. By refusing to acknowledge Washington and London’s fundamental role in making Venezuela’s “economy scream,” corporate media play a key part in manufacturing consent for regime change.