Ten years after it began, and after a short lull in fighting, the war on Syria seems now to resume on several fronts. 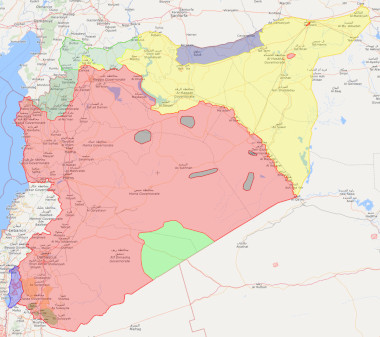 Last week Bloomberg published an op-ed by the Turkish President Erdogan in which he begged for ‘western’ help:

Now, as talk of democracy, freedom and human rights are in vogue anew, humanity’s actions in Syria will be the ultimate measure of our sincerity. I believe that restoring peace and stability in the region depends on genuine and strong Western support for Turkey.

Unfortunately, the moderate rebels, our local partners, have become the target of a coordinated smear campaign despite their hard work and sacrifice to defeat ISIS and the Kurdistan Workers’ Party, or PKK, another designated terrorist organization.

The safe zones, which Turkey created in cooperation with its local partners, are proof of our commitment to Syria’s future. These areas have become islands of peace and stability, as well as self-sustaining ecosystems.

Those ‘islands of peace’ in the Turkish occupied Idleb and along the Turkish border have seen lots infighting between the Al-Qaeda aligned Hayat Tahrir al Sham (HTS) and ‘moderate rebels’ of various Islamists hue. HTS has mostly won out and is ruling the area in cooperation with Turkish occupation troops. But to control the area costs lots of money and Turkey is currently short of it. Erdogan’s recent firing of its central bank head led to another fall of the Turkish economy:

The dollar rose by as much as 15% vs the Turkish lira, and the BIST-100 stock-market index traded 10% lower after President Recep Tayyip Erdogan’s decision to replace Governor Naci Agbal with Sahap Kavcioglu — the third change at the Central Bank of the Republic of Turkey (CBRT) in two years.

Thus Erdogan is asking for more money while threatening to push more refugees towards Europe:

The third and most sensible option [form the west] is to throw their weight behind Turkey and become part of the solution in Syria, at minimum cost and with maximum impact.

Our specific expectations are obvious. Primarily, we expect the West to adopt a clear position against YPG, the PKK’s Syrian branch, which attacks safe zones and plays into the hands of the regime. Instead, adequate support must go to the legitimate Syrian opposition as an investment in peace and stability.

Moreover, we call on the Western nations to live up to their responsibilities to end the humanitarian crisis, as failure to share Turkey’s burden may result in fresh waves of migration towards Europe.

Last but not least, we demand that the West invest in safe zones within Syria and unequivocally endorse this peace project. We must show the world that there is a democratic and prosperous alternative for Syria’s future.

On Friday Turkey opened a new military outpost in Syria near the Bab al-Hawa border crossing with Turkey. This is contrary to the Moscow agreement with Russia.

There have been several skirmishes between Turkish troops, the rebels they support and Kurdish SDF units which are ruling northeast Syria with support from the U.S. occupation.

Despite hostilities between them the U.S. supported Kurds do business with the Turkish supported Jihadis. The oil the Kurds pump from the Syrian wells is being sold to the ‘rebels’ in Idleb who export it to Turkey.

That oil export has recently become a target of the Russian forces. On March 7 a missile hit near al-Bab and destroyed 180 oil trucks. On March 14 another attack destroyed HTS controlled oil infrastructure in Idleb. In response the ‘rebels’ fired missiles into the government held Aleppo city after which another strike hit gas facilities near the Turkish border:

A gas facility was hit near Sarmada city in Idlib province and dozens of trailers carrying goods in a parking lot near the border crossing of Bab al Hawa were set aflame in the latest attack on fuel facilities that serve an economic lifeline for a region that is home to more than four million people.

Western intelligence sources say Russia was behind a ballistic missile strike earlier this month that set ablaze dozens of local oil refineries near the towns of al-Bab and Jarablus further east in a rebel-held area where Turkey holds sway and has a significant military presence.

In the north east the U.S. allied Kurdish SDF is still holding several thousand former ISIS fighters. Every few weeks some dozens get released. They are moved into the south eastern desert where the U.S. forces in al-Tanf at the Syrian-Iraqi-Jordanian border triangle [green] are presumably train and equip them. They then go on to attack Syrian government forces. As the rough desert makes it difficult to fight on the ground Russia renewed an air campaign against those ISIS remnands:

There are several goals behind the Russian airstrikes. Chief among them is securing the roads in the Badia region (the Syrian desert), limiting IS operations and military capabilities and curbing the spread of the organization in the Badia, which extends over Raqqa, Hama, Homs, Deir Ez-Zor and Aleppo provinces.

The conflict between the Kurds and Turkey in the north east is also resuming:

[I]n the Raqqah countryside, SDF reported that its fighters had repelled two attacks by Turkish proxies. The first was on the village of Saida west of Ain Issa. The second attack targeted the town of Mu’alk to the east.

No specific casualty numbers were released.

The area around Ain Issa has been volatile for a while now, with Turkey and its proxies frequently attacking the town’s outskirts. An Ankara plan to push and capture the town has been expected for months.

Likely in response to this, two rockets were launched from Syria towards the southern Turkish city of Kilis. According to Syrian sources, the two rockets were launched from the vicinity of the town of Tell Rifaat in the northern Aleppo countryside. The positions belong to the People’s Protection Units (YPG), which Ankara considers terrorist. The YPG is also the core of the SDF.

The Turkish army shelled a dozen of towns and villages in response to the attack. Heavy clashes were also reported between Kurdish fighters and militants of the Turkish-backed Syrian National Army west of the Turkish-occupied town of al-Bab.

Meanwhile Syria’s economy, hindered by sanctions, lack of oil revenues and the crash of the Lebanese banks, has further deteriorated. A war of hunger has replaced the war of guns.

With the tenth anniversary of the war many seem to have forgotten that it was the U.S. which started and fueled this catastrophe while it still has no plan how to end it:

The sad part of the joint statement by the US and its European allies is not only that it is rewriting history and spreading falsehood but conveys a sense of despair that there is no hope for light at the end of the tunnel in the Syrian conflict in a conceivable future.

The US policy in Syria is opaque. It has oscillated between aiming to prevent a resurgence of IS, confronting Iran, pushing back against Russia, providing humanitarian aid, and even protecting Israel, while the crux of the matter is that successive US administrations have failed to articulate a clear strategy and rationale for the US military presence in Syria.

A statement by the Biden administration today was quite friendly:

Jen Psaki, also added, “Turkey is a long-standing and valued NATO ally. We’ve shared interest in countering terrorism and ending the conflict in Syria, deterring malign influence in the region.”

It is quite possible that the Biden administration has plans to reset the current stalemate in Syria by allying with Turkey for new push against Damascus.