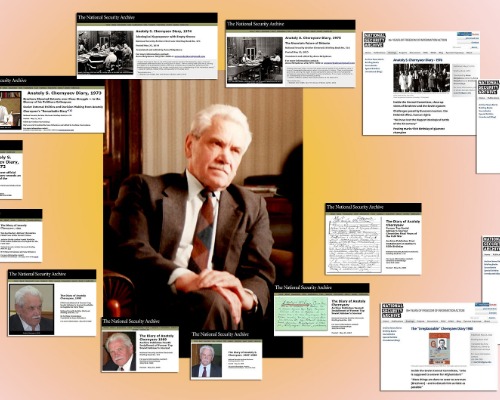 Washington, D.C., May 25, 2021 – The National Security Archive marks the 100th anniversary of Anatoly Sergeyevich Chernyaev’s birth with the publication of the first English-language translation of the Chernyaev diary (described as “irreplaceable” by Pulitzer-Prize-winning author David Hoffman) for the year 1981.

The new Chernyaev diary publication is the latest in a series of the Archive’s translations and postings covering not only his extraordinary years from 1986 to 1991 at the right hand of Mikhail Gorbachev as his senior foreign policy adviser, but also Chernyaev’s unusually frank view at the highest levels of the Soviet Union over its last 20 years.

His diary for 1981, published for the first time in English today, provides remarkable insights into the Brezhnev era, and especially into one of the most critical issues of the year, whether or not the Soviet Union would invade Poland to suppress the Solidarity movement, as it had in Czechoslovakia in 1968 to suppress the Prague Spring, or in 1979 to put its favored Communist in charge of Afghanistan.

In perhaps the most remarkable passage from the 1981 diary, Chernyaev remarks, “if the Sovietologists and Kremlinologists’ fantasy came true and they got to be a fly on the wall at a session of our PB [Politburo], later nobody would ever believe this ‘fly.’  They would think he is fooling them or has lost his mind.”