The Brits were getting a bit uppity today so the Russians responded by opening fire:

A Russian patrol ship and fighter jet have fired warning shots after the British destroyer HMS Defender violated the country’s border in the Black Sea. The UK embassy’s defense attaché has been summoned by officials in Moscow.

According to Russia’s Ministry of Defense, the British naval ship entered the country’s territorial waters at 11:52am local time and traveled 3km inside the frontier, near Cape Fiolent, in Crimea. The peninsula is not recognized by the United Kingdom as Russian land and London believes it to be illegally occupied Ukrainian territory.

The Brits denied that any shots were fired at(!) them:

UK Defense Ministry claimed that HMS conducts an “innocent passage through Ukrainian territorial waters in accordance with the international law” and rejected Russian Defense Ministry’s claims that warning shots were fired or bombs were dropped in the destroyer’s path.

“The Royal Navy ship is conducting innocent passage through Ukrainian territorial waters in accordance with international law,” the Defense Ministry press service said in its Twitter Wednesday, referring to the internationally recognized right to sail through territorial waters of a country provided they mean no harm. “We believe the Russians were undertaking a gunnery exercise in the Black Sea and provided the maritime community with prior-warning of their activity. No shots were directed at HMS Defender and we do not recognize the claim that bombs were dropped in her path.”

The Defense Ministry also claimed that the destroyer was traveling in an “internationally recognized traffic separation corridor.”

That is non-denial denial. Warning shots are never directed AT the target.

A BBC journalist on board of the British ship does not think that it was just an ‘innocent passage’:

The crew were already at action stations as they approached the southern tip of Russian occupied Crimea.

Weapons systems on board the Royal Navy destroyer had already been loaded.

This would be a deliberate move to make a point to Russia. HMS Defender was going to sail within the 12 mile (19km) limit of Crimea’s territorial waters. The captain insisted he was only seeking safe passage thorough an internationally recognised shipping lane.

Two Russian coastguard ships that were shadowing the Royal Navy warship, tried to force it to alter course. At one stage one of the Russian vessels closed in to about 100m (328ft).

Increasingly hostile warnings were issued over the radio – including one that said “if you don’t change course I’ll fire”. We did hear some firing in the distance but they were believed to be well out of range.

As HMS Defender sailed through the shipping lane it was buzzed by Russian jets. The Captain, Vincent Owen, said the ship detected more than 20 military aircraft nearby. Commander Owen said his mission was confident but non-confrontational.

The BBC reporter phoned his report in. One can hear Russian jets buzzing the ship. 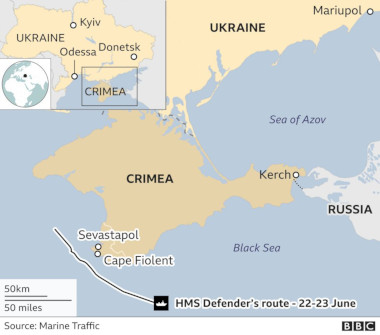 Innocent passage with loaded weapons? That is a no no. Passing a battle ready warship through Russian territorial water without necessity? There are no ‘shipping lanes’ in that area but lots of room to the west to pass around Crimea.

So no. The Brits were clearly seeking a confrontation. There was also a U.S. spy plane flying in the area to record the Russian reaction. 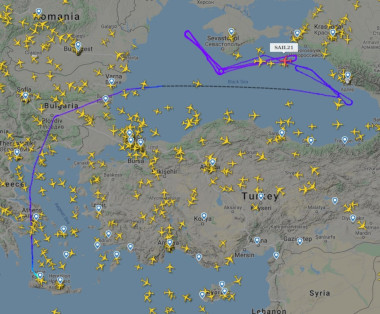 This came just hours after the U.K had signed an agreement with the Ukraine for the “enhancement of Ukrainian naval capabilities”:

Contractual work will now begin to implement the following projects:

The editor of the Chinese Global Times says that Britain should receive a “slap-like lesson” for today’s incident. That is probably a good idea. But Russia tends to not react hasty over such issues. Revenge is best served cold.

Unrelated to the above a slap-like lesson was given to Britain today when U.S. Secretary of State Tony Blinken arrived in Germany:

“I think it’s fair to say that the United States has no better partner, no better friend in the world than Germany,” Blinken said. He is scheduled to meet with Chancellor Angela Merkel and Foreign Minister Heiko Maas.

Next week NATO will run its Exercise Seabreeze in and near to the Black Sea in which soldiers and sailors from some 30 nations will take part. In light of today’s provocation the Russian military will probably prepare some surprises for them.

One thought on “These Uppity Brits Need A Slap-like Lesson”