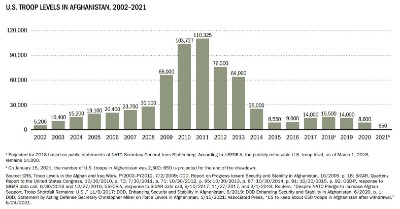 Washington, D.C., August 19, 2021 – The U.S. government under four presidents misled the American people for nearly two decades about progress in Afghanistan, while hiding the inconvenient facts about ongoing failures inside confidential channels, according to declassified documents published today by the National Security Archive.

The documents include highest-level “snowflake” memos written by then Secretary of Defense Donald Rumsfeld during the George W. Bush administration, critical cables written by U.S. ambassadors back to Washington under both Bush and Barack Obama, the deeply flawed Pentagon strategy document behind Obama’s “surge” in 2009, and multiple “lessons learned” findings by the Special Inspector General for Afghanistan Reconstruction (SIGAR) – lessons that were never learned.

The recent SIGAR report to Congress, from July 31, 2021, just as multiple provincial centers were falling to the Taliban, quotes repeated assurances from top U.S. generals (David Petraeus in 2011, John Campbell in 2015, John Nicholson in 2017, and Pentagon press secretary John Kirby in 2021) about the “increasingly capable” Afghan security forces.  The SIGAR ends that section with the warning: “More than $88 billion has been appropriated to support Afghanistan’s security sector.  The question of whether that money was well spent will ultimately be answered by the outcome of the fighting on the ground, perhaps the purest M&E [monitoring and evaluation] exercise.”  Results are now in with the total collapse of the Afghan government and a looming humanitarian crisis.

The documents detail ongoing problems that bedeviled the American war in Afghanistan from the beginning:  lack of “visibility into who the bad guys are;” Pakistan’s double game of taking U.S. aid while providing a sanctuary to the Taliban; “mission creep” as a counterterror effort against al-Qaeda morphed into a nation-building war against the Taliban; Washington’s attention deficit disorder as the Bush administration pivoted to invading and occupying Iraq; endemic corruption driven in large part by American billions and secret intelligence payments to warlords; fake statistics and gassy metrics not only by the military but also the State Department, US AID, and their many contractors; the mismatch between Afghan realities and American designs for a new centralized government and modernized army; and more.