The hard work of press freedom activists is paying off! Mainstream outlets are increasingly speaking out against the prosecution of Julian Assange, with The New York Times editorial board the latest to join in. 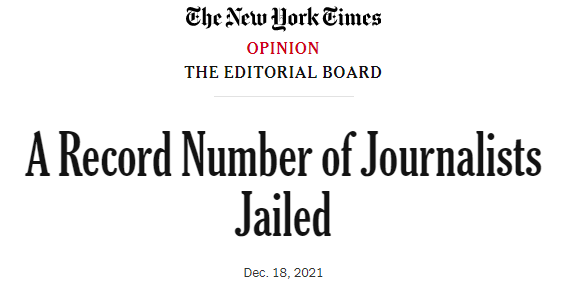 The Times blasted the Biden administration for striking “at the very foundations of a free press” by prosecuting Julian:

“It is most unfortunate that the U.S. government has chosen to continue to use a law as potent as the Espionage Act to pursue Mr. Assange. There is a debate about whether Mr. Assange is a journalist, but equating the publication of classified materials received from government sources with espionage strikes at the very foundations of a free press and should be rejected by Mr. Biden.” – The New York Times Editorial Board (December 18, 2021)

Our live blog has an update today on the Times editorial and big letters in the Times and Chicago Tribune by Assange supporters. In other news, here’s a recap of some of the great work activists did last week:

We’re moving the needle, with your help!

But the progress is slow and hard-fought. Even the Times, in condemning the Biden administration and calling for an end to Julian’s persecution, repeats many of the usual smears and half-truths about the case.

How Can You Help #FreeAssange?

We almost never ask for financial support, but we could use your help to continue to educate the public and push our politicians. The New York Times shows that we are winning on the issues, but that powerful figures are reluctant to stand up for Julian. Your support can help us raise awareness about the attack on press freedom and build momentum to #FreeAssange.

You can also check out our events page to find ways to get involved on the ground. The Assange Defense blog can keep you up-to-date with news and analysis. You can also add your voice to our online campaigns on social media by sharing our petition on Facebook & Twitter.