In the second deepfake video of the series, Alexander Rodchenko explains why the line is the basis of his creative concept and defines principles of construction. 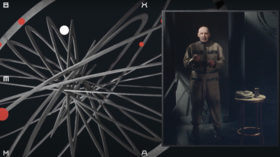 Rodchenko.LIVE is a series of deepfake videos in which the artist talks about the legacy of the visionary Russian art and design school Vkhutemas (the Higher Art and Technical Studios) – the Soviet counterpart of the German Bauhaus. Rodchenko taught construction and metalwork at Vkhutemas, pioneering design ideas in Russia.

Vkhutemas was established shortly after the Russian revolution in 1917, after which the monarchy was abolished. It was conceived as an institution that would prepare artists and craftsmen with the aim of fulfilling the state’s goals for efficiency and production. But its legacy was short-lived – in 1930 it was closed permanently and its professors purged.

“We will not draw classic pots, we will not work in a realistic manner. I want you to radically restructure your perception, abandon your usual vision of the world,” deepfake Rodchenko tells his viewers in the second episode of Rodchenko.LIVE called “Line.Construction”.

The episode focuses on the conception of painting denoted by “Linearism” – a term coined by Rodchenko in 1919, when he introduced and proclaimed the line as an element of construction and as an independent form in painting.

Rodchenko.LIVE consists of four videos being released in 2021-2022.

In the first episode, ‘Experiments for Future’, Rodchenko gave an introductory talk about his life and the creation of a new type of craftsman at Vkhutemas. 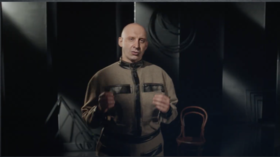 The project was developed together with RT’s creative development department, director Alexander Scryabin and Phygitalism – a company-developer of visual solutions based on artificial intelligence, augmented and virtual reality.

The video series is part of a larger project called Vkhutemas.academy, which aims to revive the legacy of the visionary art school using contemporary media formats. The website will be available in English soon.