The choice of the Anglo-Saxons to ignore the Russian proposal for a treaty guaranteeing peace and to substitute it with the fantasy of a Ukrainian crisis is not bearing fruit. France is agitated, Germany is paralyzed, but Hungary is likely to lead its neighbors to a position identical to that of Russia: the defense of international law. 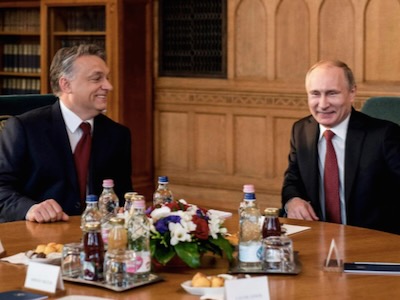 After Nato and the United States leaked their responses to the Russian proposal for a treaty guaranteeing peace, the United Kingdom denounced the Russian army’s attack on Ukraine on Wednesday, February 16 (time not specified). Many Atlantic Alliance member states are sending troops and weapons to Ukraine and surrounding areas, while other Alliance members are sending their leaders to meet with Russian authorities in Moscow. 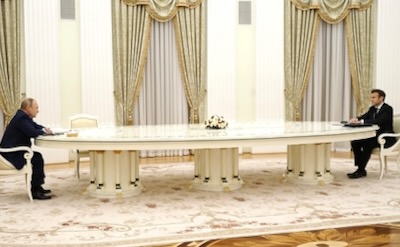 The most important trip was that of the French president and president of the European Council, Emmanuel Macron. He went to the Kremlin with the idea of calming the game and avoiding an unnecessary war over Ukraine. His trip was in line with that of his predecessor, Nicolas Sarkozy, during the war in Georgia: to do nothing, but to give the impression of stopping the wild Russian bear when it was already satisfied.

President Vladimir Putin had no intention of negotiating anything with him, as the proposed treaty only concerns the United States. However, since the little Frenchman had come to discuss subjects that he did not know, the master of the Kremlin, who has been dealing with them for 24 years, was happy to explain them to him. He did not expect any reaction, merely showing him the discomfort of his position: President Macron could not betray his NATO overlord and suddenly defend the French interests that he has constantly neglected.

The meeting lasted five hours, proof of the importance that Russia attaches to France. Obviously, nothing came out of it, except, during the final press conference, the reminder that Russia is a nuclear power. In any case, President Macron hoped to announce that he had saved the peace. On his return to Paris, he declared that an agreement had been reached and that Russia would not invade Ukraine, which the Kremlin had been proclaiming for weeks. Unluckily, the Kremlin spokesman, Dimtry Preskov, immediately replied that the two presidents had not negotiated anything and therefore had not concluded anything.

Since France had no other means of action than negotiations for the stabilization of Ukraine, it followed up with meetings in the “Normandy format” (Ukraine, Russia, France, Germany). The outcome was known in advance: the Minsk agreements between the Kiev government and the separatists of the two oblasts of Donetsk and Lugansk are still not implemented because Kiev, which signed them, rejects them. In any case, Kiev does not want to enact a special status for its Russian-speaking population. In the meantime, the law goes so far as to prohibit teaching in Russian in a country that is half Russian-speaking.

Any government anywhere in the world would have accepted this legitimate demand. Kiev explains its refusal by recalling that it signed its agreements under pressure, but never wanted them. The separatists, on the other hand, point out that the Ukrainian army deployed in front of them includes the Azov battalion, brandishing Nazi symbols and commanded by the self-proclaimed “White Führer,” Colonel Andrey Biletsky. And these people, framed by the mercenaries of Erik Prince (the founder of Blackwater), are shouting that they will annihilate those Russkies they keep bombing. That’s why the separatists have declared their independence, which unfortunately nobody has recognized, not even the Russian Federation.

France would have asked Ukraine to put its army in order, but it is out of the question. Erik Prince is acting as a private contractor, but everyone knows that he is doing so on the instructions of the CIA, which has already used Andrey Biletsky and a few others to overthrow President Viktor Yanukovych in 2014. The situation has come full circle and is insolvent. 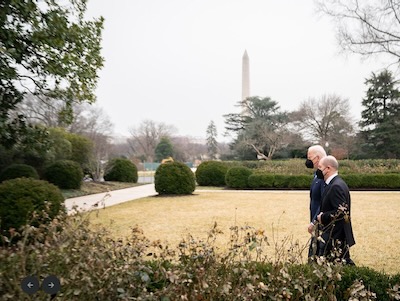 The German Chancellor, Olaf Scholtz, went to Washington. He does not believe in a probable war in Ukraine any more than the French do, but he fears that the United States will ban the Nord Stream 2 gas pipeline, under one pretext or another. However, this pipeline is essential for Germany’s economic development. It will not replace the gas pipeline through Ukraine, but it will help meet the growing demand for energy. Without it, the industry will not be able to produce as much.

The situation of his country is very difficult insofar as it hosts more than 40,000 U.S. troops in hyper-secure bases that benefit from extra-territoriality. Germany, which is officially no longer occupied, is not master of its own house. Moreover, the country has entrusted its defense to Nato and neglected its army. It does not even meet the obligations of the Atlantic Alliance in this respect. If it were to face the United States, it would only last a few hours.

To form his government, the socialist Olaf Scholtz had to ally himself with the Greens (Grünen), the most Atlanticist party in Europe since Joshka Fischer and the Yugoslav wars. He was forced to appoint Annalena Baerbock as foreign minister, an environmentalist who is against everything Russian, especially gas.

Chancellor Scholz is thus maintaining the equivocation. In the White House, he kept repeating that his country and the United States would always act together, but carefully avoided saying what they would do. The American political class now looks at him with suspicion. 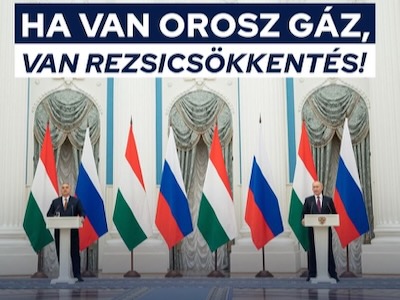 “Russian gas is a reduction in overhead!”
Facebook Victor Orbán

Hungary’s Prime Minister, the Christian Democrat Viktor Orbán, who was not long ago portrayed as a “fascist,” is pleased with his atypical position. He is the only leader of a European country and of NATO to have a long personal friendship with Vladimir Putin. The two men meet warmly at least once a year (except during the Covid epidemic).

Viktor Orbán started out in politics fighting for Hungary’s independence from the Soviets, but he has never been anti-Russian, which the United States does not understand. It is simple. By adopting the Brezhnev Doctrine, the USSR had forced the Warsaw Pact to become the equivalent of NATO: a suzerain and vassals. It is therefore for the same reason that he fought the Soviets and is now indignant about NATO’s behavior.

At the end of 2021, he negotiated with his friend Vladimir the energy supply of his country. First, Rosatom extended a nuclear power plant to meet all its electricity needs, and then purchased all the gas needed for 16 years at five times the market price at the time. In addition, he obtained the construction of a large railway line and the production of the vaccine (in the sense of Pasteur) anti-Covid Sputnik V.

Prime Minister Orbán has never vetoed the European Union’s anti-Russian sanctions. That would have been too much for his relations with Brussels and, in any case, unnecessary, as Moscow uses these sanctions to reorient its economy without having to take authoritarian measures. On the other hand, he was firmly opposed to Ukraine’s membership of NATO, which requires the agreement of each member state. On this point, he chose as an argument Kiev’s refusal to implement the Minsk Agreements and to recognize the Russian language.

In fact, it is he who could play the role of President Charles De Gaulle in 1966: to get his country out of the integrated command while remaining a signatory of the North Atlantic Treaty. In the shadows, his three partners in the Visegrád Group, Poland, the Czech Republic and Slovakia, are watching him.

Croatia under social democrat Zoran Milanović has already made it clear that it would not participate in a Nato war against Russia. Northern Macedonia of socialist Dimitar Kovačevski has given its support to Moscow. The Pentagon sees the danger: the unity of the Atlantic Alliance is shaken. It is already beginning to legally secure its bases in Europe. It has just signed a lease with extra-territoriality in Slovakia. It has also begun bilateral negotiations with Denmark to establish a non-NATO Defence Cooperation Agreement.

One thought on “Two interpretations of the Ukrainian affair”