In 2016, the United States committed to arming Ukraine to fight and win a war against Russia. Subsequently, the US Department of Defense organized a biological research program in Ukraine, and then huge amounts of nuclear fuel were secretly transferred to the country. These data change the interpretation of this war: it was not wanted and prepared by Moscow, but by Washington. 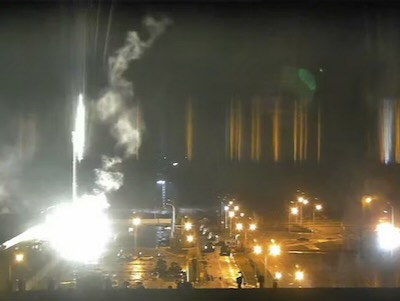 On March 4, 2022, during an attack by Ukrainian special forces on the Zaporizhia nuclear power plant, which the Russian army had been occupying for several days, a projectile set off a fire in an adjacent laboratory. At that moment, the world, unaware of what was at stake in the battle, believed that the fighters had gone mad and were taking the reckless risk of blowing up the plant.

Throughout this series of articles, which began a month and a half before the war in Ukraine, I have been developing the idea that the Straussians, the small group of Leo Strauss followers in the US administration, were planning a confrontation against Russia and China. However, in the tenth episode of this series, I related how the Azov regiment became the paramilitary pillar of the Ukrainian Banderists by referring to the visit of Senator John McCain to it in 2016 [1]. However, the latter is not a Straussian, but was advised by Robert Kagan during his presidential election campaign in 2008, a central thinker among the Straussians [2], even though he has always cautiously denied his membership in this sect.

The planning of the war against Russia

A video, filmed during John McCain’s visit to Ukraine in 2016, has resurfaced. It shows the senator accompanied by his colleague and friend, Senator Lindsey Graham, and Ukrainian President Petro Poroshenko. The two Americans are traveling on a Senate mission. But McCain is also the president of the IRI (International Republican Institute), the Republican branch of the NED (National Endowment for Democracy). It is known that the IRI has conducted about 100 seminars for the leaders of Ukrainian political parties classified as right-wing, including for the Banderists. The senators are addressing officers of the Azov regiment, the main Banderist paramilitary formation. This should come as no surprise. John McCain has always maintained that the United States should rely on the enemies of its enemies, whoever they may be. Thus, he has publicly claimed responsibility for his contacts with Daesh against the Syrian Arab Republic [3]

One thought on “The secret, US-financed Ukrainian military programs”