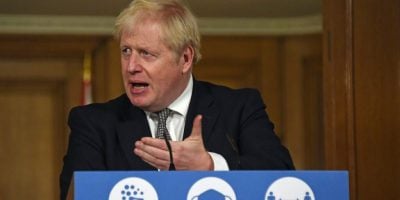 Like the political equivalent of a cockroach, UK Prime Minister Boris Johnson survived and endured one strike after another.  His credibility was shot, his mendacity second to none.  He lost the confidence of a party that delighted in his buffoonish performances and appeal.  Fearing electoral punishment, senior ministers and aides have left his side.  Labour opposition leader, Sir Keir Starmer, found himself making a witticism, calling this the first instance in history of the ship leaving the sinking rat.

No chronology on this would be sufficient.  But the recent turn of events has been something verging on spectacular.  There was partygate, which demonstrated the fullness of contempt shown by the Prime Minister and his staff to their constituents.  In April, he was fined for breaking his government’s own lockdown rules, having attended a gathering for his birthday in June 2020.  He also apologised for attending a “bring your own booze” party held in the Downing Street garden held during the first lockdown.  Despite showing some contrition, he believed, for the most part, that he had been following the rules and operating within them.

The occasion led to fines aplenty, though even the Police, at some point, drew a line underneath the sad and sorry saga.  Sue Gray, the senior civil servant tasked with investigating a series of social events held by political staff, came up with a grave conclusion.  “The senior leadership at the centre, both political and official, must bear responsibility for this culture.”

On June 16, the Tory leader survived a no-confidence vote from his own party, in which four out of ten parliamentarians voted against him.  Most PMs would have made a hasty exit.  Not Johnson, who seemed quixotically willing to make his last stand.

Then came the by-election losses in Tiverton and Honiton and Wakefield of June 23rd.  Instead of treating them as symptoms of a malady requiring treatment, Johnson simply put them down to the UK “facing pressures on the cost of living” and the fact that “in mid-term, governments post-war lose by-elections.”

The latest, and typically seedy entry in the scandals inventory, was the sexual harassment imbroglio involving Chris Pincher (“Pincher by name, Pincher by nature,” Johnson is said to have quipped).  As Conservative deputy-chief whip, he went to a private members’ club in London on June 29, got sozzled and was accused of groping two men.

A number of sexual assault allegations followed, some duly dusted for the occasion.  Despite a formal complaint being made against Pincher, Johnson denied knowledge of the “specific allegations”.  Not so, suggested former civil servant, Lord McDonald, seeing that he briefed the PM about it.  True to form, Johnson subsequently admitted he had been told in 2019, and regretted appointing Pincher to the party position in the first place.

Over the course of 48 hours, the Tory front bench was dramatically thinned of members.  Law makers and government officials left in an exodus of calculated and self-interested disaffection.  Stripped of support from across the most powerful figures in the party, the decision was made.

The resignation speech exuded reluctance, sounding more like a resume pitch for a return to the job.  It reflected the spectacular tone-deafness of his rule, with Johnson going so far as to lament those “Darwinian” rules that govern Westminster politics, driven by the hungry, remorseless “herd”.  The herd had moved and found their quarry.

Johnson extolled his government’s pandemic response on the vaccine front despite incompetence and bungling that led to the deaths of tens of thousands during the pre-vaccine phase.  Confused health directions on everything from mask wearing to whether Christmas might go ahead as usual, did not help.  When those responses firmed up in the form of strict lockdown rules, Johnson, his colleagues, and advisors flouted them with condescension and arrogance.

While being self-congratulatory on his own Brexit record, the report card is far from glowing.  Despite advertising the deal to electors as “oven ready”, the withdrawal agreement with the EU proved half-baked and raw at the core.

Even after reaching an accord with the EU, his government, last month, introduced plans to override parts of it, thereby threatening relations with the Union, the unity of the United Kingdom and the Irish peace process.  Only Johnson could term scrapping sections of the Protocol, which covers the way goods enter Northern Ireland from the rest of the UK, “a relatively trivial set of adjustments.”

There was little chance Johnson would leave Ukraine out of his resignation speech.  Detractors, and even some of those sympathetic to him, had noticed how willingly he seemed to extol the virtues of Ukraine as each crisis engulfed him.  He was the first leader of any major Western nation state to visit Kyiv, and also pledged a number of weapons, including the Javelin and NLAW missiles, and M270 precision-guided rocket launchers.

Another largely neglected legacy of the Johnson years should be noted.  Domestically, his conduct in centralising power during the course of Brexit and the COVID-19 pandemic at the expense of Parliament has emboldened the executive arm of government and damaged accountability.  In August 2019, he suspended, or prorogued Parliament for 5 weeks, just prior to the return of MPs from the summer recess.  The following month, the UK Supreme Court declared the prorogation unlawful.  “It is impossible for us to conclude, on the evidence which has been put before us, that there was any reason – let alone good reason – to advise Her Majesty to prorogue Parliament for five weeks”.

Through the course of his political career, Johnson never changed.  He had his supporters, his conspirators, his plotters.  He stayed true to his lies, abject opportunism and tabloid-styled villainy.  His administration proved rotten, but so were the various figures that gave him succour, including the indignant former advisor Dominic Cummings who now plays the role of stone-thrower in chief against his former boss.

Even now, some journalists and commentators detected throbbing notes of magnanimity and grace in his resignation speech, showing again how a profession that Johnson himself corrupted with such glee cannot be trusted to assess this legacy.

Dr. Binoy Kampmark was a Commonwealth Scholar at Selwyn College, Cambridge.  He currently lectures at RMIT University. He is a regular contributor to Global Research and Asia-Pacific Research. Email: bkampmark@gmail.com