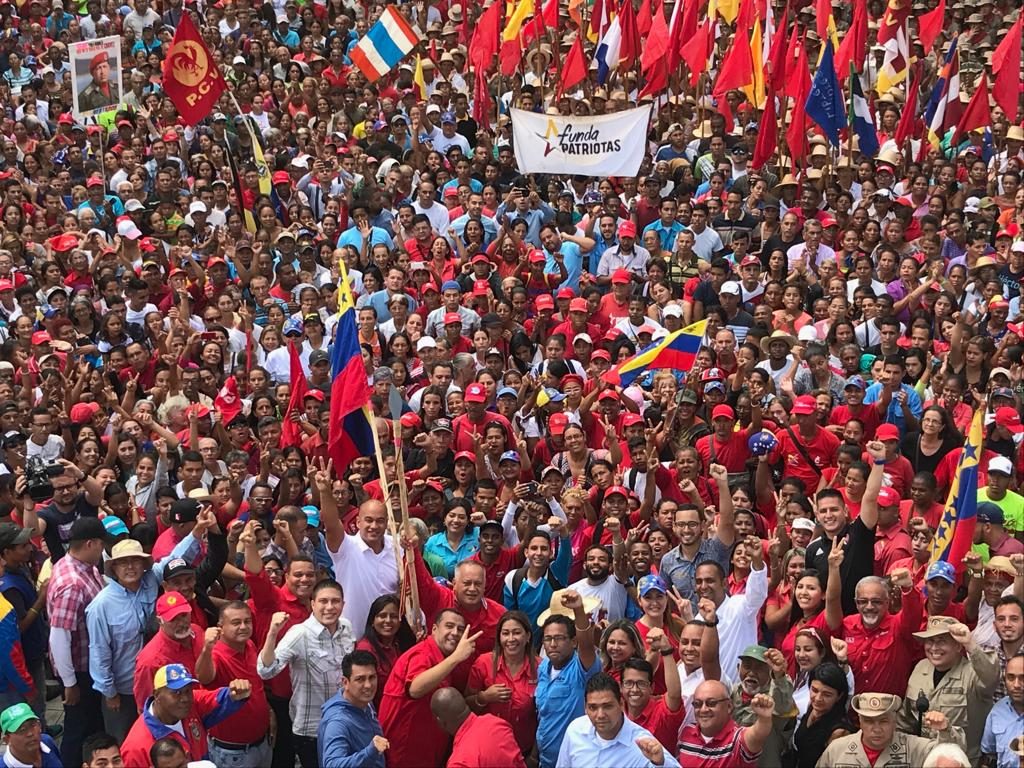 The imperialist intervention is Venezuela is increasingly facing resistance. Now, it is from Russia.

The Russian government has described the “humanitarian aid” offered by the U.S. as an attempt at military intervention in Venezuela.

Russian Foreign Minister Sergey Lavrov held a telephone call on Tuesday with U.S. Secretary of State Mike Pompeo. During the conversation over telephone, Lavrov warned Pompeo against any interference including military into Venezuela’s internal affairs. This information was given by the Russian Foreign Ministry in a statement following the phone call.

The Russian Foreign Minister urged his U.S. counterpart to cease threats by Washington on the use of force to promote a change of government in the South American country.

Earlier, Lavrov, in a press conference in Moscow, accused the U.S. of pretending to disguise a military intervention in Venezuela with the arrival of supposed humanitarian aid.

The Russian Deputy Minister of Foreign Affairs, Sergey Riabkov, said on Tuesday that Russia is interested in being part of the International Contact Group that seeks to find a political solution to the situation.

“We raised the issue before the organizers of a conference in Montevideo from the very start,” he said. “We are interested in Russia’s joining it at least as an observer,” the senior diplomat added.

The official assured that Russia received a report on how the contact process is going, but insisted on the interest by the Kremlin to participate in the process.

Iran opposes US coup in Venezuela

Iran’s Deputy Permanent Representative to the UN, Es’hagh Al Habib, said that the aim of the U.S. coup in Venezuela is to dominate the country’s oil resources.

He made the remarks Tuesday while addressing the Non-Aligned Movement (NAM) member states’ meeting on Venezuela, in the Trusteeship Council.

Iranian envoy highlighted that hostile, illegal and provocative policies of the U.S. should be stopped.

He went on to say current development in Venezuela is a domestic issue that does not threaten regional or international peace and security.

Al Habib emphasized that no foreign action can be taken without the explicit consent of the government and no one can instruct Venezuelans what to do or not do, which system to choose or what policies to adopt.

“Most importantly, no country or organization has the right to determine which of the national institutions of another country is democratic or legal. According to the Universal Declaration of Human Rights and the International Covenant on Civil and Political Rights, only the ‘will of the people’ will be the basis of legitimacy of the state.”

“It is an inherent right that shouldn’t be subject to a condition such as the recognition of a foreign country or organization and should be strongly respected by every UN member state,” he said, adding, “Hence, all the hostile policies of the United States and its illegal and provocative actions must be stopped.”

Arreaza slams indifference of UN members to US coup

The Venezuelan Foreign Minister Jorge Arreaza said that the government of Nicolas Maduro is willing to sit with the opposition for dialogue, regardless of place, day or time.

During a press conference at the UN Tuesday, Arreaza condemned the attempted coup against Venezuela and accused members of the international body of the indifference before such a scenario

“In Venezuela there is no humanitarian crisis; there is a blockaded and besieged economy […] Enough of so much lies; we came here to defend the truth of Venezuela,” said the diplomat after his meeting with the 120 members of the Movement of Not Aligned Nations (NAM). He accused the U.S. of leading a coup d’état directly and openly “for the first time in the history of Latin America.” He mentioned that once, the U.S. government had operated as sponsor but not as author in coup against other countries. .

“Anything can happen, but there is no reaction” by the U.N. said Arreaza, reading article 4 of the Charter of the international organization and recalling the principles of the organization’s deeds.

Arreaza also said that the government of Nicolas Maduro is willing to sit with the opposition for dialogue, regardless of place, day or time, reiterating that they constantly extend this invitation. “Let’s sit down with the mechanism of Montevideo, with the Caracas mechanism, whatever they want,” he said.

The Bolivarian politician called the opposition “Venezuelan brothers,” assuring that he hopes they will soon become independent from the U.S. and accused foreign forces in Colombia and the U.S., of having boycotted the dialogue between 2016 and 2017 between both parties, with the aim of harming the South American country.

He addressed the peoples of the world to thank them and ask them to continue supporting the government of Venezuela.

The Vice President for Planning of Venezuela, Ricardo Menendez indicated that the encirclement and financial sabotage by the U.S. has generated losses of 60 billion dollars.

In an interview for teleSUR, Menendez said that about 80 percent of Venezuelans reject any interventionist action against the South American nation

Menendez indicated that the figure is derived from the recent study conducted by the Venezuelan Planning Institute over a period of two years.

The official said that the results of the analysis contrasts with the story the opposition has tried to write over the so-called crisis in the country.

The results of the study show 92 percent of people responded negatively to a military invasion of Venezuela and 86.5 percent rejected the financial sanctions imposed unilaterally by the U.S.

Menendez said that the results of the study are a sample of how anti-imperialist thinking is intrinsic to the Venezuelan people.

For the past week, millions of Venezuelan citizens have also been lining up to sign on to an open letter that will be issued to U.S. citizens that ask for peace and non-intervention.

During the interview, he said that since 2015, the Venezuelan opposition has maintained the idea that Venezuela is in a humanitarian crisis and that such an argument has been used to validate a military invasion.

He warned that Venezuela is the victim of a psychological war and assured that the siege and economic sabotage against the Bolivarian country has caused it to lose more than US$60 billion in the last three years.

Part of the psychological war is based on misinformation and fake news about humanitarian aid and access roads into the country, which include assertions of instability along the border of Colombia, and the closing of access roads that have been restricted for years.

Nicolas Maduro, the President of Venezuela, urged citizens to “unite the national spirit, the national determination around peace.”

Maduro continues his call for peace, dialogue, and the defense of Venezuela’s sovereignty during Tuesday’s 205 Annual Youth Day celebrations.

Celebrating the nation’s 205 anniversary of the Battle of La Victoria, the president urged citizens to “unite the national spirit, the national determination around peace.”

Marches traveled from the Plaza Morelos to the Plaza Bolivar in Caracas in a frenzy of flags, posters, and chants, denouncing the attempted coup d’état promoted by the United States on Jan. 23.

“When the story is written in 200 years this generation will be remembered as a brilliant generation that defended the Homeland. I’m sure,” the president said.

As Canada joins efforts by the Venezuelan right-wing opposition, the United States, and right-wing governments in Latin America to oust democratically elected President Maduro, Canada’s Labour Congress, representing over three million Canadian workers, in a statement has called on the Trudeau government to promote dialogue instead of intervention and a military coup.

“The CLC is alarmed at the escalation of international interference in the democratic process of a sovereign nation, including the possibility of military intervention,” the press release by the massive worker organization warned. “The CLC vehemently rejects a militarized solution to this crisis; the people of Latin America have not forgotten the brutal history of military rule in the region.”

The statement went on to urge the Canadian government not to promote or support regime change policy that is being sought by the government of the United States and its allies adding, “Canada’s role on the world stage is better suited to promote stability through constructive dialogue with the international community.”

One thought on “Imperialist Intervention in Venezuela: UPDATE 8”