VA’s Ricardo Vaz visited the San Agustin barrio of Caracas and reports on the community’s efforts to organise to fight back against the economic crisis.

In recent weeks, the mainstream media has bombarded us with selective images of Venezuela, with Venezuelans portrayed either as passively suffering from the devastating crisis or desperately wanting to be rid of the elected government of Nicolas Maduro. When Chavistas are depicted they are presented as fanatical red-clad drones mindlessly following a “socialist dictator.”

Absent from this coverage are the efforts from organised poor communities to confront the economic crisis and defend against what they perceive as an imperial attack against their country. In San Agustín, a popular barrio in central Caracas, the Unidos San Agustín Convive (San Agustin Coexists United) cooperative and the organised community remain steadfast in their struggle to organise and improve the community’s living conditions.

One of the ways in which the community fights back is by coordinating directly with organised campesinos from the rural Trujillo State. In 2016, the cooperative joined the “Pueblo a Pueblo” initiative in order to hold so-called “organised consumption events” every two weeks. These events allow the community to bypass intermediary retailers in the distribution chain and access fruit and vegetables directly at fair prices.

This entire process relies on horizontal assemblies, transparent accountability and a tremendous collective spirit from both urban and rural communities. In spite of the crisis, the consumption events continue distributing around 100 bags of food, rotating every two weeks between three different locations in the barrio: Terrazas del Alba, Hornos de Cal and El Manguito. The possibility of extending the experiment to new areas is currently being discussed.

The cooperative has also recently managed to secure its own truck, which every two weeks makes the over five-hour trip to Barquisimeto City, where the “Pueblo a Pueblo” storage centre is located. This truck unloads the agreed-upon produce for the consumption event in San Agustín before heading to La Guaira, Vargas State, where the rest of the produce is distributed. This way other communities are also granted access to these products at affordable prices.

Moreover, the cooperative has managed to move forward in other activities which look to improve their productive capacity and counter the harshest effects of the economic crisis in the community.

There is a small textile unit that produces children’s underwear, and another group has started producing table sauces using some of the ingredients sold at the consumption events. The priority is to supply the campesinos of Pueblo a Pueblo with products manufactured in the city, again at fair prices. Steps have also been taken in the construction of a farmhouse, with egg-laying hens and a few pigs expected in the near future.

The food distribution event last Saturday had a few differences compared to the one witnessed a few months ago. For starters, there is an unfolding coup attempt in the country and the looming threat of US military intervention. “The gringos won’t step in because they’re afraid of us,” one resident of the barrio told us. Signatures were also being collected for the “Hands Off Venezuela” declaration that has been signed by millions of Venezuelans in recent days, rejecting imperialist threats and meddling.

Other things, however, remain the same, starting with the voluntary work, the hospitality towards those that come for the first (or second) time and the collective spirit that permeates everything. The produce still entails savings for residents of around 70 percent when compared to commercial market prices. Sometimes flat prices per kilo for all products can imply that one or two products will be more expensive than in the markets of Caracas, but the massive savings on other goods more than compensate for it.

The main new feature was the content of the food bags distributed. While the default operation of the consumption event still involves an equal division of everything that arrives (i.e. if there are 200 kilos of potatoes and 100 people registered, the potatoes are split into 2 kilo piles), people no longer take the maximum amount of each product. The reason is that, despite significant savings across the board, under current circumstances buying 10 kilos of vegetables at once is not something everyone in the barrio can afford.

Much like this experiment was born as a response to the economic crisis, the crisis itself has imposed new challenges. Martha Lía Grajales, member of Unidos San Agustín Convive, explained that “when we saw that ordinary people, the poorest ones, could not afford the bags, it was a sign that something was not working.”

As such, the collective has decided to flexibilise the process, allowing people to buy smaller quantities while retaining access to the fruits and vegetables. When weighing the bags before paying there was a price list, but only for rounded kilos so as to make things easier. In other words, if a bag weighed 7,5 kilos, the person had to decide whether to add or remove something in order to get to 8 or 7 kilos, respectively, and in the majority of cases people would take out a few potatoes or carrots to climb down. In the end the leftover vegetables are also sold, with priority given to members of the cooperative. 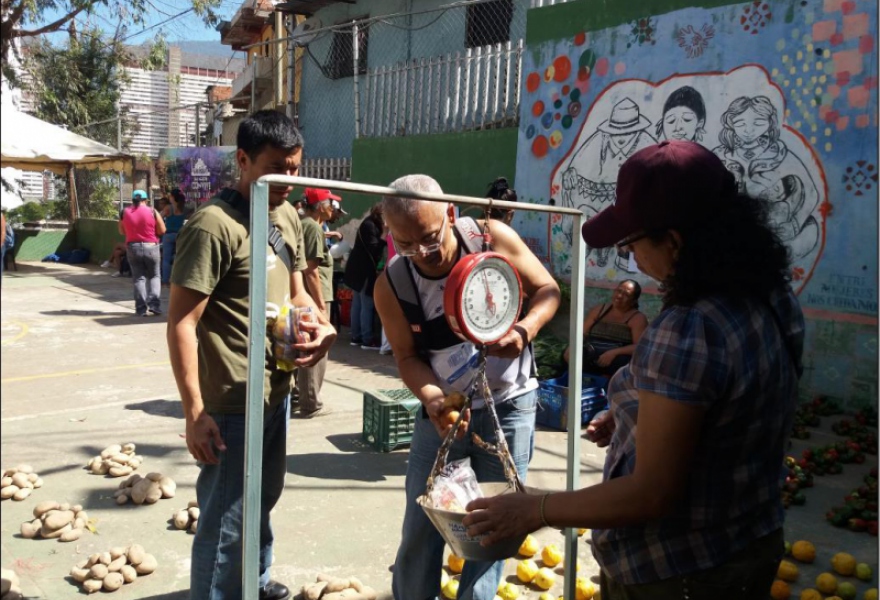 All the work in the food distribution event is voluntary. (Ricardo Vaz)

“Socialism is the only way”

Martha Lía Grajales insisted that “socialism is the only way” forward during an impromptu assembly that briefly gathered everyone from their tasks.

In the current context, popular movements cannot afford to explain that socialism is the historic horizon using only discourse. With day to day life affected to such a degree, it is necessary to demonstrate that the collective construction of popular power can address some of the people’s more immediate needs. Socialism needs to be explained in practice, with solidarity and grassroots democracy, to offer a glimpse into the future.

The barrios of Caracas have been battered by the economic crisis. Services like water, electricity or transportation are in ever worsening conditions, with an infrastructure that is suffering from a lack of maintenance and the difficulty to import replacement parts. To this we need to add that incomes are “devoured” by hyperinflation, as official economic policy seems to increasingly turn towards orthodox economic recipes to get it under control.

San Agustín and other Caracas barrios have seen protests in recent months focused on the deterioration of public services, which then became intertwined with scenes of violence in the days following the self-swearing in of “interim president” Juan Guaidó. Human rights collective Surgentes recently released a report about these episodes, stressing the violent nature of many protests, but also the disproportionate response from security forces, particularly the special forces branch of the National Bolivarian Police (FAES).

This dynamic was already in place before the imperialist aggression went into overdrive, amid US military threats and a de facto embargo against the oil sector that looks to asphyxiate the people in the shortest possible window so as to achieve the desired “regime change.”

This is a cocktail of elements that does not make for an optimistic reading of the near future. Nevertheless, there is a lingering defiance in San Agustín and the popular neighbourhoods of Caracas in general. It is a historical phenomenon which also has very much to do with Chávez’s legacy, which empowered the poor black and brown majority as political subjects. Unidos San Agustín Convive is but a microcosm, but there are hundreds of similar experiences throughout the country.

Beyond the drastic improvement in people’s living conditions, or the regional integration projects, the most lasting legacy of Chavismo might be this critical mass that has embraced socialism as the historical horizon. And no empire is a match for that.