(Joseph Thomas – NEO) – Washington and its allies across the Western World have been particularly eager in observing this year’s anniversary of their version of the 1989 Tiananmen protests.

It has become an opportunity to add political pressure atop economic pressure already being exerted on Beijing by Washington in its bid to encircle and contain China’s rise. 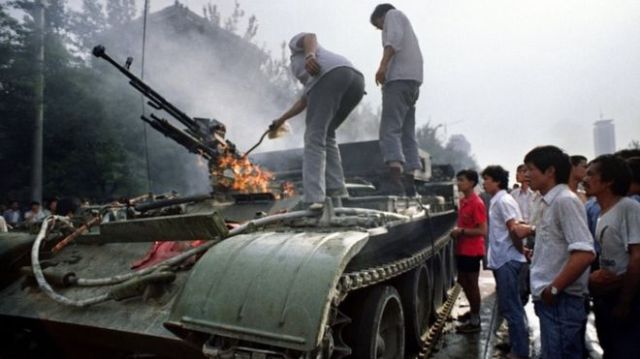 This pressure comes mainly through the Western media.

But the monopoly the US once enjoyed over the flow of global information is coming to an end. The more attention the US tries to draw to certain events, the more objective scrutiny others apply resulting in growing, irreversible damage to some of Washington’s most valuable propaganda narratives.

Attempts to characterise the Tiananmen protests as a violent crackdown on peaceful protesters is meant to portray China, then and now, as an violent authoritarian regime and a threat to not only freedom in China, but freedom worldwide.

But as this lie is exposed, the US itself appears to be the real risk to global peace and freedom.

The US State Department itself would set the tone of Washington’s annual propaganda drive. In a press statement titled, “On the 30th Anniversary of Tiananmen Square,” US Secretary of State Mike Pompeo would claim:

On June 4, we honor the heroic protest movement of the Chinese people that ended on June 4, 1989, when the Chinese Communist Party leadership sent tanks into Tiananmen Square to violently repress peaceful demonstrations calling for democracy, human rights, and an end to rampant corruption. The hundreds of thousands of protesters who gathered in Beijing and in other cities around China suffered grievously in pursuit of a better future for their country. The number of dead is still unknown.

Yet according to the US State Department’s own cables, thanks to Wikileaks, what Secretary Pompeo stated is categorically untrue.

In a 2011 Telegraph article titled, “Wikileaks: no bloodshed inside Tiananmen Square, cables claim,” it is admitted that:

Secret cables from the United States embassy in Beijing have shown there was no bloodshed inside Tiananmen Square when China put down student pro-democracy demonstrations 22 years ago.

While the Telegraph attempts to claim Chinese troops merely killed protesters they portray as peaceful and unarmed “outside” the square, evidence within the US State Department’s own cables proves precisely the opposite.

[Embassy officers] encountered a number of incidents in different locations in which crowds harassed military or police personnel, forced their vehicles to turn around, jeered at displays of captured military equipment, or vandalized captured military vehicles.

Further detailing the violence was an oblique admission in the New York Times in a recent article titled, “Witnessing China’s 1989 Protests, 1,000 Miles From Tiananmen Square,” in which now US Representative Andy Levin of Michigan gives his account of what he saw as a student during the protests.

The article admits (my emphasis):

Word spread quickly about what had happened. Rumor had it that protesters were being held in a particular police station, and a huge crowd massed outside it. The students weren’t there after all, but the crowd set fire to the police station.

Three fire trucks arrived, sirens blaring. The first instinct of the crowd was to move aside. But then, I could see the crowd change its mind. As in, “Wait a minute, we set this fire on purpose, so we don’t want this fire truck putting it out.” The crowd converged on a truck, chased off the firemen, flipped the truck on its side and set the truck itself on fire.

A forgotten Washington Post article from 1989 deceitfully titled, “Images Vilify Protesters,” attempts to dismiss evidence the article itself admits proves violence and atrocities were indeed carried out by protesters against soldiers who were displaying restraint.

The article admits (my emphasis):

The government’s case is bolstered by the fact that, in some areas, demonstrators did attack troops who did not respond, and these incidents were captured on videotape. On nightly television now, images are broadcast of protesters stoning troops, beating them with poles and, in some particularly dramatic photos, firebombing trucks, buses and even armored personnel carriers. In some cases, soldiers were still inside at the time. On one avenue in western Beijing, demonstrators torched an entire military convoy of more than 100 trucks and armored vehicles. Aerial pictures of the conflagration and columns of smoke have powerfully bolstered the government’s argument that the troops were victims, not executioners. Other scenes show soldiers’ corpses and demonstrators stripping automatic rifles off of unresisting soldiers.

If Chinese troops did kill “thousands” of protesters as many across the West claim, there is no evidence of it. This is why Secretary Pompeo himself admitted even this year, “the number of dead is still unknown.”

If Chinese troops fired into crowds at all, the US State Department itself, witnesses now holding political offices in the US government and prominent US newspapers all admit it was at mobs carrying out deadly violence against troops, police and rescue workers.

We don’t have to imagine what the US government itself would do if mobs attacked military personnel, burned down police stations then attacked responding rescue workers before destroying their equipment in a large US city. During the 1992 Los Angeles riots, thousands of US Army soldiers and Marines were deployed and authorised to use deadly force.

We could, however, try to imagine how absurd it would be if Beijing and media concerns it controlled tried to portray the LA riots as peaceful protests which the US “cracked down” on with disproportionate force. Only the West’s enduring monopoly over global news and information affords its the ability to portray Tiananmen Square in such absurd terms, despite evidence disclosed by the US government and media itself proving precisely the opposite.

Across Asia, the US is determined to drive a wedge between Beijing and the many nations in the region eager to build ties and do business with it. By promoting Washington’s Tiananmen narrative across the region, the US hopes to turn local opinions against Beijing.

The US has invested tens of millions of dollars a year in building up fronts posing as nongovernmental organisations (NGOs) or “student activists” to oppose regional governments doing business with China and to sour ties between regional nations and Beijing itself.

A perfect example of this is Thai “student activist” Netiwit Chotiphatphaisal.

He opposes a 2014 coup and the resulting government which ousted the US-backed client regime of billionaire fugitive Thaksin Shinawatra and his sister Yingluck Shinawatra.

The current Thai government has since cemented significant ties with Beijing through arms deals, military cooperation and the beginning of major infrastructure projects including a high-speed rail network.

Netiwit’s opposition to the government is tenuously hidden behind “democracy promotion” and “human rights.” His ties to and cooperation with US-funded NGOs along with his regular visits to Western embassies in Bangkok expose him instead as a lobbyist backed by some of the worst offenders of human rights on the planet today.

A 2017 Twitter post by pro-Western commentator Pravit Rojanaphruk showed himself posing (left) with Netiwit Chotiphatphaisal (right) inside the British Embassy enjoying wine together.

While not sipping on wine inside Western embassies or undermining the current Thai government, Netiwit annually protests in front of the Chinese embassy in Bangkok on the anniversary of the Tianaman protests.

An article by US government-funded media front Prachatai about this year’s anniversary protest titled, “Student group gathers in front of Chinese Embassy in memory of Tiananmen massacre,” claims:

The student group, calling themselves “Humanity Without Borders”, was led by Netiwit Chotiphatphaisal and Sirin Mungcharoen, both students at Chulalongkorn University. The group placed white flowers in front of a printout of a tank, and observed a moment’s silence in memory of the dead.

The article includes a picture with a large, professionally printed tank cut-out with a sign that reads, “a tank crushing those who think differently.”

Here, Netiwit and others not only repeat US lies regarding Tiananmen, they do so specifically to portray China, then and now, as a despotic regime that should be protested and resisted, not cooperated with, a notion that only Western embassies and the interests they represent could benefit from.

It might be relevant at this point to note that Netiwit has close ties with another US-backed “student activist,” Joshua Wong of Hong Kong, only further exposing the foreign-backed nature and motives of his activities, particularly in regards to China.

It should be noted that Netiwit was born in 1996. While he protests in front of the Chinese embassy in Bangkok annually promoting a dubious account of events that took place years before he was born, he has not been spotted protesting in front of the US or British embassies for illegal wars and atrocities both nations are carrying out today.

By reminding the world of Washington’s Tiananmen lies based on evidence the US government and media itself has documented, and exposing the truth behind cheap public stunts like those carried out by agitators like Netiwit Chotiphatphaisal, the West’s lies regarding Tiananmen will continue to fray each year.

Whole articles can be dedicated to emerging evidence that the US provoked the protests in 1989 to being with. It is admitted that the US CIA and British MI6 coordinated operations to rescue leaders from arrest after order was restored, the Financial Times would report. Many of those who led the mobs in 1989 are openly backed by the US government to engage in anti-government activities against Beijing today.

While the events of Tiananmen lay in the past, the US still to this day seeks to provoke similar violence against not only China, but nations all around the world in a strategy now so regularly used by Washington it has a name; colour revolutions.

By exposing the truth about past colour revolutions, we may be able to blunt or even prevent future ones from taking place, along with all the death and destruction that accompany them.

One thought on “Washington’s “Tiananmen” Lies Begin to Fray”