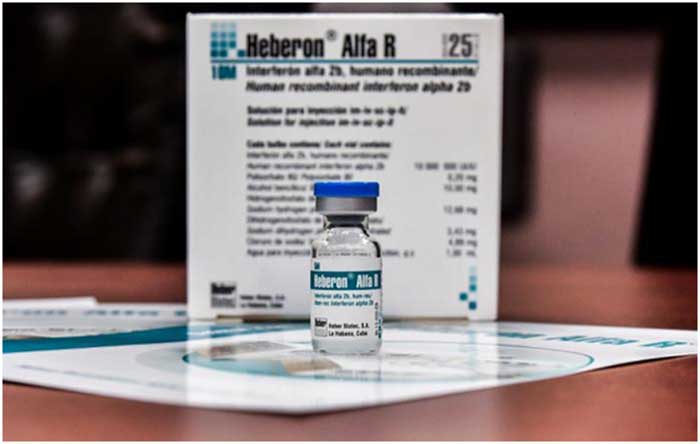 Although there is no preventive vaccine or specific treatment, at this time, for the new coronavirus SARS COV-2, which causes COVID-19, the Cuban pharmaceutical industry guarantees the production of proven, high efficacy medications, including recombinant human interferon alpha 2b, in addition to another group of drugs that are included in protocols for treating patients with this disease and the complications that may arise.

According to the president of Bio-CubaFarma, Dr. Eduardo Martínez Díaz, in this effort, the enterprise group has taken into account the experience of China, via a guide published by the country’s pharmaceutical association for the detection and treatment of the virus.

This guide, he noted, recommends interferon as the first choice medication, which we have the ability to supply to our public health system and internationally.

Cuba has been supplying interferon, produced with Cuban technology in the joint venture Changchun Heber Biological Technology facility, located in Jilin, China, and currently used for high-risk individuals and health care personnel, as a preventive measure, as well as i COVID-19 patients, via nebulization, the most rapid way to reach the lungs and have an impact in the early stages of infection, explained Marta Ayala Ávila, deputy director of the Center for Genetic Engineering and Biotechnology (CIGB).

At the same time, she said, we have been preparing for the use of interferon in Cuba, as we have capacity at the joint venture facility, but also within the country.

For his part, CIGB general director Eulogio Pimentel Vázquez reported that a supply of interferon is available to treat the estimated number of cases that could appear in Cuba over a period of three to six months. In addition, he said, “We have a total supply of the product in process that is practically equivalent to the amount needed to treat all those who were infected in China.”

Currently, this drug is included in protocols established by the Ministry of Public Health (Minsap) for the care of patients with the new coronavirus, and requests have been received from the Health Ministries of several countries. Pimentel said the center has the capacity, to respond not only to a possible increase in the country’s demand, but also to meet the 15 requests that have been received thus far from other nations, both for information and acquisition of the product.

Although recombinant human interferon alpha 2b has made headlines in the last few days in various international media given its efficacy in the treatment of patients infected with the new coronavirus, this is not the only medicine that Cuba has on hand to confront the global pandemic.

There are 21 other products included in Cuba’s protocol for treatment, among these are anti-virals, antiarrhythmicsand antibiotics, for the treatment of complications that may arise in patients with COVID-19, and the industry can guarantee their production, Martínez emphasized.

For example, AICA Laboratories manufactures 170 injectable medicines and sterile eye drops, and five of these are included in the basic protocol for patient care, stated the company’s general director, Antonio Vallín.

National availability has also been reviewed of intermediate materials and finished products, as well as the capacity to maintain production, while work continues on natural products to support the immune system and increase its response to any virus, he added.

Rita Maria García, BioCubaFarma’s director of Operations and Technology, reported that preparations for the current situation were begun well in advance and that the country’s health institutions have a stable supply of needed medications, although strategies to increase coverage are being implemented.

Drugs available include, for example, azithromycin in tablet and suspension form, injectable vancomycin, atenolol, methylprednisolone, diazepam, midazolam, paracetamol, ibuprofen, dipyrone, general anesthetics, as well as parenteral solutions needed for intensive care, such as dextrose, ringer and albumin, among others.

Regarding dipyrone, the BioCubaFarma president reported that 600 million tablets are required annually in the country and, although production capacity to ensure this amount does not exist today, coverage for hospital use is guaranteed.

We hope that the containment and epidemiological surveillance measures adopted by the Ministry of Public Health can have an impact limiting further infections in the country, he said, but BioCubaFarma is prepared to provide these 22 drugs for the treatment of thousands of potential patients.

Martínez Díaz acknowledged that 15% of medicines supplied by the industry are currently missing from pharmacies and that distribution cycles have been extended, as a result of difficulties in acquiring raw materials and the lack of spare parts for equipment used in the manufacturing process.

He noted that the U.S. blockade has a significant impact, as suppliers in that country have refused to sell Cuba equipment and supplies, citing the government’s financial persecution. Others do not want to sign new contracts, and those who have maintained commercial relations must face a number of obstacles.

In fact, we have significant financial resources that we are not able to deposit in the country because of the blockade’s restrictions on banks, he noted.

On the other hand, Biomodulin t is a drug s also considered an option to treat the new coronavirus. According to Mary Carmen Reyes, a specialist in immunology and head of clinical trials at the National Center for Biopreparations (BioCen), it is a modulator, included in Cuba’s basic inventory of medicines, used for recurring respiratory infections in older adults, to increase the patient’s defenses.

In the case of Covid-19, she said, data published in scientific journals points to how the virus affects infected patients immune response and decreases T-cells. This drug has the capacity to stimulate the production of such cells, she explained.

Given that elderly patients with weaker immune systems are prone to developing complications, the use of this drug is appropriate for both infected patients and those at risk, as well as health personnel.

The Cuban pharmaceutical industry is also emphasizing research and development, as a strategy to confront the pandemic, seeking new products that have the ability to inhibit reproduction of the virus.

According to Gerardo Enrique Guillén Nieto, director of Biomedical Research at the CIGB, two inhibitory peptides are currently being studied. One of these is CIGB 210, part of a project that has been under development for years as an antiviral to treat AIDS patients.

“Based on the evidence that exists in the literature, we are now experimenting with the effect of this peptide on a coronavirus of bovine origin, to evaluate its inhibition capacity. If it works, in collaboration with laboratories in China, we would analyze its effect against the new coronavirus.”

Another drug under consideration, coded as CIGB 300, is used to treat different types of cancer, including cervical and lung, and its antiviral capacity has been studied in patients with AIDS, Hepatitis C, and other viruses.

At the same time, a vaccine project is being designed, based on a platform of virus-like particles, with nasal immunization as a means of administration, a method used for the therapeutic vaccine against chronic Hepatitis B, developed at the CIGB. Data from this project has been made available to Chinese health authorities, to collaborate in its development, he concluded.

(The article was first published in Granma from Havana, Cuba)