The anti-China campaign, which the Deputy National Security Advisor Matthew Pottinger is running, presented its first of April joke. It leaked to Bloomberg that a secret U.S. Intelligence Report claims that China concealed the real numbers of its Covid-19 cases:

China has concealed the extent of the coronavirus outbreak in its country, under-reporting both total cases and deaths it’s suffered from the disease, the U.S. intelligence community concluded in a classified report to the White House, according to three U.S. officials.

While China eventually imposed a strict lockdown beyond those of less autocratic nations, there has been considerable skepticism of China’s reported numbers, both outside and within the country. The Chinese government has repeatedly revised its methodology for counting cases, for weeks excluding people without symptoms entirely, and only on Tuesday added more than 1,500 asymptomatic cases to its total.

Stacks of thousands of urns outside funeral homes in Hubei province have driven public doubt in Beijing’s reporting.

China did not conceal its number of Covid-19 cases. Nor did it hold back any information.

Reporting numbers during an outbreak of a new disease is actually very difficult.

When does one start to count? China only knew that it had a new virus epidemic in early January. By then those who died during the month before were already cremated. How could it count them?

Does one include co-morbids or not in the count? What about casualties of a car accident that also test positive for Covid-19 when they die? What about those who died with Covid-19 symptoms but could not be tested for lack of test kits? Are the tests really working reliable? At one point China included all pneumonia cases into the Covid-19 case count even after they tested negative for Covid-19. The Chinese epidemiologists thought that their test had been wrong and only later found out that that was not the case.

What about asymptomatic cases that test positive. Are these false positives or do these people really have the virus? One can only know that by testing them a month later for antibodies. If they developed antibody cells against the virus they must have had it. That may well be the reason why China only now added the 1.500 asymptomatic cases to its total count.

The most important number during an outbreak is the one that lets one plan for resources and model for countermeasures. That number is the Case Fatality Rate. 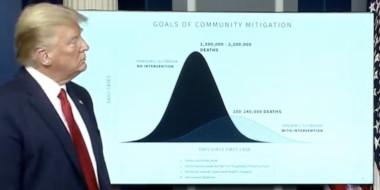 But that is the wrong number if one asks how likely one is to die of the disease:

You may have heard a term being used: the “case fatality rate”, or CFR. That is the number of deaths divided by the number of confirmed cases. When journalists talk about the “death rate”, that’s often what they are referring to. If a country has 10,000 confirmed cases and 100 deaths, then the CFR in that country is (100/10,000), or 1%.

Obviously, the IFR is much harder to determine accurately. The only people getting tested will be the people who are most ill, so your IFR is probably much lower than your CFR, because your denominator — the number you’re dividing by — is probably much bigger.

China, and everyone who followed its data, knew that the number of cases were different from the number of infections. But we did not know by how much. It was also clear that China was not counting all Covid-19 death. Italy shows how that problem arises:

As hospitals become overcrowded, patients are being asked to stay at home until they display the most serious symptoms. Many will die in their houses or nursing homes and may not even be counted as Covid-19 cases unless they’re tested post-mortem.

Last week, two researchers from northern Italy made this point forcefully when looking at Nembro, a small town near Bergamo that has been very severely hit by the outbreak. Writing in Italian newspaper Corriere della Sera they found there had been 158 deaths in the town in 2020 so far, as opposed to 35 on average in the previous five years. They noted that Nembro had only counted 31 deaths from Covid-19, which looks like an underestimate.

In other towns nearby, including Bergamo itself, the trend seemed identical. The researchers made the point that the only reliable indicator in the end will be “excess deaths” — namely, how many more people have died in total compared to a “normal” year.

Death per month in Bergamo over the last ten years* 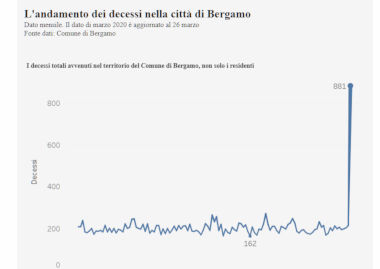 *The data refer to deaths until March 26th
bigger

The UK produces two different numbers. The Office for National Statistics says that it counts more Covid-19 death than the official GOV.UK site by the Department of Health and Social Care:

The definition who to count can change over time and not only in China:

[C]ountries may have good reasons to change the way they collect data as circumstances change, but it apparently happens often enough that the World Health Organisation feels that they have to

ask countries to notify them

when they do it. Famously, China did so earlier in the epidemic, but others do too: in complying with the WHO’s request, Australia has

As for the number of urns delivered to funeral homes in Hubei after the quarantine was lifted one has also to consider the number of regular death. Hubei province has some sixty million inhabitants. The regular mortality rate in China is 726 per 100.000 inhabitants per year. The regular expected number of death from January 1 to March 31 in Hubei province without the epidemic was 108.900. In Wuhan, which has 14 million inhabitants, the expected number was 25.410. Photos that show the delivery of a few thousands of urns to large funeral homes in Wuhan are thereby not a sign for a higher Covid-19 death rate. To claim such is propaganda nonsense.

There is no reason to criticize China for publishing incomplete and a times confusing numbers. That is normal during any epidemic and the U.S. will certainly do likewise. The real problem with the various numbers flowing around lies elsewhere.

People do try to make predictions about how many will get infected and die from the virus. These models are needed to prepare ones resources. But prediction is extremely difficult to do as the various models react very sensitive to the input data. A model that works in country A may give the wrong results when it used for country B. Cities and towns are different. Local circumstances can make huge differences. With the real infection numbers and the real death rate unknown during an outbreak we can only hope that our epidemiologists, who are trained to make and interpret such models, get it right.

To claim that China deceived the U.S. and the world about its numbers or that China tried to make it look as if the epidemic was not as serious as it is makes no sense at all.

China took extreme and drastic measures at high economic costs to prevent a larger outbreak. It did not do that to deceive anyone but because it saw the seriousness of the problem. It acted in the global interest and to defeat the virus.

China gave the world time to prepare for the pandemic. Unfortunately that time was not used well. One reason that the U.S. will now experience a very large outbreak is that it is not willing to follow the Chinese example. If one declares that gun shops and shooting ranges are critical businesses that must stay open during a lockdown one is not serious about fighting the epidemic.

To blame China for that is simply nonsensical.

The real number of casualties the SARS-CoV-19 outbreak will cause will only be known when it is over and when we compare the new death statistics to those of previous years. One thing is assured. The “excess death” numbers will be lower in those countries that did use the time China gave them and prepared for what was coming at them.