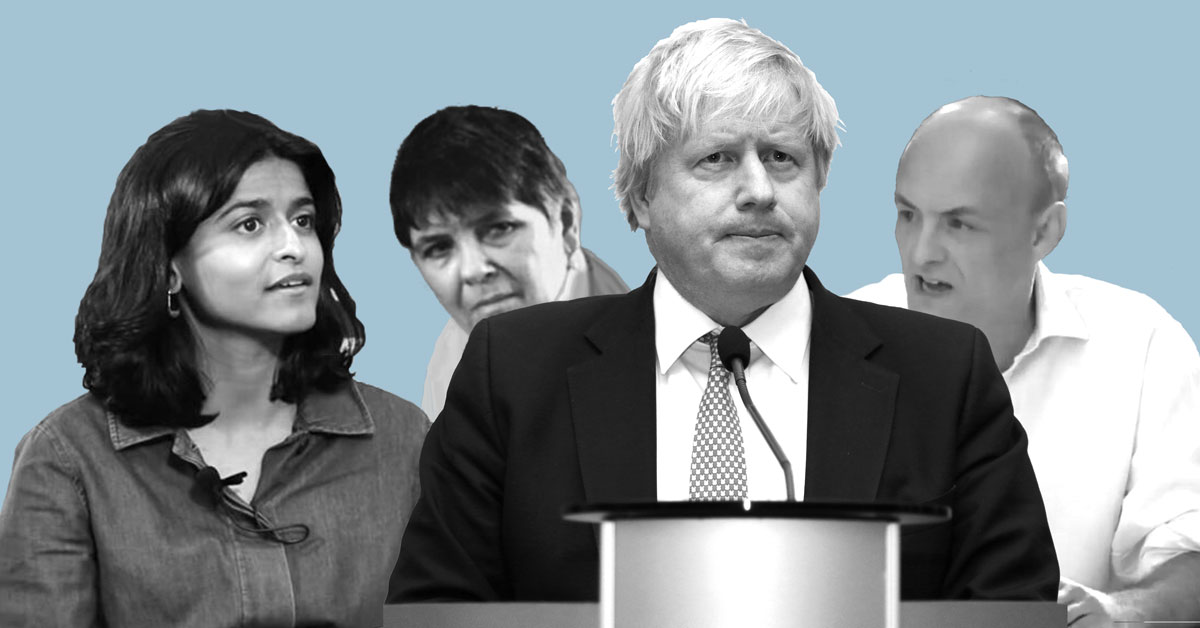 Were you surprised when one of the very first things Boris Johnson did on becoming Prime Minister was to declare his desire to “liberate” the UK “from anti-genetic modification rules”?

If it left you wondering, “Where did that come from?”, then you should pay careful attention to the wave of revulsion that has just greeted his handing of a peerage to Claire Fox, the sister of Fiona Fox, the director of the Science Media Centre. It could provide an explanation.

Fox’s ennoblement “offends me and many others deeply”, tweeted Colin Parry, father of one of the children murdered in the 1993 IRA bombing of Warrington – an atrocity that, as we previously reported, both the Fox sisters actively sought to defend. Warrington North MP Charlotte Nichols said, “Surely the Prime Minister must understand the hurt that giving her a seat in the House or Lords will cause to the families of those who lost their children in this heinous attack?”

And the sense of outrage extended well beyond Warrington. In The Times, David Aaronovitch complained that making someone who’d stood in solidarity with republican terror part of Britain’s legislature “sticks in the craw. It chokes us.”

Survivors of the Bosnian war also expressed their anger about the decision to make Fox, who published articles denying the Srebrenica massacre and similar war crimes, a Baroness. And so did London’s deputy mayor, Tom Copley, who tweeted, “With a few honourable exceptions this is the most appalling list of peerages I’ve ever seen. Packed full of cronies, and at least one genocide denier. Claire Fox has never apologised for denying the genocide of Bosnian Muslims.” 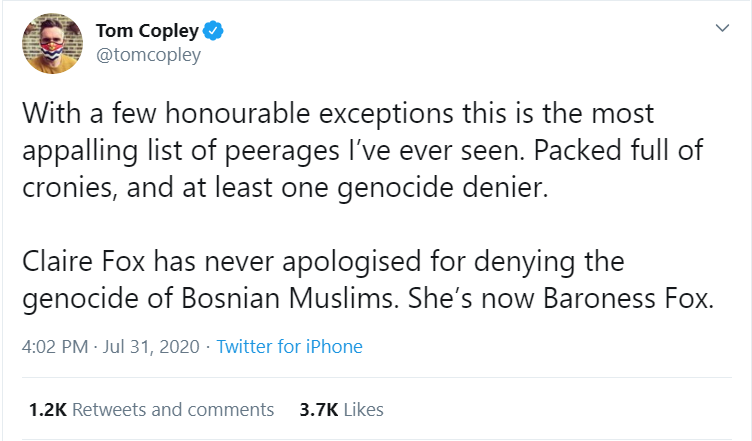 So why would Johnson go out of his way to honour someone so toxic? That question becomes even more puzzling when one considers other aspects of Fox’s record – like the ones featured in a series of tweets by the award-winning foreign correspondent and columnist Ian Birrell: “She ran a magazine that libelled ITV journalists by alleging they faked evidence when exposing some of the worst atrocities in Europe since WW2. It also opposed gun controls after the Dunblane massacre … Fox herself has defended Gary Glitter’s right to download pornography of abused children. She argues in support of climate deniers…”

The key to this puzzle may lie in the fact that Claire Fox and her sister Fiona, also a genocide denier and even more prominent than Claire in defending terrorism, are not lone mavericks. They are part of an ideological clique so tight-knit and on-message that a number of commentators – and some ex-members – have branded it a ‘cult’ or ‘sect’. And it is a sect that enjoys a remarkable degree of influence. So much so that Fox’s disturbing views cannot be dismissed as isolated fringe beliefs far removed from government and the levers of power.

As Ian Birrell notes: “Munira Mirza, another of her [Fox’s] follow travellers in this sect, is installed in Downing Street as one of the PM’s closest aides. Extraordinary that the modern Tory party wants to be associated in any way with pro-terrorism, pro-child abuse, pro-genocide views.” 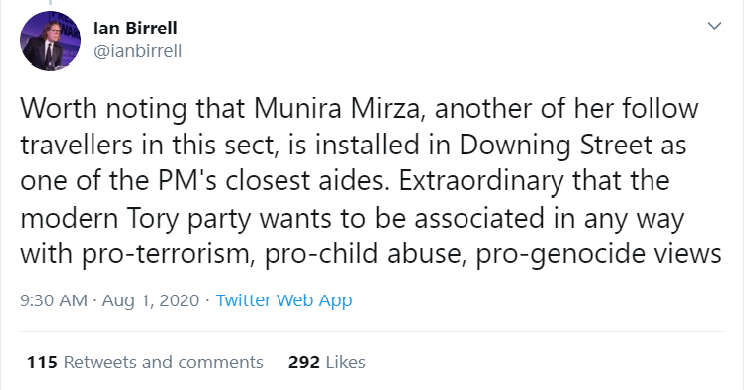 Part of the network

The sect is sometimes labelled “the RCP network” (or “LM network”), because like Claire and Fiona Fox, Munira Mirza is said to have been a member of the Revolutionary Communist Party prior to its dissolution in the late nineties. And like many of its members she was part of the network that emerged in lock-step out of the RCP and its magazine Living Marxism – later called LM. The extent of Mirza’s commitment is reflected in the 30 or so articles she has contributed to LM’s equally controversial successor, the Spiked website. And just in case anyone was in any doubt, Spiked’s editor openly acknowledges Mirza as a “friend of spiked”.

Spiked is known to have received substantial dark money funding from the Koch brothers. The support of rightwing billionaires for what was once a tiny Trotskyite splinter group becomes less perplexing once one realises that under the guidance of its founder and leader, the sociologist Frank Furedi, the RCP’s ideology evolved into an ultra-libertarianism opposed not just to controls on guns and child pornography but on science and technology, and corporations and capitalism. This is combined with an almost visceral loathing of environmentalists, who are seen as the enemies of progress because they encourage public concern and strict regulation.

These aspects of their ideology have long enabled the Furediites to attract corporate funding, collaborate with corporate front groups and right-wing think tanks, and more recently to align themselves with the Brexit Party – Claire Fox was one of their MEPs – as well as elements within the Conservative Party. And it’s the Furediites’ enthusiasm for a hard Brexit that has helped turn them into pillars of Boris Johnson’s Brexit establishment.

The extent of Munira Mirza’s political influence, in particular, is undeniable. Even though it was Brexit that took her into Downing Street, she was first hired by Johnson when he became Mayor of London in 2008. She then worked with him, starting as an advisor and going on to become deputy mayor for education and culture, throughout his 8 years as London Mayor. By 2018 she was even being tipped as a possible London Mayoral candidate herself.

As Andy Beckett notes in a recent Guardian article, Johnson doesn’t underplay Mirza’s influence on him, calling her “extraordinary”, “ruthless”, and one of “the five women who have shaped my life”. And it is not only Johnson’s life that she has helped to shape. Mirza co-authored the Conservatives’ 2019 election manifesto, which, according to Beckett, had “clear echoes of the RCP’s preoccupations and polemical style”.

It was to Cummings that Johnson’s unexpected proclamation of his intention to “liberate” GMOs – a desire he flagged up in each of his first three speeches after becoming PM – has generally been attributed. That’s understandable given Cummings’ well-known technophilia, his long-standing interest in eugenics, and his obsession with making the UK a leader in tech development. For Cummings this is a key advantage of getting the UK out of EU regulations: “Post-Brexit Britain will be outside this jurisdiction and able to make faster and better decisions about regulating technology like genomics, AI and robotics”.

But Johnson’s other main advisor is probably just as relevant to his espousal of GMOs and to the speed with which his government has set about trying to deregulate gene editing. Just as with Cummings, getting free of EU regulations over radical new technologies has been a key part of the RCP network’s enthusiasm for Brexit. In fact, they have been seeking to position themselves for years as advisors to the British government on how to bury the precautionary principle, beat back environmentalism, and deal with what they see as the public’s “irrational” fear of technologies like nuclear energy, human cloning and genetic engineering.

That’s why you can find members of their network like Fiona Fox directing the Science Media Centre since 2001, Tracey Brown directing Sense About Science since 2002, and Bill Durodié describing himself as an “Advisor to the Prime Minister’s Cabinet Office Strategy Unit study The Costs and Benefits of Genetically Modified (GM) Crops”, during the UK government’s last public debate on GM crops which culminated in 2003, to which Tracey Brown also contributed in an advisory capacity.

Back in 2003 Durodie, who lambasts the precautionary principle and public input into decision-making about technology, and Brown, who has shown herself perfectly willing to work with the tobacco industry, were able to gain input into the public debate in order to try to muddy its waters. But now with a public consultation on the deregulation of gene editing due to take place this autumn, we have Munira Mirza sitting at Boris Johnson’s right hand, perfectly placed to help set the terms of that consultation.

That hardly bodes well, given that Mirza belongs to an elitist “vanguard” that believes citizen involvement in this kind of decision making is positively undesirable, and which has a long history of manipulating debates. Meanwhile, Johnson’s other key advisor, Dominic Cummings, is also notorious for his ruthlessness in manipulating public discussion.

In 1999, as the GM debate raged in the UK, LM’s science correspondent lamented the fact that “so few” were standing up to public concerns over GM, given that “The GM debate is the terrain upon which society’s relationship to science and human endeavour is currently being worked out.” Two decades later, the few are still working to bypass the many – hoping to remove all safety checks and labelling through deregulation of gene editing, thus denying farmers and citizens meaningful seed and food choices while simultaneously removing focal points for further pushback against the unchecked power of the corporate and political elite.