A small portion of the leaks, released slowly by the Intercept Brasil and local media partners in 107 articles, revealed that Judge Sergio Moro illegally instructed prosecutors in cases he was ruling on; these leaks also exposed dozens of  secret, illegal meetings with agents of the US FBI. Lula’s defense lawyers have now released new, devastating information, in the context of a series of motions to dismiss.

In one conversation, Lava Jato taskforce chief Delton Dallagnol refers to Lula’s imprisonment as a gift from the CIA. The leaks also show that many coerced plea bargain testimonies were totally fabricated, including a frivolous case that resulted in the suicide of the dean of Santa Catarina Federal University, and that Dallagnol nicknamed them “outsourced testimonies.”

None of these revelations came as a surprise to Brazilians who have been reading legal blogs and the major independent media for the last five years. Many groups have been critical of Lava Jato from the moment Sergio Moro first froze operations at Brazil’s five largest construction companies in 2015. 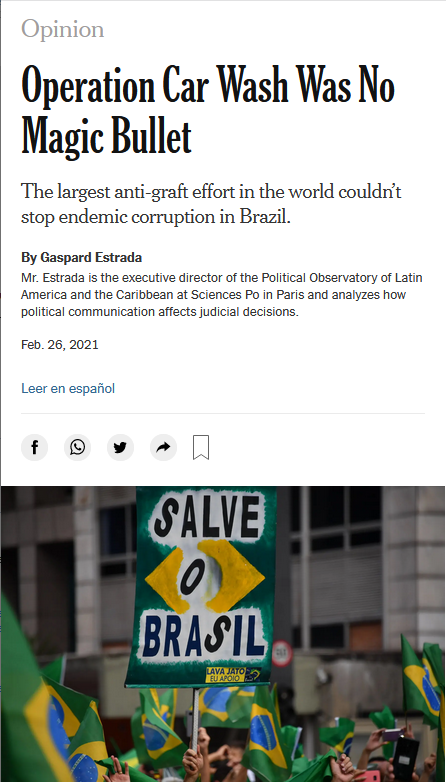 But the idea that ethical problems cut this deeply into Lava Jato may have come as a surprise to readers of a February 26, 2021, New York Times op-ed piece by Gaspard Estrada, headlined “Operation Car Wash Was No Magic Bullet,” which called it the “biggest judicial scandal in Brazilian history.” One paragraph of Estrada’s piece reads:

Although it has long been known that Mr. Moro convicted Mr. da Silva for indeterminate acts and on flimsy charges, we now know that Mr. Moro himself helped mount the accusation against Mr. da Silva, thus violating the Brazilian justice system’s legal principle of not being a judge and a prosecutor at the same time.

The paragraph contains three linked sources. Lava Jato prosecutors’ failure to clearly define any specific crime of corruption committed by Lula is linked to a rare, critical New York Times op-ed piece by the Center for Economic Policy and Research’s Mark Weisbrot (1/23/18). The references to Sergio Moro simultaneously serving as judge and prosecutor are linked to two articles in the Brazilian news medium UOL.

Estrada doesn’t link to a Times article here, because there does not appear to be one. In 37 relevant articles I found with the keyword search “Lava Jato” published by the Times between the outset of the scandal in 2015 and the first week after ex-President Lula’s illegitimate, political imprisonment, I found no mention of it. Apparently the fact that a judge was allowed to oversee an investigation against an ex-president, authorize wiretaps, rule on admissibility of evidence, then preside over the same investigation in a trial with no jury, did not seem relevant enough to be mentioned in dozens of generally sympathetic articles on Lava Jato.

The Times rarely applied any scrutiny to the investigation until Lula’s political imprisonment was imminent. Serious crimes committed by Moro and the taskforce, such as the 2016 wiretapping of Lula’s defense team’s law offices, were either glossed over or not mentioned at all. In article after article, the Times failed to share important information on the investigation. This helped normalize the 2016 coup and the removal of Lula from the 2018 presidential elections, which in turn opened the door for a neofascist/military takeover of Brazil.

Missing in Action: US role

The Foreign Corrupt Practices Act or FCPA, originally passed in 1977, is a federal law designed to prohibit overseas bribery by US companies. Twenty years later, it was linked to an international treaty, the OECD Anti-Bribery Convention of 1997, which enables the SEC and DoJ to act in any signatory nation in consort with local authorities. These partnerships enable US authorities to investigate any company that has a US bank account, owns real estate in the US, has stock traded in the US, or that has ever conducted any type of transaction in dollars. It was the FCPA, for example, that enabled FBI agents to raid FIFA headquarters in Zurich in 2015.

The fact that Brazil adheres to the Anti-Bribery Convention enabled the US DoJ to work as an equal partner—some critics argue it took the lead—in Lava Jato, levying billions of dollars in fines on Brazilian companies in civil cases, generally based in the Southern New York Court District.

Indeed, anyone interested could read about the US involvement in Lava Jato in legal blogs as early as 2015, in documents published by US Law firms and on the DOJ’s own website starting in 2016, as US Attorney General William Barr pointed out in his reply to a congressional inquiry led by Hank Johnson and 12 other members of Congress into, among other things, whether the US DoJ played a role in Lula’s arrest.

In 37 New York Times articles published on Lava Jato between 2015 and April 12, 2018, however, the US is only mentioned three times. The relationship to Lava Jato is left unclear in two, and the FCPA is mentioned once, in 2016, in the context of a then-record $3.5 billion in fines levied on Brazilian companies in New York.

President Richard Nixon in 1972 ordered the CIA to “make the economy scream” in Chile, in order to build popular support for a coup against socialist President Salvador Allende. Together with the ITT corporation, the CIA organized a world-wide boycott of Chile’s primary export commodity, copper, and the country’s economy tanked. 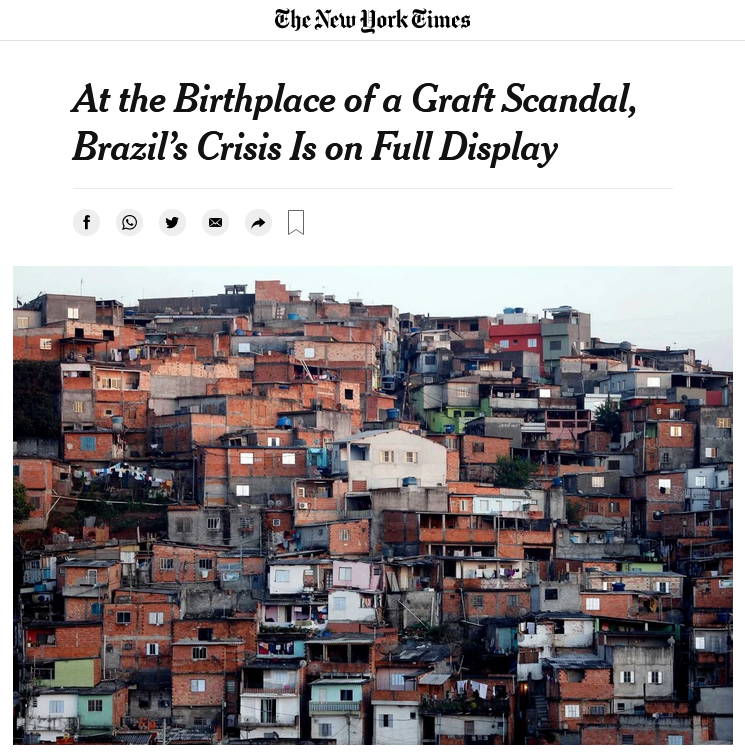 The New York Times (6/10/16) justified Lava Jato in terms of Brazilians’ falling standard of living—which Lava Jato did much to contribute to.

In 2015, Judge Moro ordered all contracts canceled for Brazil’s five largest civil construction companies, bankrupting four of them and causing 500,000 immediate layoffs. With another order, he paralyzed major operations of the Petrobras state petroleum company. Together, according to a study cited in BBC Brazil (12/2/15), these measures contributed 2.5 percentage points to Brazil’s 3.2% drop in GDP that year.

Until last year, Ms. Ribeiro and her husband, Gleiciano, 32, were newly inducted members of the Brazilian middle class. They bought their first car, took frequent vacations and did not think twice about dining out. All that changed after Mr. Ribeiro lost his construction job. Now the couple hesitate before buying meat, and they have postponed plans to have a second child.

The Ribeiros’ plight was presented as sad, but not connected to an investigation that refused to treat important companies as “too big to fail.” Instead, Moro deliberately bankrupted them and “made the economy scream” during the lead-up to the 2016 legislative coup against President Dilma Rousseff. By removing this context, the casual reader was left thinking, “Look how horrible corruption is; thank God someone is doing something about it.”

Shortly after the US-backed 1964 military coup, former Brazilian President Jucelino Kubitchek was accused of receiving illegal improvements on a luxury apartment in exchange for political favors after leaving office. After months of vicious media attacks, all charges were dropped. As in the triplex apartment case against Lula 50 years later, there was no proof he ever owned the place.

In the week before the 1989 presidential election between Fernando Collor de Mello and Lula, a prominent business executive was freed from kidnapping. The media spread a false story that electoral propaganda for Lula was found in the kidnappers’ apartment. Later, the São Paulo civil police presented the kidnappers to the press wearing Workers Party (PT) T-shirts. Days after Collor won the election, it came out that the kidnappers had no connection to the PT and had been tortured by police and forced to wear PT T-shirts for the press conference. A year later, São Paulo Governor Orestes Quercia admitted that the kidnapping story had been manipulated to help Collor win the presidential election. A 2009 academic study by communications professor Diana Paula de Souza cites media manipulation of the kidnapping story as the key factor in Collor’s victory. 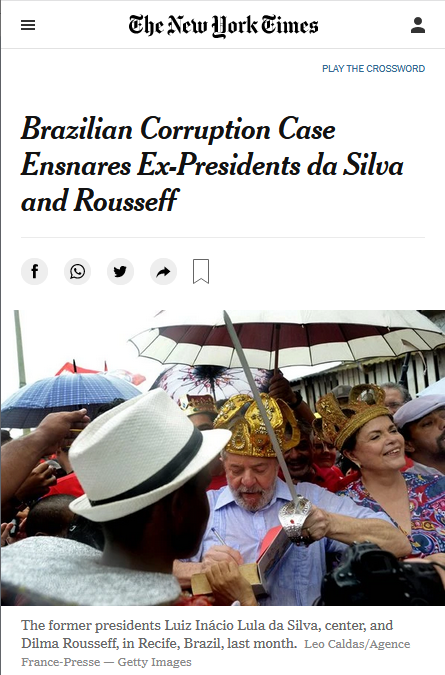 The New York Times (9/5/17) credulously reported the theory that former President Lula da Silva was the “center of a huge conspiracy.”

Anyone who knows Brazilian history understands that fake crime stories are regularly used to defame politicians. But instead of applying any scrutiny, the Times treated Lula as guilty before proven innocent. In article after article, frivolous charges waged by right-wing political enemies, which were dropped shortly afterwards, were repeated as truth. “Brazilian Corruption Case Ensnares Ex-Presidents da Silva and Rousseff,” (9/5/17), for example, amply quoted a US academic along with now-disgraced Brazilian Attorney General Rodrigo Janot in support of the outrageous charge (later dropped for lack of material evidence) that Lula and Dilma Rousseff were the heads of a $450 million criminal organization, while saving a few short platitudes of defense from Workers Party officials for the final paragraphs.

About the Lava Jato investigation, the New York Times could have asked: Why was a former president’s case allowed to be forum shopped to a court in Curitiba, Parana—a state that had no relationship with the alleged crimes, where Lula never resided? How could there be quid pro quo if the alleged gift to Lula took place years after he left political office? Why didn’t the deed to the triplex apartment attributed to Lula have his name on it? And why wasn’t the judge replaced after discovery that he ordered illegal wiretapping of the defense lawyer’s office?

Instead, the Times cherry-picked “Lula is innocent” clichés from Workers Party and defense lawyers press conferences, framing any criticism of Lava Jato as partisan. Due to the Telegram leaks, everyone now knows Lula is innocent, but long before this, there was ample evidence of a political witch hunt. By ignoring or downplaying issues that raised doubts about Lava Jato, while giving the hero’s treatment to Sergio Moro, the Times became an active participant in this witch hunt.

The New York Times is an extremely influential newspaper in Latin America. In 2004, when Times reporter Larry Rohter (5/9/04)  falsely accused President Lula of being incapacitated by alcoholism, it affected Brazil’s investment rating. Years of censorship by omission, one-sided reporting and lionizing far-right prosecutors as they worked closely with the FBI, helped to destroy the image of a political party that, among other things, moved 26 million people above the poverty line, was the world leader in greenhouse gas reduction, and implemented one of the most ambitious affirmative action programs in history.

As Joseph Joffe wrote in the New York Times Magazine (5/14/06), “Great soft power does not bend hearts; it twists minds in resentment and rage.” As someone who is witnessing the return of street children hawking cigarettes on public transportation, I bet I am not the only one down here with resentment and rage over the New York Times’ complicity in the biggest judicial scandal in Brazilian history.