The goal of this study is not to impress academics with complex statistics or seek favourable peer reviews, but to demonstrate to the ordinary decent citizen of Ireland, in the simplest possible terms, how the 2020 COVID-19 deaths claimed by NPHET every night on RTE1 and published on the data.gov.ie website cannot possibly be true. To that end I will present basic arithmetic and graphs as it is my belief that every Irish citizen should be fully informed of the fraud which has been carried out by the Irish Government, its agents and the media for the benefit of vested interests to terrorise the population into submitting to their draconian COVID measures by grossly overstating the deaths due to COVID-19 in 2020.

It is a legal requirement in Ireland that every death that takes place in the State must be recorded and registered. Records of deaths in Ireland are held in the General Register Office (GRO), which is the central civil repository for records relating to Births, Marriages and Deaths in Ireland. Deaths must be registered as soon as possible after the death and no later than 3 months.

The GRO estimate that approximately 80% of deaths are registered in this timeframe, however many deaths take longer than 3 months especially if a death is referred to the Coroner’s Service, such deaths include suicides, violent deaths and more recently all COVID-19 deaths, these deaths may not be registered for months or years after the occurrence. The GRO provide regular updates on the total deaths registered by the month they occurred in, but because of the lag in registrations they do not come close to being accurate until approximately six months after the month of occurrence. Generally, this lag would not cause a major problem as the death data is mainly used for medical research, however in natural disasters and health emergency situations such as the ongoing alleged COVID-19 pandemic, accurate and up-to-date death data is critical for planning and implementing measured responses to emerging situations. Without this current data on deaths, vested interests can use misinformation to understate or exaggerate deaths to pacify or terrorise the general population into certain actions or inactions, i.e., mass manipulation or hysteria.

During the early stages of the alleged COVID-19 pandemic in 2020 a number of publicly funded Irish academics began fearmongering through the media, including state sponsored media, that they estimated thousands of additional deaths would occur due to COVID-19. These deaths are called “excess” as they are above the normally expected deaths based on the previous 5-year average. These academics were estimating deaths compared to deaths notices published on the RIP.ie website.

Antidotally the evidence I was receiving from family, friends, work colleagues and my own observations in the major Dublin hospital where I work made me sceptical that the large numbers of COVID-19 deaths being reported were not actually excess deaths and were not above normal for previous flu seasons. In fact, January 2020 had a very low occurrence of flu cases. I began to look at the RIP.ie death notices and could not see how the academics could predict such high numbers of deaths. I contacted the academics and debated with them by email but they claimed the RIP.ie database they were using was privileged and would not share it with me, I was led to believe that they had obtained a proprietary database of the death notices from RIP.ie.

Later in November 2020 I became aware of an experiment being carried out by John Flanagan of the Central Statistics Office (CSO) also using RIP.ie death notices to estimate the total number of deaths occurring in recent months. The last CSO press statement on 2nd November 2020 regarding John’s experiment which ended in the September encouraged me to look closer at the possibility of obtaining more up-to-date figures on deaths using the RIP.ie death notices. I developed an automated system to obtain the data required from the death notices published on the RIP.ie website, plus, a method to remove or “clean” notices for deaths which occurred outside of Ireland and duplicate notices. I benchmarked my estimates against previous monthly GRO/CSO death data back to 2014 and found that it was as accurate as John Flanagan found during his experiment.

The comparison in tabular format between the death notes that I obtained from the RIP.ie website and cleaned to remove deaths which had occurred outside Ireland and duplicate notices, and the published GRO/CSO data from 2014 to 2021 is shown in Table 1 & 2 below. 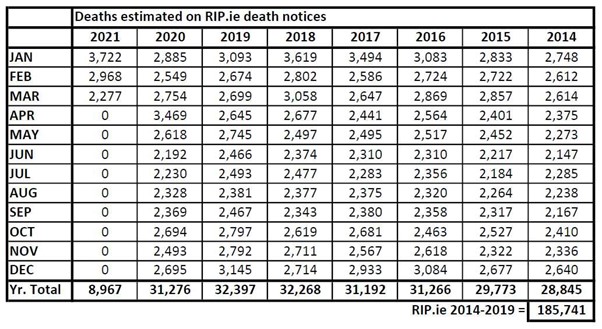 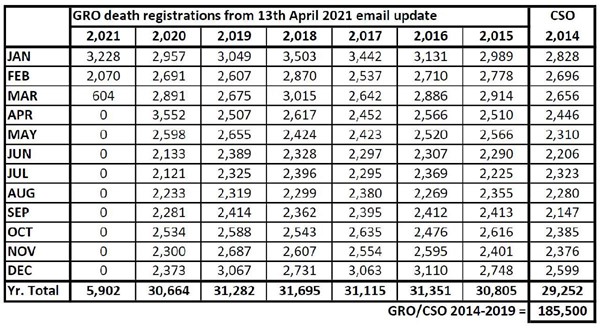 I then calculated the previous 5-year average for each month 2018-2012 from the data in Table 1 & Table 2, the excess deaths were calculated as the difference between the previous 5-year average for each month and the total for that month as shown in Table 3 below. The COVID-19 deaths claimed by NPHET and sourced from data.gove.ie is also included in Table 2 for each month from March 2020 to March 2020, there are no COVID-19 deaths provided for Jan and Feb 2020 and are assumed to be zero. 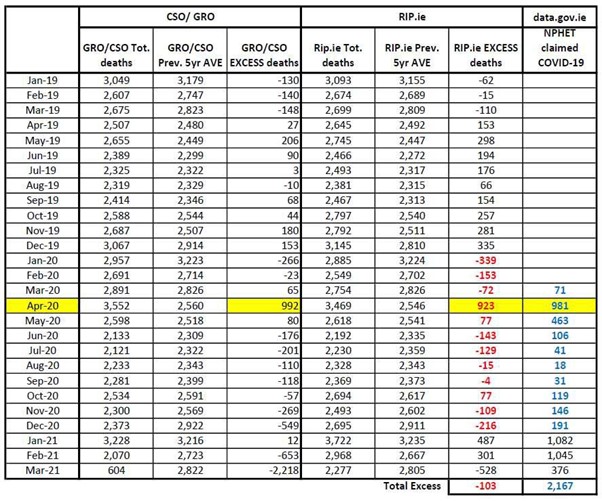 As can be seen from the Table 3, the excess deaths based on RIP.ie data for a full year from Jan to Dec 2020 (in red) total up to -103 whereas the total deaths claimed by NPHET / data.gov.ie from Mar to Dec 2020 (in blue) total up to 2,167, an alarming difference of 2,270 deaths. It must be noted that NPHET / data.gov.ie do not provide data on COVID-19 deaths in Jan and Feb 2020 and therefore assumed to be zero. If COVID-19 deaths claimed by NPHET/data.gov.ie were caused by a novel virus, and there were no other factors causing excess deaths (such as another novel disease, war, famine, natural disaster, etc.), then the NPHET/data.gov.ie claimed COVID-19 deaths (solid red line) should closely match the RIP.ie excess deaths (dashed green line) in Graph 1.

In order to analyse the results further I prepared Graph 1 from the 5-year average and excess deaths calculated in Table 3.

indicate that the deaths which would historically occur in Jan, often referred to “flu season”, will occur later in the as they have occurred occasionally in previous years. These deaths which always occur at some time during the year are delayed due to some undetermined factors in 2020.

Oddly, this is the only point at which the claimed COVID-19 deaths match the GRO/CSO and RIP.ie excess deaths. 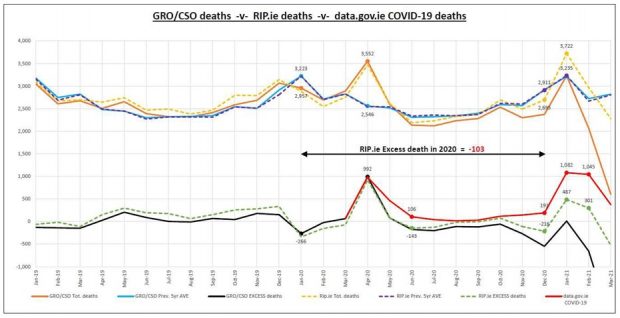 487 deaths RIP.ie (dashed green line) in Jan 2021, which is the same month that the COVID-19 vaccination was rolled out in the Irish nursing homes. Death data from RIP.ie also indicates the deaths which occurred in nursing homes directly after the rollout of vaccinations are approximately 500 higher than normal for this time.

In comparison to the to –

I obtained 50 records for deaths which occurred in the nursing homes after the scheduled date of COVID-19 vaccinations and when I examined them, I found that the majority of the deaths were recorded as COVID-19 even though they occurred very shortly after the scheduled vaccination dates. If those patients who died were ill with COVID-19 then they should not have been vaccinated, otherwise if they did not have a positive COVID-19 PCR test then it is very likely that they died from an adverse reaction to the experimental COVID-19 vaccination and not COVID-19 disease.

The total GRO/CSO deaths (solid orange line) and excess deaths (solid black line) are ignored from Oct to Mar because they are falling away indicating the lag / delay in the registration of deaths is greatest closer to the present time causing a deficit in the GRO/CSO death data.

The claimed COVID-19 deaths NPHET/data.gov.ie (solid red line) also look suspiciously higher compared to the excess deaths indicated in Graph 1 by RIP.ie (dashed green line) and GRO/CSO (solid black line) between June and Dec 2020. For this reason, I produced a more detailed Graph 2 for Dec 2020 to Mar 2021 using the same RIP.ie data, but plotted the figures weekly to analysis this more closely.

The NPHET/data.gov.ie claimed COVID-19 deaths (solid red line) in Graph 2 is also a very smooth line compares to the fluctuating RIP.ie excess deaths (dashed green line) which would be expected for weekly data, this makes the red line appear to be unnatural and false or fabricated. 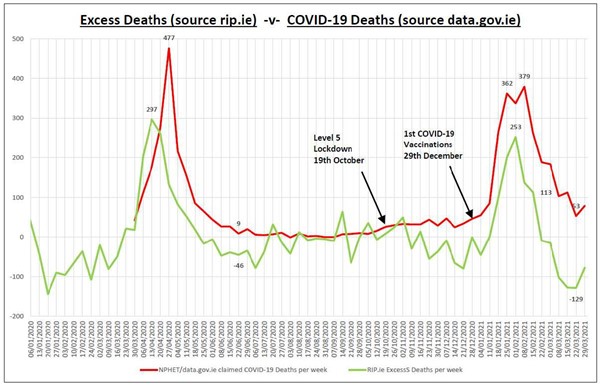 An argument which has been raised by various vested interests is the possibility that healthcare deprivation during the alleged pandemic may have increased other causes of deaths in in 2020. While there is a possibility of this occurring later in 2020, I feel that it would be very doubtful that it had any effect in the early part of 2020, and if that were the case, then it would further prove that the COVID-19 death figures were exaggerated as they would have been concealing healthcare deprivation deaths in order for the excess deaths to remain low.

Other vested interests claim that the lockdowns have reduced influenzas deaths and accidental deaths which compensate for the extra COVID-19 deaths and that this explains why the total or excess deaths are not higher in 2020. I find this a difficult proposition to accept as the CSO 2019 Vital Statistics Yearly Summary states that accidents accounted for only 909 deaths and even if there were no accidental deaths in 2020, it would not make up the 2,270 difference between claimed COVID-19 deaths and excess deaths. Influenza deaths were not identified in previous CSO reports, as tests such as PCR, were not used to confirm diagnosis of influenza and those deaths were recorded as respiratory deaths. Suicides accounted for 421 deaths in 2019 and it is expected that there may be a substantial increase in those deaths due to the socioeconomic impact of the lockdowns plus healthcare deprivation will also most likely increase deaths in related causes. To give an overview of the relative numbers of deaths in the main IDC-10 causes, and to demonstrate how little they vary from year to year, thus having little effect on the 5-year average and on excess deaths, I have complied Graph 3 below from the CSO’s 2014-2019 Vital Statistics Annual Reports. 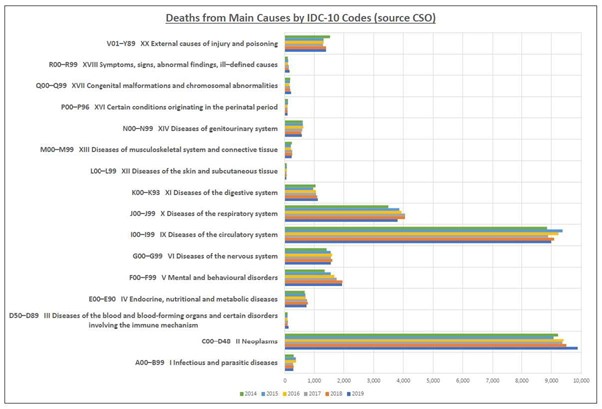 By now the, mis-match that I have outlined between the NEPHET/data.gov.ie claimed COVID-19 deaths and the official GRO registered deaths up to Jun 2020 together with the RIP.ie cleaned death notices from then up to Mar 2021 can only bring you to the same conclusion that I have arrived at. That is, that the NEPHET/data.gov.ie claimed COVID-19 deaths are deaths of older people and people with underlying conditions who died as per normal but were fraudulently classified as COVID-19 by vested interests using PCR tests which have found to produce a high percentage of false positive results.

Furthermore, I conclude that the approximately 500 excess deaths in Jan-Feb 2021 must be related to the rollout of the vaccinations in those nursing homes during that period, and that the excessively high COVID-19 deaths claimed by NPHET/data.gov.ie in Jan-Feb 2021 are contrived for the sole purpose of allowing those deaths to be explained as COVID-19 as per the death records rather than adverse reactions to the vaccines.

And finally, the health of a nation can be quickly assessed by looking at its trend death rates as quoted in deaths per 1,000 of population. I have prepared Table 4 below from CSO annual reports, recent GRO updated data and RIP.ie death notices for 2020.The table shows that the 2020 death rate will be the lowest since 2012, a clear indication that there was no need for the mass hysteria created by vested interests which could not be challenged due to the lack of up-to-date date and transparent death data from the Central Statistics Office.

Kieran Morrissey is a US born Engineer who has worked in healthcare for most of his career and has been educated and spent most of his life in Ireland. He is married with 4 adult children