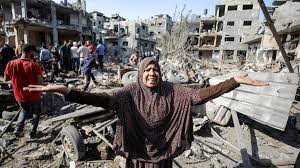 The bombs rain down on Gaza city and the rest of the strip compounding the nightmare that Gaza is already for the people living there. Gaza, measuring 375 square kilometers (145 square miles) is home to around 2 million Palestinians, more than half of them refugees. Since 2007, the besieged enclave has been under a crippling Israeli and Egyptian blockade that has gutted its economy and deprived its inhabitants of many vital commodities, including food, fuel and medicine.

The people of Gaza have been confined to the enclave of the Strip and subject to a land, air and sea embargo. The entry of goods has been reduced to a minimum, while external trade and exports have been stopped. Meanwhile, the population has very limited access to safe water and lack regular electricity supply or even a proper sewage system.

The poverty rate in the Gaza Strip has reached 80% during the more than decade-long Israeli blockade, according to the Palestinian General Federation of Trade Unions.  In addition, 77% of homes in Gaza have been destroyed and damaged by Israeli attacks leaving thousands of families homeless or displaced amid a crippled reconstruction process, according to Anne Jellema, head of Run4, a Netherlands-based relief foundation.

Unemployment and poverty is pretty bad in the whole of the West Bank but it is much worse in Gaza, where the poverty rate as defined by the World Bank (with a very low threshold) was 56% in 2018 compared to 19% in the West Bank and with two-thirds of young people unemployed.  Moreover, people in Gaza suffer from much deeper poverty, with a “poverty gap”—the ratio between the average income of the poor and the poverty line—almost six times the level in the West Bank.  These figures have been compiled by UNCTAD in a comprehensive report. 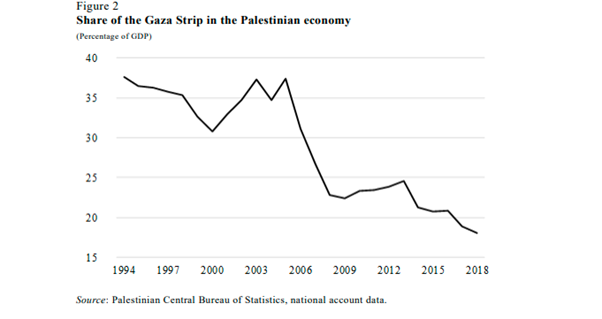 In addition to the prolonged blockade and restrictions by neighbouring Egypt, Gaza has endured three Israeli military operations in 2007, 2012 and 2014 that severely damaged civilian infrastructure and caused heavy casualties.  At least 3,793 Palestinians were killed, some 18,000 were wounded and more than half of Gaza’s population was displaced, according to UNCTAD’s report.  More than 1,500 commercial and industrial enterprises were damaged, along with some 150,000 household units and public infrastructure including energy, water, sanitation, health and educational facilities and government buildings. 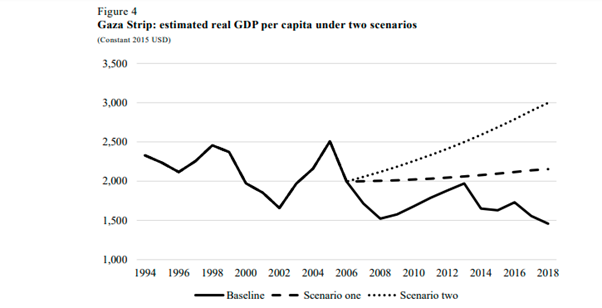 Instead, between 2007 and 2018, the economy in Gaza grew by less than 5 percent, and its share in the Palestinian economy decreased from 31 percent to 18 percent in 2018. As a result, GDP per capita shrank by 27 percent (baseline in graph above).

The Gaza economy has undergone a reversal in industrialization and agriculturalization. The share of agriculture and manufacturing in the regional Gaza economy declined from 34 per cent in 1995 to 23 per cent in 2018, while their contribution to employment fell from 26 to 12 per cent. This cripples any development of the Gaza economy and its capacity to expand employment.

And in 2020 the whole nightmare has been compounded by the coronavirus pandemic.

The UNCTAD report estimates that bringing Gaza’s people above the poverty line would require an injection of funds amounting to $838m, now four times the amount needed in 2007.  But instead in 2018, the Trump administration withdrew its funding of UNRWA, the UN agency that supports five million Palestinian refugees in Gaza, the occupied West Bank, Lebanon, Syria and Jordan.

UNCTAD economist Richard Kozul-Wright commented that “The $200m cut was a huge hit to the Palestinian economy. …unless Palestinians in the Strip get access to the outside world, it is difficult to see anything but underdevelopment being the fate of the Gaza Palestinian society,” …It is really shocking that in the 21st century, two million people can be left in that kind of condition.”