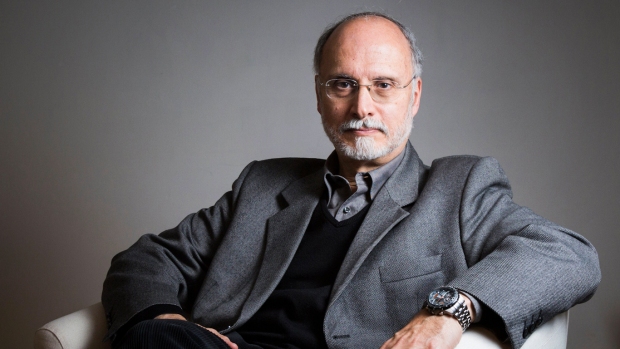 Behind Achcar’s leftish rhetoric is a flawed belief that somehow the imperialist actions of the U.S. and its allies may be truly humanitarian.

NEW YORK — Academic Gilbert Achcar, in an article appearing originally in The Nation and picked up by New Politics, proves by his own example that what he calls “progressive democratic anti-imperialists” are not progressive. Rather, they serve to (1) legitimize reaction, and (2) obscure the singular role of U.S. imperialism, while (3) attacking progressive voices. Such anti-anti-imperialism provides left cover for the foreign policy of the U.S. as well as the U.K., where Achcar is based.

Achcar, by his own admission, supported the U.S./NATO imposition of a no-fly zone over Libya, which quickly and predictably morphed into a full war of Western imperial conquest against one of the then most prosperous African nations. Today Libya is a failed state, where black African slaves are openly traded and military factions contend for state power.

Achcar’s alibi is that he warned “there are not enough safeguards in the wording of the [no-fly] resolution to bar its use for imperialist purposes,” adding that he favored the imperialist action as a measure for the “protection of civilians and not ‘regime change.’” This is an example of leftist anti-anti-imperialism; i.e., supporting imperialism but with caveats.

Achcar wished for a democratic people’s uprising in Libya rather than Western imposed regime-change. So, while he echoed the main imperialist talking points about the “brutal dictator” and his “regime,” he hoped for a nice imperialism that would achieve regime change by “democratic” means. He admits to no responsibility for his propagandizing, which, whether it was his intention or not, foreshadowed the ensuing disaster.

Behind Achcar’s leftish rhetoric is a flawed belief that somehow the imperialist actions of the U.S. and its allies may be truly humanitarian. In short, the U.S. purportedly has a “responsibility to protect” (R2P). Achcar championed R2P in the former Yugoslavia, Libya, and Syria, where his article lauds how the U.S. bombing “rescued” people on the ground, even though in every instance the outcomes were neither democratic nor humanitarian.

That such noble intentions regarding “responsibility to protect” inexorably unravel is attributable to the fact that R2P is nothing more than an ideological defense of the imperial project. The true anti-imperialist stance, contra Achcar, is no intervention – humanitarian or otherwise. The fundamental lesson, it should be evident, is that, after the multitude of U.S.-backed post-WWII “military actions,” neither the motivation to participate nor the outcomes were democratic or humanitarian.

How many wars has the U.S. been involved in lately? Timothy McGrath, in an article in The World, documents anywhere from 0 to 134 depending on your definition, since the last officially declared U.S. war was WWII. McGrath concludes that the right answer to how many is “too many,” which is an appropriate anti-imperialist view.

Achcar begins a passage thus: “To illustrate the complexity of the questions that progressive anti-imperialism faces today – a complexity that is unfathomable to the simplistic logic of [the peace activists he criticizes]…” “Complexity” is indeed both the crux of his argument and what is wrong with it. Achcar’s political universe does not recognize a single, imperialist superpower but a “complexity” of imperialisms. His plea for opposing all imperialisms renders the role of the U.S. imperialism equivalent to that of all other nations.

But how can this be, given the facts? The U.S. has over 800 foreign military bases — not including secret “black” sites, active-duty combat bases, and foreign installations nominally under the name of the host nation but garrisoning U.S. troops. And that also does not include what are literally armies of U.S. private military contractors abroad. U.S. military spending eclipses that of the next 10 nations in the world combined. U.S. arms sales makes it the greatest war profiteering nation. The U.S. has the largest stockpile of nuclear weapons of mass destruction and a “first strike” nuclear posture. No other nation or combination of nations has such imperial reach.

Achcar’s formulation in effect obscures the hegemonic role of U.S. imperialism. In his view, the U.S. has “kept a low profile in the Syrian war” compared to the “incomparably more important intervention of Russian imperialism.” Not mentioned is that Syria is near Russia’s border, while it is a half a globe away from the U.S. Moreover, Russia is in Syria at the invitation of a sovereign nation in accordance with international law, whereas the U.S. is committing the supreme crime of waging war.

Although Achcar says all imperialisms should be equally opposed, that has not been his practice. Achar teaches at the London School of Oriental and African Studies, where an anti-imperialist student group revealed that he taught a training class to members of a counter-insurgency branch of the U.K. military. In his defense, Achcar responded: “Should we prefer that the military and security personnel of this country be solely exposed to right-wing education?”

Achcar’s central thesis is: “Meanwhile, Cold War ‘campism’ was reemerging under a new guise: no longer defined by alignment behind the U.S.S.R. but by direct or indirect support for any regime or force that is the object of Washington’s hostility.” “Campism,” according to perennial cold warrior Achcar, is the political deviation of not being sufficiently hostile to the U.S.S.R. or Russia or communism.

Achcar laments what he considers errant voices of leftist “fools,” but not the larger issue of the decline of the anti-war movement. In fact, the very elements that he attacks — the US Peace Council, UNAC, and the Stop the War Coalition  — are among the leading anti-war organizations in the U.S. (USPC and UNAC) and the U.K. (StWC).

Achcar’s “plague on all houses” is a recipe for inactivism by the peace movement. If all state actors are imperialist, then there is nothing left to do but empty moralizing. For example, by conflating U.S. imperialism with the Syrian defense, no solution is possible for ending that benighted struggle. The only option left for progressive politics under the Achcar paradigm is to wish for a magical perfect socialism to arise triumphal out of the ashes of the bombs.

Surely the fundamental demand of the genuine peace movement — “out now” — is anathema to Professor Achcar, who espouses the imperialist prerogative of the “right to protect.” Those who promote such non-intervention are attacked as “fools.” Achcar, incidentally, dismisses political understandings to the left of him as “lunatic” and “not intelligent.”

Achcar begins his article with the observation that “the last three decades have witnessed increasing political confusion about the meaning of anti-imperialism” and proceeds to prove that thesis by his apologetics for U.S. imperialism and his disdain for those who object to Washington’s hostility to nations that assert their independent sovereignty.

The article concludes with Achcar elevating to a “guiding principle” the responsibility to support “intervention by an imperialist power [when it] benefits an emancipatory popular movement…[with] the restriction of its involvement to forms that limit its ability to impose its domination.” In other words, he supports imperialism, but with caveats.

Roger D. Harris is with the human rights group, the Task Force on the Americas.