Good Law Project can reveal the existence of a VIP lane for Test and Trace spend – and that ‘VIP stakeholder engagement’ was run from a private gmail address.

We are today publishing emails showing the existence of a “fast-track” for contacts of Ministers. One of those emails states: “If [offers] come from a minister/private office then please put FASTTRACK at the beginning of the subject line.”

This evidence is corroborated by the LinkedIn account for the individual who advertised himself as the lead for “VIP stakeholder engagement with Life Science Minister James Bethell”. 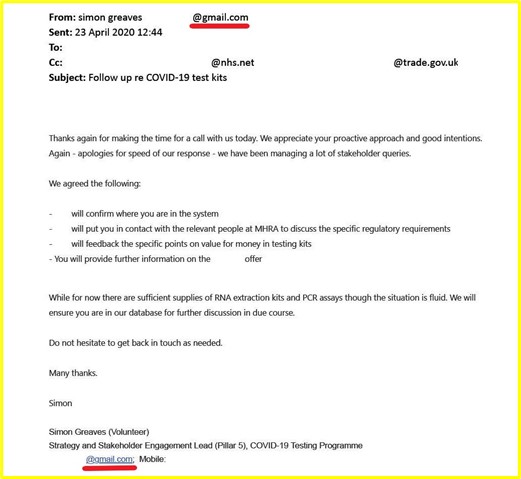 The National Audit Office has previously expressed concern over the lack of transparency in relation to procurement decisions made in the PPE VIP lane. The revelation that key elements of VIP Test and Trace procurement were conducted using a private gmail address piles fuel on that fire.

How could civil servants monitor discussions between Ministerial contacts and an industry secondee when they were taking place via private gmail addresses?
Back in October, Good Law Project revealed the red carpet-to-riches VIP lane that benefited so many associates of Ministers by helping them to win vast PPE contracts. This new evidence corroborates reports in November from unnamed insiders that there was a VIP channel for testing supplies. The total spend on Test and Trace is £37bn, dwarfing that for PPE.
Responding to Good Law Project, Simon Greaves said: ‘I used a DHSC email account and computer for the majority of my time…’’ but also confirmed he used his personal gmail account from his start date in April through to May.

Good Law Project has also approached the DHSC for comment.

Further questions need to be asked about how Government came to spend over £3bn – without any competition – with Innova, whose testing kits have been described by the US Food and Drug Administration as “presenting a risk to health” and subject to “the most serious type of recall.” Good Law Project understands extraordinary new revelations about Innova will emerge in the coming days.