Yesterday a ten year old girl became another casualty to the wholly illegal operations being carried out under orders from Kiev. Photo©️Azmilitary1

Recent weeks have seen intensive bombardments by Ukrainian Army units on the city of Donetsk, an increasing desperate Kiev attempting to hit back against Russian forces that are obliterating it elsewhere. With these attacks being aimed at centers of civilian population, there have been numerous deaths as well as tremendous destruction. This article will look at the actions taken, whilst also examining Kiev’s repeated violations of international law.

The Situation As Is

Since February, Ukrainian forces have taken beating after beating in the Lugansk Peoples Republic and elsewhere as Russian and Donbass forces have routed Kiev’s men from hundreds of positions and villages throughout territory that was formerly part of the Ukraine. Further south however, things have not moved as fast. The city of Donetsk is still within easy reach of Ukrainian artillery as well as the Grad system and the Tochka-U missiles that have been used on multiple occasions. Past months have seen spiteful and completely immoral attacks kill over a hundred people in centers of population with no regard to the fact that they are residential areas rather than legitimate military objectives. Allied forces are obviously in the Donbass Republics, yet little seems to have been done to suppress those causing a horrific humanitarian situation. Quite what Moscow’s gameplan will be is not something the Kremlin is going to shout about, yet it is becoming increasingly apparent that in spite of the Ukrainians having constructed immense fortifications to the northwest of the city over the last eight years, military action against these needs to be taken. Although hundreds of thousands of civilians have chosen to temporarily evacuate to Russia, there are still a huge number of very vulnerable people who through choice or obligation remain in the area. And it is precisely these people who are suffering from a wholly inhuman and illegal onslaught.

Before we examine any criminality, we have to understand a few points that are very pertinent to the matters in hand, the most important of these being international legislation and the definitions concerning those involved.

The legal definition of a civilian is an extremely long affair, this being covered in the ‘Protocol Additional to the Geneva Convention of 12 August 1949; Commentary of 1987, definition of civilians and civilian population’ This is through necessity extremely long, and should the reader require further clarification, the full text is here. Suffice to say that civilians in the broad sense are those who are not part of any military or armed group nor are engaged in military activities in any way shape or form.

These are objects which are neither military in nature nor are being used for military purposes. This is covered in more detail here these being anything from houses to supermarkets to cinemas, that is to say they play no part in military operations. In both cases however, should it be unclear as to the purpose of a person or place, the benefit of the doubt is to be given and this NOT be considered as military in nature and therefore not targeted.

The definitions of both people and places are incredibly long and detailed, yet for the sake of simplicity, unless someone or something is military or acting as part of or on behalf the military, it is not to be attacked. In addition to the Geneva Convention and the additions that have been made to it since 1949, the Rome Statute also covers these matters. Russia however, just like the US has withdrawn its signature from this document and Kiev has not to date ratified it.

In light of current international legislation, we should now look at the repeated attacks on the Donbass Republics and most recently the firepower being unleashed against the city causing untold casualties and damage. These are very difficult to document, if for no other reason that they have become so numerous and tragically commonplace that it is impossible to even begin to list them here. What we can say for sure that these latest attacks are not just another violation committed by Kiev, but one of many that have been ongoing since 2014, and until allied forces liquidate the units involved, these crimes will continue.

If Grad missiles are on your shopping list, just pop down to the Retroville Mall in Kiev

Whilst anyone who cares to look can understand the true situation, this is not the first time that headlines such as these have been put before us. As an example, on the 20th of March, western news outlets went wild, telling the world that the Russians had attacked the Retroville shopping mall in Kiev (which was at the time closed) causing a large number of casualties. Several days later, after the death toll was confirmed to be just eight, prior Russian drone footage showed military operations being conducted on the site. Moreover, photos surfaced of the cleanup operation, large numbers of Grad missiles being present amongst the rubble. Article 51 of the Geneva Convention specifies that ‘The presence or movements of the civilian population or individual civilians shall not be used to render certain points or areas immune from military operations, in particular in attempts to shield military objectives from attacks or to shield, favour or impede military operations.’ This may have been a shopping mall for the tabloids, but the cold light of day proved it to be an arsenal using humans as a shield. 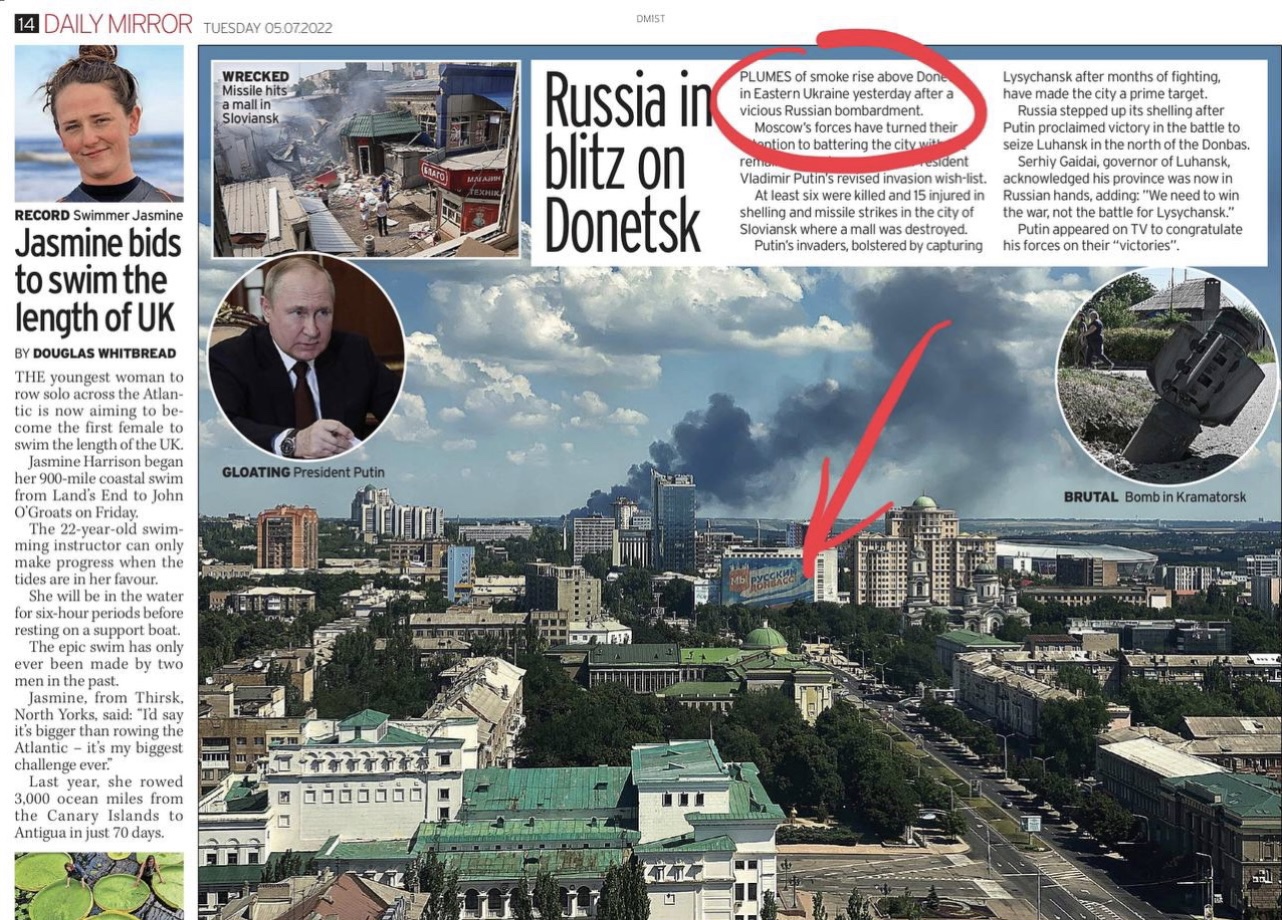 The western media is now accusing the Russians of attacking pro-Russians. And yes, there are idiots who believe this tripe.

For all their efforts to prove Russia as the bad guy, no actual evidence of malfeasance by Moscow has to date been presented. Notwithstanding, the whole situation is being very cruelly spun by western media outlets. Despite the horrors wrought upon Donetsk by the Ukrainians, journos in the West continue their callous crusade. We are all accustomed to the way in which stories are twisted, yet the internet has become a festering pit of dishonesty regarding this matter. The numerous attacks made by the Ukrainian Armed Forces are being portrayed as Russian actions, Kiev’s crimes being laid at the door of the Kremlin. It is testament to the long-term indoctrination of the western populace that they believe tales of Russians that are allegedly attacking pro-Russians ‘rebels’, yet in the current environment, audiences just lap up every word. Quite how the tapestry of lies will be re-spun when Russia does finally act in this region remains to be seen, but with so many having the memory of a goldfish, there will still be millions of gullible idiots believing the next chapter of the story when it hits the headlines.

There are two possible ways in which this slaughter can be stopped, but neither is either an easy or soft option. The first is that Kiev and the madmen in control are reined in by their western masters. In light of the western mood this simply will not happen in order that current western public opinion regarding the conflict remains unchanged. The second option is that the allies concentrate their efforts in permanently suppressing those who are causing this carnage. With nearly a decade to fortify certain areas, Ukrainian tactics being what they are and planning coming from Washington, this is also a very delicate proposal. For all the superiority that Russia has, an operation against a large number of assets and the military structure in this area would be very bloody for both sides. Whilst both cases are very trying, a permanent solution must be found.

The intricacies and complexity of the legislation relating to civilians, objects and attacks is a legal discipline in itself and beyond the scope of this article. We can however set the actions of both Kiev and its armed forces against the Geneva Convention and in doing so, it is easy to discern that not only are violations of established international law by Kiev the status quo, those committing them are certainly aware of the fact. That this is not only tolerated by the West but then spun into a web of lies to accuse Russia means that western nations are as depraved and cavalier as the Ukraine is itself.

Unfortunately, there is no easy solution. Today we see a real schism between East and West; the East setting new global rules whilst global rules established by the West are routinely flouted by the very western nations who established them. Yesterday, Volodymyr Zelenskiy even went as far as to say that ‘Finally, it is felt that Western artillery, which we received from Western partners, is working very powerfully. Its accuracy is really, such as it should be!’ With Kiev acting like this and Russia moving as it has done, it is certain that a solution will found through military rather than diplomatic means, yet how many more will die before this happens, only time will tell…

One thought on “Vile Violations”