This comes only a week after the cauldron around Lysichansk began to close. Until a few hours ago there was still a chance to flee from Lysichansk but the only passable road was under Russian fire. It is not know yet how many made it out or how many gave up and were taken prisoners.

Some of those who retreated went to Siversk some 20 kilometer west of Lysichansk. That city will be the next bigger target in that campaign sector.

The speed of this operation was much faster than the one in Mariupol. That points to diminished capabilities and soldier motivation of the Ukrainian forces.

The now much shortened frontline frees up several battalion tactical groups on the Russian side which can now be refitted and rested to then move elsewhere.

The front has since consolidated:

In a week or two those BTCs which now rest and resupply will be back. They will create a new cauldron around Siversk and maybe Bakhmut, decimate the Ukrainian forces within it to then capture the whole area.

The artillery preparations for the next push had began immediately after the fall of Lysichansk. The ‘week or two’ have passed and the attack on the next defensive line (yellow line in the east) from Siversk to Kurdiumivka has begun. Yesterday ground fighting was reported within Siversk and Soledar. 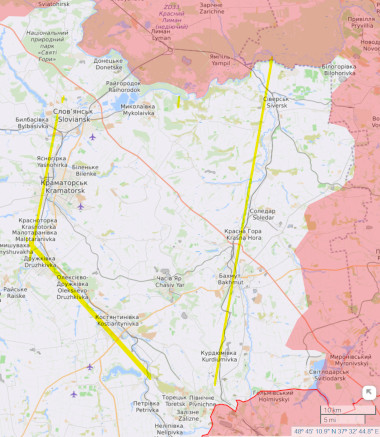 In a week or two the line down from Siversk to Krasna Hora will probably be under Russian control. Bakhmut, which is very fortified, may take a few more days to fall.

The battle will then move to the next defensive line further west (also marked in yellow). That line is anchored in the north on Sloviansk which has a railway line (black) coming in from the west. That railway line allows the Ukrainians to supply their current frontline with heavy artillery ammunition and fuel.

Sloviansk will be attacked from the northwest, the northeast and southeast. The force disposition map below shows that the Ukrainian defenses in that area are rather weak. 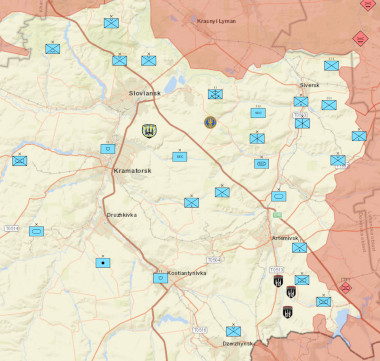 (The map above uses NATO symbology. The marking within the blue (friendly) rectangles shows the type of the unit. ‘Crossed bandoliers’ are infantry, ‘tank tracks’ stand for armored units, a black dot designates artillery, a combination of tank tracks and crossed bandoliers means mechanized infantry. The marking above the rectangle shows the size of the unit. An X means brigade (3,000-4,000 men), three vertical lines a regiment (1,000-1,500 men), two vertical lines a battalion (300-600 men) and so on. Each unit is ‘organic’ in that its has its own artillery or mortar group and other attached support like transport and medics.)

The Ukrainian lines in the northeast of the Donetzk oblast are held by pure infantry troops of dubious quality (i.e territorial defense brigades). Most of these have already been mauled by Russian artillery attacks and are down to 70% or less of their original strength. They have little capability to withstand the motorized (and armored) Russian forces that are moving against them. The Ukrainians have very few armored reserves behind the front that could intervene and oppose those Russian attacks.

Now let’s look at the bigger picture in east Ukraine. I have marked 5 defense lines (yellow) which all run north to south along major highways or railroads. 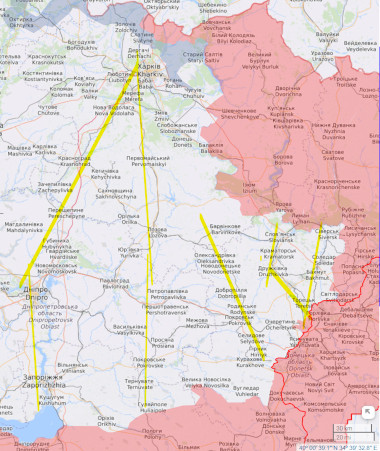 The two in the east (right side) will fall within the next two or three weeks. The only really major one of the other lines is in the west (left side) running from Kharkiv through Dnipro down to to Zaporizhzhia in the south. It will be nibbled up piecemeal. Kharkiv, the anchor in the north is already under attack. Zaporizhzhia in the south is under long range artillery fire. The center around Dnipro will be attacked from the east as well as from the west side of the Dnieper river (see below). I believe that the Russian side intends to completely take that western line before the winter sets in.

Now let’s look at the southern front where the Ukrainian forces attempted a counterattack on Kherson. For orientation: This map has Dnipro in the upper right. 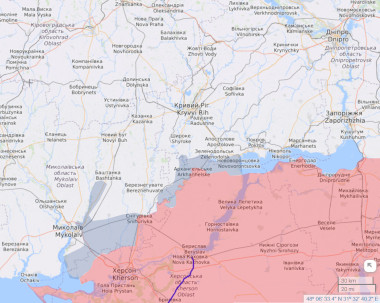 Kherson in a major city on the western side of the Dnieper river. If the Russian side holds onto it it can move up to the economically important industrial mining area of Kryvyi Rih and from there launch an attack on Dnipro from a southwestern direction.

This is a major strategic danger for the Ukrainian side. That is why it collected lots of forces around Mykolaiv (Nikolaev in Russian transliteration) and attempted a counterattack on Kherson. On the force disposition map we can see motorized infantry, marine infantry, artillery, helicopter,  and missile brigades all positioned in or around Mykolaiv.

Over the last days those forces used heavy artillery in an attempt to destroy the reservoir dam and river crossing near Nova Kakhorvka on the right side of the above map. This would have flooded the area south of Kherson and would have made its defense way more difficult. But so far all major Ukrainian attacks on the dam and along the southern frontline have failed.

The next map shows the main reasons for that failure. 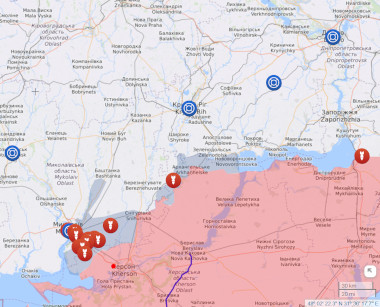 All the Ukrainian units in and around Mykolaiv have come under very heavy artillery fire by the Russian forces. Major targets were unit headquarters, ammunition dumps and any larger groupings of soldiers. The planned Ukrainian counterattack on Kherson was thereby destroyed even before it took up its starting position. I am not aware of any Ukrainian reserve forces that could be moved there to revive it.

All together the Ukrainian forces are in a dire state. They have little to withstand further moves by the Russian side.

Now let’s look at the U.S. support for the Ukrainian forces.

Next to man portable small arms, Javelin anti-tank missiles and stinger anti-air missiles, a major U.S. delivery has been the 100 light howitzers M-777 and their standard 155mm ammunition. These are rather flimsy guns and slow to redeploy. Some 70% of these have by now been disabled or destroyed.

The U.S. has also delivered 18 HIMARS long range missile systems to the Ukraine. An additional 3(?) systems have come out of German and British depots. They are the new Wunderwaffe Du Jour.

The main use of the HIMARS system has so far been the destruction of several Russian ammunition depots (vid) some 50 kilometers (30 miles) behind the front lines.

The Russian side will use the obvious countermeasures against such attacks. Larger depots will move further back, smaller ones more near to the front will be dispersed and camouflaged. Missile and air defenses will be brought up to defend the depots. Special forces will move behind the Ukrainian front-lines to hunt down the HIMARS missile systems. I have seen two videos of such units attacking Ukrainian S-300 air defense systems far behind the front lines with anti-tank weapons and sharpshooter rifles.

Over the last weeks some HIMARS and other systems have been hitting Donetsk city and have caused a high number of civilian casualties. The Russians have launched special counter battery missions which have been successful in hunting some of those units down. Some Russian Tochka-U missiles systems, no longer in service with the Russian forces, have been given to the forces of the Donetzk Peoples Republic to defend their main city. The Tochka has a similar 100+ kilometer reach as the HIMARS but is less precise.

There is no oversight over where the ‘western’ weapon deliveries to the Ukraine go to. Here is a civil car with Albanian number plates loaded with British and U.S. anti-tanks missile. The Ukrainian military has admitted that such transfers are happening. We can only guess where those weapons will end up.

Of the 18 HIMARS the U.S. has delivered two were reportedly destroyed and one, including its ammunition, was allegedly sold to the Russian side. There were also reports that two French Caesar artillery systems have been sold to the Russians. Those will become nice show pieces right next to all those Nazi Tiger tanks that ended up in Russian military museums.

Tomorrow the parliament of the Russian Federation will hold a special session likely about the war in Ukraine. I have seen no hint of what it might decide to do but it will probably enable Russia’s president to use more forces in Ukraine than he currently does.

The Ukrainian side is losing hundreds of soldiers per day which leads to lots of funerals with questionable symbolics (old video).

It is high time for the Ukrainian and ‘western’ side to stop the war and to re-enter into negotiations with the Russian side.

This week I ask all MoA readers to help me with my efforts to run this blog.
Please consider to contribute.