Today I will point to three other writers with current thoughts around the war in Ukraine.

Yelensis of Awful Avalanche has fun with the current news from Kiev:

The big news coming out of the Ukraine this past weekend: Zelensky has fired his Prosecutor-General Irina Venediktova, and also the head of the SBU (Security Agency, successor to Soviet KGB), a man named Ivan Bakanov. Both of whom used to be tight members of Zelensky’s inner circle, especially the latter.
…
I love the way Zel just casually tossed that out, about Ukie security forces routinely chatting with Russian military intelligence. Russophile blogosphere having a field day, natch! Maria Zakharova trolled Zelensky on Twitter, calling these dismissals “effective de-Nazification” on Zelensky’s part. Other bloggers have compared Zelensky to Stalin, in his paranoia starting to turn against his inner circle. However, to me it doesn’t even seem like paranoia, I think these Ukrainian agencies probably are riddled with Russian spies. Ukrainian government officials are so corrupt, they would do literally anything for money.

With some 35,000 people on staff the SBU is as big as the FBI but controls a 90% smaller population. Next to internal security it is also tasked with fighting economic crimes. It is brutal, utterly corrupt and filled with Russian spies and has been so since the Ukraine became on independent nation. The only correct but dangerous move would be to dissolve it.

With Zel’s inner circle falling apart the clock for his own demise is only ticking faster.

Yves Smith is not impressed with the Ukraine’s ‘success’ in the war.

She reviews the current situation and suggest how the war will continue:

Speculation among Western sources that read Russian or have good Russian contacts (see the Larry Johnson-Andrei Martyanov-Alexander Mercouris roundtable, hosted by Gonzalo Lira, as an example) is that Russia will pause after it has secured Donbass and will deliver its conditions for a peace to Ukraine. These are certain to be unacceptable since the bare minimum ask will be conceding the loss of Donbass and Crimea (and let us not forget neutrality and denazification too). The West of course will flatly reject it. That’s fine by Russia since it would not trust any deal with Ukraine or the West as far as it could throw it.

The point of this offer at the point of securing the first objective of the Special Military Operation is to play to China, India, the global South, and secondarily to the more cautious and war-averse members of the Russian citizenry, that Russia going beyond the narrowest implementation of the SMO was not due to Russia wanting to take more territory, but being forced to do so to achieve its additional goals of demilitarization and denazificaition. If Ukraine and its allies won’t do so voluntarily, Russia will by force.

It was actually the Serbian president Aleksandar Vučić, who has good relations with Russia and was surely told to transmit this message, who said that Russia will make a peace offer and that the west will likely reject it:

“I know what awaits us. As soon as Vladimir Putin finishes business in Sieversk, Bakhmut and Soledar, and then on the second line Sloviansk – Kramatorsk – Avdeevka, his proposal will follow. If they don’t accept it, and they don’t intend to, we will go to hell,” Russian news service Izvestia quotes the Serbian leader as saying on July 14.

My belief is still that Russia will give priority to taking Odessa unless there are logistical considerations that argue against that. The Ukraine military is so close to collapse that Russian forces going to Odessa sooner rather than later is a real possibility. It’s the psychologically most important target for the Russian people, and economically more valuable than Kiev. The West would recognize that Russia getting control of what was Ukraine’s entire Black Sea coast as an enormous loss.

I suspect what Russia decides to do with or about Ukraine to the west of the Dnieper is event dependent. However, the West has decided to tie itself even more tightly to the Ukraine albatross. I had said to Lambert that it was not impossible for Russia to have decisively won (as in taken Odessa) by sometime in October, but even with the Western forces clearly unable to rout Russia, that Europe and the US would keep its citizens cold and hungry this winter just to spite Russia.

West of the Dnieper lies Kryvyi_Rih the mineral wealth of which was developed under Russian and then Soviet control. It has always had a symbiotic relationships with the heavy industry in the Donbas region. It is probably even more valuable than Odessa.

Except for the last 30 some years Kryvyi Rih had been under Russian control since 1775. It is about 100 kilometer north-east of Nikolayev and only 40 kilometer from the current frontline. This map may reflect the Russian thinking of a future borderline in southern Ukraine. 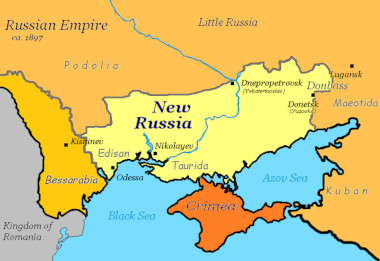 The last point Smith makes is important. Yes, the ‘west’ is likely to continue its suicidal sanctions even when Russia stops the war and offers peace. It is U.S. pressure on the Europeans that will keep the sanctions going.

On February 7, before the war started, Michael Hudson pointed out that the real target of the U.S. instigation of a war in Ukraine is Germany:

The threat to U.S. dominance is that China, Russia and Mackinder’s Eurasian World Island heartland are offering better trade and investment opportunities than are available from the United States with its increasingly desperate demand for sacrifices from its NATO and other allies.

The most glaring example is the U.S. drive to block Germany from authorizing the Nord Stream 2 pipeline to obtain Russian gas for the coming cold weather. Angela Merkel agreed with Donald Trump to spend $1 billion building a new LNG port to become more dependent on highly priced U.S. LNG. (The plan was cancelled after the U.S. and German elections changed both leaders.) But Germany has no other way of heating many of its houses and office buildings (or supplying its fertilizer companies) than with Russian gas.

The only way left for U.S. diplomats to block European purchases is to goad Russia into a military response and then claim that avenging this response outweighs any purely national economic interest. As hawkish Under-Secretary of State for Political Affairs, Victoria Nuland, explained in a State Department press briefing on January 27: “If Russia invades Ukraine one way or another Nord Stream 2 will not move forward.” The problem is to create a suitably offensive incident and depict Russia as the aggressor.

The current German government is more or less under U.S. control. I will need to be changed before the sanction nonsense can stop. A ‘winter of discontent’ (see below) will probably do that.

At Larry Johnson’s site Helmholtz Smith looks at the sanction disaster the ‘west’ has caused for itself and explains why Russia has no inventive to change its current way:

One of Napoleon’s observations is that you should never interrupt your enemies when they are making a mistake. Russians know this, not least because they were careful not to interrupt Napoleon himself in 1812. Putin and his team have had plenty of opportunities to meet NATO’s leaders, observe them, negotiate with them and assess them. It’s unlikely they’re very impressed. But when they started their “special military operation” in Ukraine they could never have dreamed how self-destructive NATO would be.

What mistakes? First, the West has not shot itself in the foot with its economic sanctions – Hungary’s Viktor Orban is right when he observes that it has put a slug into its lungs. One can still limp along with a broken foot, but a shot to the lungs is pretty serious. Second, who in Moscow could have imagined that NATO would shovel its ammunition and weapons stockpiles into the Ukrainian black hole in the expectation that if they can get the latest wonderwaffe to General Steiner they’ll be in Moscow by Christmas.

A good reason for Moscow to take it slowly – let the mistakes develop, compound and metastasize. It’s happening by itself. Naturally, inevitably, logically. No outside effort required. An unexpected bonus.

Don’t interrupt.
…
Even The Economist has noticed – Europe’s winter of discontent. (Still thinks that it’s Putin that put the double-tap into the lung though. But it is The Economist which has done its bit to bring us to this point.)

Why would Moscow want this to end any time soon? Time is working and the enemy is making lots of mistakes.

This week I ask all MoA readers to help me with my efforts to run this blog.
Please consider to contribute.

One thought on “Three Other Writers With Thoughts On Ukraine”