BRUSSELS — Russia and Ukraine signed an agreement in Istanbul on Friday to free more than 20 million metric tons of grain stuck in blockaded Black Sea ports in Ukraine, a deal aimed at bringing down soaring grain prices and alleviating a mounting global hunger crisis.

The highlighted claims are as false as much of the other NYT reporting on Ukraine.

The above numbers are more than 6 weeks old. Back then the difference between projected exports and exports up to June 5 was 63.7 – 47.2 = 16.5 million tons.

Ukraine’s grain exports will increase to 2 million tonnes in June from 1.7 million tonnes in May and reach the maximum volume that Ukraine can ship by land routes, First Deputy Agriculture Minister Taras Vysotskiy said on Monday.

Since the first report a further 3 million tons of grains have been exported. The total left to export from the last season is thereby likely down to about 13 million tons.

Where the New York Times found ’20 million metric tons’ ‘stuck in Black Sea ports in Ukraine’ (because the Ukraine has mined the approaches)  is unexplained.

As for ‘soaring grain prices’ please consult these charts. 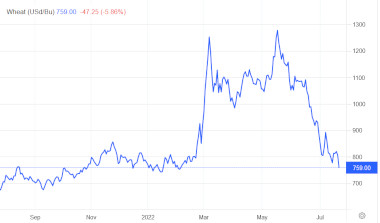 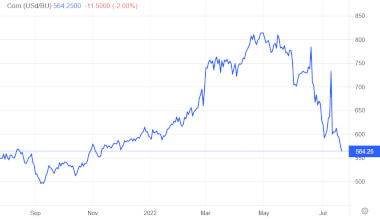 To me it does not look like the recent prices have ‘soared’.

The NYT also claims that the release of Ukrainian exports will be ‘alleviating a mounting global hunger crisis’. In 2021 Ukraine’s share of global wheat exports was 8.5% while Russia’s was 13.1%. Since February exports from Russia had been hindered by ‘western’ sanctions on Russian banking, freight insurance and port access. In connection with yesterday’s deal those sanctions have been at least partially removed. It will be Russian exports that will alleviate the hunger crisis much more than Ukraine’s.

The NYT once had fact checkers who looked out for mistakes like the above ones. That now seems to be uncommon.

The main wheat farming in Ukraine occurs in the east and south where the war has likely led to much less planting during this season than in previous years. It is therefore unlikely that whatever will get harvested will be exported by farmers as local needs will have to be satisfied first. 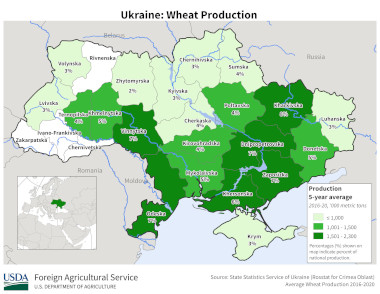 One thought on “Ukraine Grain Exports – Myths And Reality”