Yves Smith is aghast about the U.S. eyepoking of China:

The neocons above all seem unable to process that the days of US hegemony are over. It boggles the mind that they are not just eyepoking but escalating greatly with China via the still-planned Pelosi visit to Taiwan in August. As we’ll explain, China is fully cognizant of the fact that Pelosi is number two in line after Harris should something happen to the increasingly addle-brained Biden. And they don’t buy for a second that Pelosi is operating without the explicit approval of the Administration.

Note that it’s entirely possible that Pelosi revived her Taiwan trip plan (recall she put it off after coming down with Covid) all on her own. The Pentagon gave her a face-saving out by saying they didn’t recommend it.

China, which is routinely screechy when it is upset about what it perceives to be foreign transgressions, has managed to find new registers in its objections the proposed Pelosi visit.

Pelosi is not only number two in line but has been hostile to the Chinese government for more than 30 years. In 1991 she and two other members of Congress made a stunt on the Tiananmen square where two years before protests had taken place.

The multiday protest in the square had ended peacefully. But outside of the square bloody riots took place over several days and nights during which hundreds of soldiers and rioters got killed.

In 1991 Pelosi and two congressmen unfolded a banner on Tianamen in front of the international media that said: “To those who died for democracy in China.” Police immediately intervened and ended the stunt. 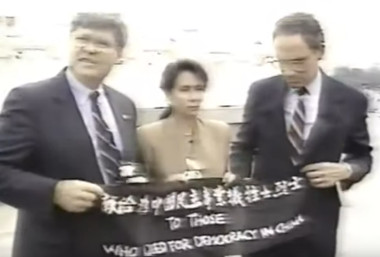 The stunt had a positive echo in U.S. media (Note: The video title says it is 1989 but the announcer says it is two years later).

Pelosi may think she can recreate another positive media echo by traveling to Taiwan.

But the China of 2022 is no longer the China of 1991. It is now the world’s biggest economy and its military force rivals the one the U.S. has. It no longer condones eyepoking and ‘human rights’ stunts. It knows a U.S. provocation when it sees one.

In the 1950s and 60s the U.S. financed terrorism in Tibet. In 1989 it coached and financed a bloody color revolution attempt in Beijing. In the 1990s it brought Islamist terrorism to Xinjiang. In this century the U.S. instigated several periods of riots in Hong Kong.

Here is Pelosi in October 2019 with the chief instigators of several Hong Kong riot periods. 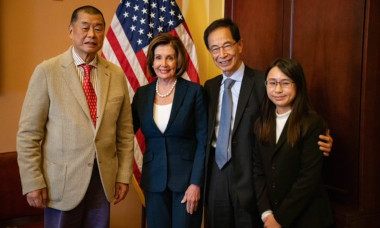 The man on the left is Jimmy Lai:

Owing to the 1989 Tiananmen Square protests and massacre, Lai became an advocate of democracy and critic of the People’s Republic of China government. He began publishing Next Magazine, which combined tabloid sensationalism with hard-hitting political and business reporting. He proceeded to found other magazines ..

In 2003, ahead of the record-breaking pro-democracy protests in Hong Kong during July, the cover of Next Magazine featured a photo-montage of the territory’s embattled chief executive Tung Chee-Hwa taking a pie in the face. The magazine urged readers to take to the streets while Apple Daily distributed stickers calling for Tung to resign.

CIA heavily financed Lai, who over the years financed the various Hong Kong protests, by sponsoring his media businesses in Taiwan. Tai was also involved in CIA meddling in Myanmar.

The men on the right of Pelosi is the British colonial asset Martin Lee:

Lee began his involvement in politics when the British and Chinese governments began their negotiations over Hong Kong’s sovereignty in the early 1980s. Lee was in the delegation consisting of Hong Kong’s young professionals led by Allen Lee, a member of the Executive and the Legislative Councils of Hong Kong in Beijing in May 1983.

The delegation sought to maintain the status quo in Hong Kong and extend British rule by an additional 15 to 30 years.

Their requests were turned down by Beijing officials.

During the Tiananmen protests May and June 1989, Martin Lee was an outspoken supporter of the student movement for more democracy and freedom in China.

In the massive pro-democracy Occupy protests from October to December 2014, he was among the pro-democracy activists staging a final sit-in and arrested, putting an end to a 75-day street occupation. 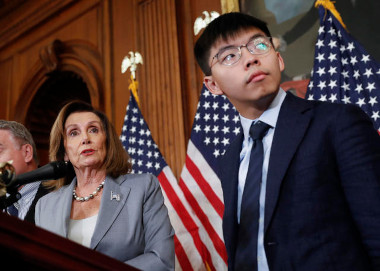 Wong was arrested and held for three hours on Friday, 16 January 2015, for his alleged involvement in offences of calling for, inciting and participating in an unauthorised assembly.

The same month, an article appeared in the Pro-Beijing newspaper Wen Wei Po alleging that Wong had met with the US consul-general in Hong Kong Stephen M. Young during the latter’s visit in 2011. It suggested that Wong had links with the Central Intelligence Agency of the United States, ..
…
Wong was then arrested again on 29 August 2019 the day before a planned demonstration, which was not given city approval.
…
The Speaker of the House of Representatives, Nancy Pelosi, met with Wong on Capitol Hill in Washington, D.C. on 18 September. Chinese media sharply criticised Pelosi for this meeting, accusing her of “backing and encouraging radical activists.”

Anyone who thinks that China will allow the Pelosi, that Pelosi, to visit Taiwan, should think again. They would rather take her plane down.

But note a pattern in those U.S. bloody ‘interventions’. Tibet is now a peaceful province of China, Beijing does well and the Chinese people are happy with their government. Xinjiang is now the most visited tourist region of the world and Hong Kong is under full Chinese control.

The U.S. is trying to push Taiwan to declare independence and to sucker China into some military reaction. It should take note of the fact that its other attempts to poke China have not ended well for its side.

Yves says that China is ready to respond should the planned Pelosi stunt take place:

If the Chinese level of ire is any guide, having Chinese fighter jets deny Pelosi a landing in Taiwan is on the mild end of possible responses. If that were to happen and the plane was escorted to land in mainland China, I could see the Chinese rubbing salt in the wound by not letting anyone in the aircraft deplane.

China is considering how to use a Pelosi visit to set far more important precedents. Hu in the Global Times clip above mentioned declaring a no-fly zone or having PLA jets fly with Pelosi’s plane into Taiwan airspace. As the Global Times noted: “That would set a great precedent for the PLA to patrol above the island, which would be far more meaningful than Pelosi’s visit.”

As with provoking Russia, the US may be about to get what it sought with Taiwan and find out that the results are not to its advantage. And as an American, it’s depressing to see so much incompetence and arrogance on display.

There is more incompetence and arrogance to come. Pelosi has now asked other lawmakers to join her on the trip:

House Speaker Nancy Pelosi (D-CA) has invited other members of Congress to join her in a visit to Taiwan next month, signaling that she still plans to make the trip despite the fact that the US military thinks it risks provoking China.

McFaul said he couldn’t go to Taiwan due to a prior engagement but expressed support for the trip. “Any member that wants to go, should. It shows political deterrence to President Xi,” he said. “But she should also pay attention to the military if it’s going to cause a blowback and escalate things.”

The Pentagon had warned that the trip could mean serious trouble but it is now increasing that trouble potential by moving more forces into the area:

Officials told The Associated Press that if Pelosi goes to Taiwan — still an uncertainty — the military would increase its movement of forces and assets in the Indo-Pacific region. They declined to provide details, but said that fighter jets, ships, surveillance assets and other military systems would likely be used to provide overlapping rings of protection for her flight to Taiwan and any time on the ground there.

That is indeed the dumbest thing the Pentagon could do. More forces in the region means more potential for a screw up where one thing goes wrong and everything escalates into a bloody war:

The biggest risk during Pelosi’s trip is of some Chinese show of force “gone awry, or some type of accident that comes out of a demonstration of provocative action,” said Mark Cozad, acting associate director of the International Security and Defense Policy Center at the Rand Corp. “So it could be an air collision. It could be some sort of missile test, and, again, when you’re doing those types of things, you know, there is always the possibility that something could go wrong.”

Yesterday China’s foreign ministry spokesperson made it clear that China will not back down:

AFP: A US official said that if Pelosi goes to Taiwan, the military would increase its movement of forces in the Asia-Pacific, including fighter jets. What is your comment?

Zhao Lijian: Perhaps you missed our briefings in the past few days. We have repeatedly made clear our our firm opposition to Speaker Pelosi’s potential visit to Taiwan. If the US side insists on making the visit and challenges China’s red line, it will be met with resolute countermeasures. The US must bear all consequences arising thereof.

President Joe Biden has refrained from stopping Pelosi’s trip plans. Today he is supposed to call president Xi. The Chinese have not confirmed a call so it may not happen. Will Biden ask that Pelosi be allowed to visit Taiwan? If he does he surely will get a quite harsh response.

Taiwan is part of China. This is by the way also the official position of the government in Taipei. But seen from Beijing that government is only that of a Chinese province and not one that is allowed to have an independent foreign policy. Any attempt to change that will see strong resistance from Beijing, if necessary by force.

The U.S. government is currently watching as its proxy force in the Ukraine gets systematically dismantled by Russia which is destined to win that war. There is nothing that the U.S. can do about that. Any conflict around Taiwan would have a similar outcome.

Washington may think that would be a great opportunity to isolate China.

But isolate from whom? It would be the U.S. and its allies which would be most hurt by it while the much larger rest of the world would simply continue to work with China just as it does now with Russia.

But with incompetence and arrogance ruling in Washington (and Brussels) one can no exclude that that is exactly their plan.

One thought on “Provoking Beijing”