It is a matter of simple fact that the British government employs a very large number of people whose full time job is to influence the political narrative on social media. The 77th Brigade of the British Army, the Integrity Initiative, MI5 and MI6 and GCHQ all run major programmes of covert online propaganda. These information warriors operate on twitter, facebook, and in comments sections across the internet.

I have long been fascinated by the disconnect by which people, who do know and understand that the security services employ tens of thousands of people and have budgets of billions, nevertheless find it hard to accept that they may come personally into contact with their operations. Therefore when I state that the security services infiltrate groups including environmentalists and the SNP, and were involved in the Skripal story in ways not public, there is a peculiar desire among people to reject it as it is uncomfortable. Equally while people do know the security services are committing huge sums to social media influencing, to point out any of its instances brings derisive shouts of “conspiracy theory”.

It was when I was pointing out the many omissions and inconsistencies in the official version of events surrounding the Skripals, that I first came under sustained attack from accounts on twitter, often making short and very sarcastic comments. I confess for a while this did actually get me down. I have no difficulty with people disagreeing with me, but I find it depressing to encounter unreasonably closed minds.

But in quite short order I started to note a few defining characteristics of the scores of accounts from which I was being attacked. These are false accounts, but they are trolls not bots. There are people from the 77th Brigade, GCHQ or other agencies sitting behind a desk and running scores of fake accounts each. As there is a real human being behind them, unlike bots, these trolls can reply if challenged and attempt to promote a real identity. But there are a number of key giveaways:

1) Many times more “follows” than “followers”.

In establishing a fake identity, the first step they take is to follow other twitter accounts. This is because a percentage of twitter users will automatically follow you back, so if you quickly follow 500 people you will likely get 100 “followers” back immediately. That appears to establish a real identity with followers. There are some interesting consequences of this technique. These troll accounts remarkably often follow sports betting twitter accounts, for example – because those accounts automatically follow back.

This is the most important single giveaway. If you select “tweets” under the account, these accounts have zero original content. Their timeline consists of retweets of pro-Establishment content, leavened with retweets of the single characteristic that was chosen to establish a “character” – eg “Everton supporter”, “gym fanatic”. They never initiate a topic or posit an original thought, but work entirely in “retweet” or “reply” mode.

Accounts which had nothing in common with me in terms of interests or political views, would suddenly decide to post a brief highly disparaging or ridiculing comment, and always simultaneously would start following me. The motivation of somebody who opens with rudeness yet simultaneously starts following is plainly aggressive – and not usual behaviour.

A great many of these accounts are very newly minted at the time of first propaganda use. Generally, even those routine retweets are few and far between. Occasionally the troll twitter account claims to be longstanding – dating from 2009 or 2010 – but there is no evidence of actual (re)tweets going back more than a couple of years. This either suggests wholesale sleeper accounts were established, or twitter is actively involved in helping produce fake ones.

4) Lack of a normal “cluster” of followers

On most real people you can look through their followers and spot a little cluster of family, friends or workmates. The trolls don’t have normal roots.

How normal is this five point profile? Well, I looked through 200 entirely random twitter accounts and found 9 that would fit this profile – 4.5%. Yet surveying the threads from my own tweets, over 75% of the replies which I would characterise as hostile come from accounts that fit this profile. By which I mean meeting all five points. This analysis meets the scientific criterion of being replicable. You can test those figures for yourselves by looking through twitter. That is plain evidence these unusual profiles are being deliberately deployed – and highly probably deliberately created – for hostile intent.

I had spotted the giveaway profile of those attacking me a year ago, and had been mulling over posting on it. What determined me to do so was clicking on the “Mark Field” twitter trend following his physical attack on the female climate change activist. I was astonished by the sheer volume of tweets defending Mark Field. Clicking on them, I started to realise that what I was seeing was a massive deployment of twitter troll accounts all precisely following the profile I have outlined. They were putting out a unified message that the lady may have been an armed terrorist and that Field should be praised for his resolute, even heroic, action.

So here is the fun bit, some examples you can look at. I don’t claim these are all trolls. Some of these may be real identities who just happen to match the twitter troll profile. They may follow many times more people than they have followers simply because they have deeply repulsive personalities or nothing interesting to say. But remember we are talking about trolls not bots, so there is a human multiple account operative to all of the actual security service troll accounts, whose job it is to respond and attempt to portray a real existence. Unlike bots, if challenged, troll accounts will answer.

Look out yourself for troll accounts with these characteristics on twitter in future. Exposure is the simple way to nullify the vast state propaganda programmes on social media. 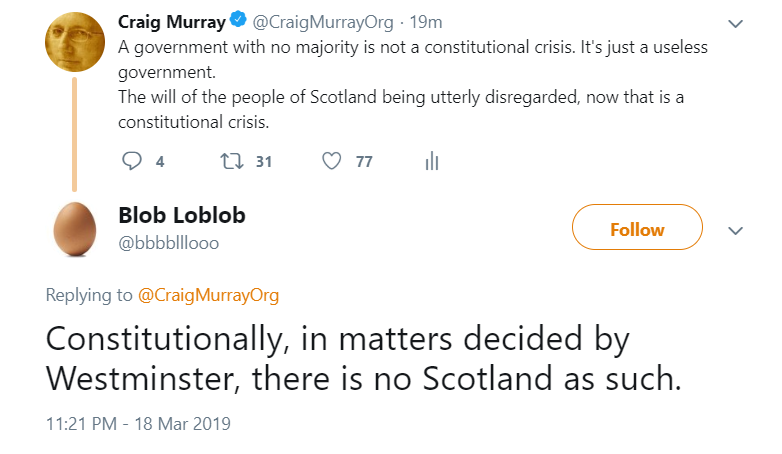 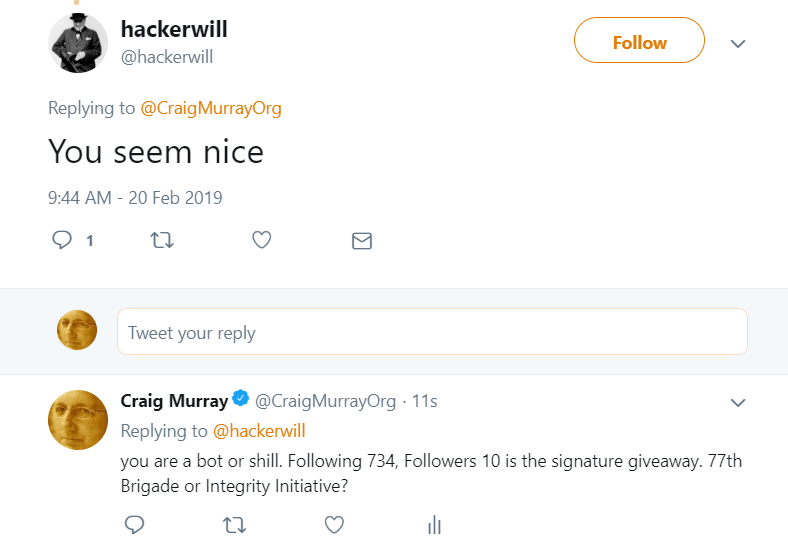