“Without a huge national effort to halt the growth of this virus, there will come a moment when no health service in the world could possibly cope; because there won’t be enough ventilators, enough intensive care beds, enough doctors and nurses,” Conservative Prime Minister Boris Johnson declared Monday.

A massive audience of 27 million watched his address to the nation live on TV. Factoring in internet viewing platforms, it will likely be the most-watched broadcast in British history. But for those millions seeking guidance from the government, the message was one of calculated contempt.

If “too many people become seriously unwell at one time, the NHS [National Health Service] will be unable to handle it—meaning more people are likely to die, not just from Coronavirus but from other illnesses as well,” Johnson said. Therefore, to slow the disease he offered the “British people a very simple instruction—you must stay at home.”

A lockdown was now in place, to be enforced by the police. Aside from this repressive measure, nothing else was on offer. 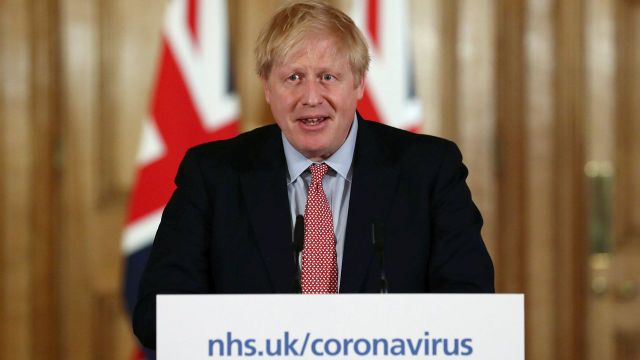 And when the caveats were piled up on Johnson’s “simple instruction,” it became clear that millions of workers would have no possibility of staying at home.

At the end of a list of reasons to leave home, including shopping for necessities, limited exercise and providing care to a vulnerable person, came “travelling to and from work, but only where this is absolutely necessary and cannot be done from home.”

Yesterday’s newspapers and TV were dominated by pictures of platforms and tube trains in London full to overflowing, as millions of workers were forced to travel on a much-reduced service. They included nurses and other medical staff who risk infection, but also workers in construction, food production, retail, local and central government employees and delivery services. The list of exemptions for shop workers includes supermarkets, grocery shops, newsagents, pharmacies, petrol stations, garages, pet shops and banks.

Workers who refuse to work can be sacked. Others are self-employed and will get nothing if they do not work. This includes construction workers employed by major concerns, only some of which suspended operations after a public outcry yesterday.

Johnson’s measures are necessary, given that every person infected with COVID-19 likely infects 2.5 people—meaning that after a month 406 people have the virus. Cutting exposure by 50 percent, to 1.25 people, reduces this monthly total to 15 and by 75 percent to 2.5 people. But his claim that “the critical thing we must do is stop the disease spreading between households” is false, given that most infections occur within households.

The only way the spread of the disease can be properly combatted is if a rigorous programme of isolation is matched with a testing regime to establish who has the disease at the earliest opportunity—as is the case in China, South Korea and Singapore, where temperature tests are carried out everywhere at the beginning of a regime leading up to sputum swabs and lab analysis.

Johnson boasted that “Day by day we are strengthening our amazing NHS,” including “increasing our stocks of equipment” and “buying millions of testing kits that will enable us to turn the tide on this invisible killer.” But the reality behind such pledges to “ramp up” COVID-19 testing from 4,000 a day to 25,000 was laid bare by internal government documents leaked to Politico.

An email sent by a “senior Downing Street aide” Sunday afternoon to UK research institutes asked to borrow COVID-19 lab testing kits because “There is only a limited supply of these machines so the PM [prime minister] is making an urgent appeal for you to lend us your machine(s) for the duration of the crisis.” An attached letter from Johnson admits “there are no machines available to buy,” adding that “if you have any staff who are experienced in using the machines … that would also be very helpful.”

As of yesterday, just 90,436 people have been tested, with only 280 people involved in laboratory testing in the entire UK. Even now, not even medical staff are being tested, despite being most at risk themselves and most likely to spread the virus to others. The situation is made worse still by the absence of ventilators—talks only began last week with manufacturers on switching production—as well as proper full FFP3 respirator masks and other essential Personal Protective Equipment, including surgical gowns.

This underscores the statement by Hans Henri Kluge, director for the World Health Organization (WHO) in Europe, insisting that “The shortage of medical supplies can be never solved by market dynamics only…” But it also exposes the impact of decades of systematic underfunding and running down of Johnson’s “amazing NHS” by his and previous governments, Conservative and Labour, as they sought to gut social spending and encourage private medicine.

Writing in the Guardian, Devi Sridhar, chair of global health at the University of Edinburgh, provides a devastating condemnation of what Johnson’s government has done and not done, stating bluntly that this will “cost many thousands of lives.”

After detailing the unfolding of the coronavirus crisis since, Sridhar stressed: “In the UK we have had nine weeks to listen, learn and prepare. We have had nine weeks to run outbreak simulations, set up supply chains to ensure sufficient personal protective equipment (PPE) and ventilators, and bring about the availability of rapid, cheap tests. We have had nine weeks to establish algorithms to support contact tracing, and start mass awareness campaigns not only about hand-washing, but about the risks that the virus would pose to social and economic activity if not taken seriously by all.”

Instead, Johnson pursued a policy of allowing the spread of the disease as part of a declared strategy of developing “herd immunity.” Only when faced with a backlash at plans to allow hundreds of thousands to die did he carry out his limited U-turn, closing schools, pubs, cafés etc., and appealing for household self-isolation.

Sridhar’s critique, savage though it is, doesn’t go nearly far enough. Johnson wasn’t ignoring warnings from the past nine weeks, but the past nine years. In 2011, the Department of Health’s (DoH) UN Influenza Pandemic Preparedness Strategy set out a reasonable worst-case scenario of 50 percent of the population exhibiting symptoms “during one or more waves lasting 15 weeks” and mortality of between 210,000 and 315,000—mainly during peak weeks of the infection when demand for critical care services “outstrips supply, even at maximum expansion.”

Instead of expanding capacity to meet this challenge, the NHS and health services throughout the world were eviscerated to funnel money into the coffers of the super-rich. That policy continues.

Johnson’s measures to combat COVID-19 are always too little, too late. But the ruling elite is stressing that even these paltry measures must not set a dangerous precedent. Former Tory leader William Hague warned Monday in the Daily Telegraph, “For radical socialists, the proof that the state can take over paying wages, direct vital businesses and create money without restraint will be a justification for decades to come of ideas in which they have always believed.”

As soon as possible, the ruling class will move to reinforce the dictatorship of the market at the expense of the working class. For now, the coronavirus crisis is being utilised to make available at least £350 billion to the banks and major corporations in an ongoing transfer of social wealth that dwarfs even the bailout following the 2008 crash.

But once the anticipated “surge” in cases has passed, the government will employ its new powers of state repression directly against an increasingly restive and desperate working class. The police now imposing a lockdown, and the army, having been brought onto the streets, will inevitably be used to suppress rising social discontent among the millions made unemployed. They will force other workers back to work for a pittance, at a time of continued “national emergency.”

2 thoughts on “Boris Johnson’s coronavirus measures: Political criminality that will cost tens of thousands of lives”