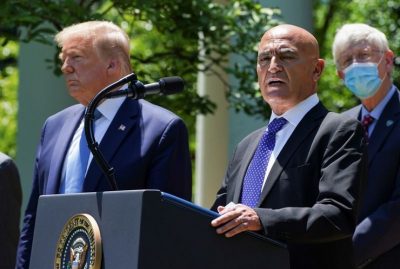 The US White House has appointed a coronavirus “Vaccine Czar” from Big Pharma to oversee something dubbed Operation Warp Speed. The goal is to create and produce 300 million doses of a new vaccine to supposedly immunize the entire US population by year-end against COVID-19. To be sure that Big Pharma companies give their all to the medical Manhattan Project, they have been fully indemnified by the US government against liabilities should vaccine recipients die or develop serious disease as a result of the rushed vaccine. The FDA and NIH have waived standard pre-testing on animals in the situation. The US military, according to recent remarks by the US President, is being trained to administer the yet-to-be unveiled vaccine in record time. Surely nothing could go wrong here?

Warp speed is a term out of the sci-fi Star Trek media, defined as a speed faster than the speed of light. In recent weeks billions of dollars have been pledged from governments, from the Bill and Melinda Gates Foundation and others to fast-track a vaccine as well as test medical treatments to combat the VODIV19 illness said to originate from a novel coronavirus first discovered late 2019 in Wuhan China. This rush to create a “miracle” vaccine is ominous and suggests some hidden agenda.

Washington’s Operation Warp Speed is reportedly the brainchild of Presidential Adviser and son-in-law Jared Kushner. It is being formally run by the Health and Human Services Secretary Alex Azar and Defense Secretary Mark Esper who will work with a new Vaccine Czar. The Vaccine Czar selected for Kushner’s Operation Warp Speed is former GlaxoSmithKline Chairman of its Vaccines Division, Morrocan-born US citizen, Dr. Moncef Slaoui. From 2006 through 2017 Slaoui was Chairman of Global R&D and Vaccines at GlaxoSmithKline and sat on the company’s Executive team and Board of Directors.

While at GSK Slaoui headed the development of Cervarix. Its Cervarix HPV cervical cancer vaccine was reported tied to multiple deaths or severe crippling effects in many recipients. A 2017 WHO monitoring report revealed that serious adverse effects from Moncef Slaoui’s HPV vaccine included complex regional pain syndrome (CRPS), postural orthostatic tachycardia syndrome (POTS) and chronic fatigue syndrome (CFS) that “exceeds any other vaccine.” That is not reassuring in terms of the new Czar of a rushed coronavirus vaccine.

In 2015 the Indian Supreme Court investigated charges that young Indian village girls died after being given Cervarix from Slaoui’s GSK. It was done in illegal vaccine “human guinea pig” tests of the HPV vaccine where neither the girls nor their parents were told what it was. The study was reportedly funded by the Bill and Melinda Gates Foundation.

In 2012 while Slaoui headed GSK global R&D and vaccine development, and sat on the GSK board, the company was fined $3 billion by the US Department of Justice, the largest ever fine against a pharmaceutical company. Among the charges was that GlaxoSmithKline deliberately withheld alarming safety data for its major-selling diabetes drug, Advandia, from the US FDA. After Advandia quietly vanished from the product list of GSK.

Slaoui also has ties to the projects of the Bill & Melinda Gates Foundation. He sat on the board of the Gates-funded International AIDS Vaccine Initiative. The IAVI was initiated in 1994 at a Rockefeller Foundation conference and is backed among others by the Gates Foundation, by the US Department of Defense and by Tony Fauci’s National Institute of Allergy and Infectious Diseases.

At a May 15 White House press conference where the President introduced Slaoui as the head of the crash vaccine project, Slaoui stated,

“Mr. President, I have very recently seen early data from a clinical trial with a coronavirus vaccine. These data make me feel even more confident that we will be able to deliver a few hundred million doses of vaccine by the end of 2020.”

Though he did not say, he was clearly referring to Moderna and its mRNA gene-edited vaccine, the first US vaccine authorized to enter Phase I human trials after the US government gave the company a staggering $483 million of funding to fast-track the COVID-19 vaccine.

Vaccine Czar Slaoui is well-placed with regard to Moderna. After leaving GSK from 2017 until he joined the Trump Operation Warp Speed, Slaoui was on the Moderna Board of Directors. He also still holds $10 million worth of Moderna stock options, options likely to soar in value as the Warp Speed zooms forward. This would suggest a glaring conflict of interest with Czar Slaoui, but that’s only the start of this saga, where millions of lives are potentially at threat from a novel inadequately-tested or proven genetically edited vaccine.

At this point the leading US Government candidate for winning the “warp speed” race to roll out a COVID-19 vaccine is Slaoui’s Moderna Inc. in Cambridge, Massachusetts. That’s surely a coincidence?

Moderna claims that between January 11, when they got the DNA sequence of the virus from China, and January 13–in just two days–working together with Anthony Fauci’s National Institute of Allergies and Infectious Diseases (NIAID) of NIH, they managed to finalize the sequence for mRNA1273 vaccine against the novel coronavirus. At that point Fauci announced unprecedented plans to run human Phase I trials of the vaccine without prior animal studies. The FDA waived animal pretest requirements. The Moderna mRNA1273 tests were funded by the Gates Foundation-funded Coalition for Epidemic Preparedness Innovations (CEPI).

The focus by Fauci on Moderna’s mRNA experimental COVID-19 vaccine while Slaoui was heading its development at Moderna is impressive to say the least. The company states that on April 16, Moderna got an award from US government agency BARDA for $483 million to accelerate development of mRNA-1273. This award will fund the development of mRNA-1273 to FDA licensure and manufacturing process scale-up to enable large-scale production in 2020 for pandemic response. At that point the stock value of Slaoui’s Moderna stock options jumped 184%. Then, on May 1, Moderna and Lonza Group announced a worldwide strategic collaboration to manufacture mRNA-1273 at a planned 1 billion doses per year. This is no small deal.

On May 6, Moderna filed a Current Report on Form 8-K with the SEC, which included an interview published by National Geographic with Anthony S. Fauci, Director of NIAID, which described his assessment of the results of testing related to the ongoing Phase 1 clinical study of mRNA-1273. It was quite positive.

So, between January 13 and March 25, Slaoui and his team at Moderna were able to design the vaccine, and to produce it in such a way that it can be injected in humans, Slaoui told a Moroccan magazine, L’Economiste. While with Moderna, Slaoui was fully involved in the development of the mRNA COVID-19 vaccine.

On May 7 just days before Slaoui became the Trump Vaccine Czar, the US Food and Drug Administration (FDA) approved the gene-edited messenger RNA (mRNA) vaccine, mRNA1273, to go into a Phase II human trial in the summer. On May 12, the FDA gave Fast Track Designation for Moderna’s mRNA Vaccine. Warp Speed, you know.

The FDA with the backing of Tony Fauci’s NIAID in the NIH, granted unprecedented Phase I human trials of the never-before approved mRNA vaccine on April 27. They skipped normal animal, usually rat, testing, to go directly to human guinea pig tests. Moderna says Phase II trial will assess the safety, reactogenicity, and immunogenicity of two vaccinations of mRNA-1273 given 28 days apart. They will enroll 600 healthy adults for the experiment and supposedly follow their health for 12 months after the second vaccination. The plan is to begin human vaccinations by year end.

All this, despite the evidence of extreme conflicts of interest between NIAID and other agencies of the US Government with Moderna and now-Vaccine Czar and former Moderna director Slaoui, might be treated more lightly, were it not for the fact that Moderna’s mRNA gene-edited vaccine technology is entirely experimental and never before approved for use as a vaccine. The company itself admits as much. It says, “mRNA is an emerging platform… we are still early in the story. Our most advanced vaccine program (CMV) is in Phase 2 clinical testing and we have no approved drugs to date.”

Moderna and others working with the experimental gene-edited mRNA vaccines claim they are safer than the admittedly unpredictable gene-edited DNA vaccines. DNA vaccine research is thirty years old but to date, has failed to produce a single licensed DNA vaccine. Moderna is only 11 years old and the CRISPR gene-editing technology it uses is barely 5 years old. We are told mRNA is completely different and safe.

However, numerous scientists warn that once inside the cell nucleus, mRNA vaccines have a risk of permanently changing a person’s DNA in unpredictable ways. Tony Faudi’s own NIH published a scientific paper regarding the new mRNA vaccine prospects. It read in part, “innate immune sensing of mRNA has also been associated with the inhibition of antigen expression and may negatively affect the immune response. Although the paradoxical effects of innate immune sensing on different formats of mRNA vaccines are incompletely understood, some progress has been made in recent years in elucidating these phenomena.” This is highly experimental science.

Another scientific paper funded by several Chinese universities and republished by the NIH in 2019, reviewing the development of the new messenger RNA technique for vaccines sounded some sober warnings. It noted that there were “Concerns with instability and low immunogenicity.” Further that, “mRNA vaccines are efficient at antigen expression, but sequence and secondary structures formed by mRNAs are recognized by a number of innate immune receptors, and this recognition can inhibit protein translation.” Not only that, but “…several of these delivery vehicles demonstrated toxicity in vivo, which may limit their use in humans.”(emphasis added). The authors concluded that “The immune response mechanism instigated by mRNA remains to be elucidated. The process of mRNA vaccine recognition by cellular sensors and the mechanism of sensor activation are still not clear.”

The US government, in a tight-knit circle all tied to Tony Fauci’s NIAID, the Gates Foundation, WHO are moving with not warp, but rather warped human priorities to deliver us a vaccine that no one can assure is in any way safe. Were Moderna so certain it is safe, they should offer to be legally liable for any mRNA damage. They don’t, nor do any vaccine companies. We need to decide if the scale of the worldwide deaths, inflated or not, alleged to be of COVID-19, warrant such a human experiment that could alter our genetics in unpredictable and possibly toxic ways.

F. William Engdahl is strategic risk consultant and lecturer, he holds a degree in politics from Princeton University and is a best-selling author on oil and geopolitics, exclusively for the online magazine “New Eastern Outlook” where this article was originally published. He is a Research Associate of the Centre for Research on Globalization.