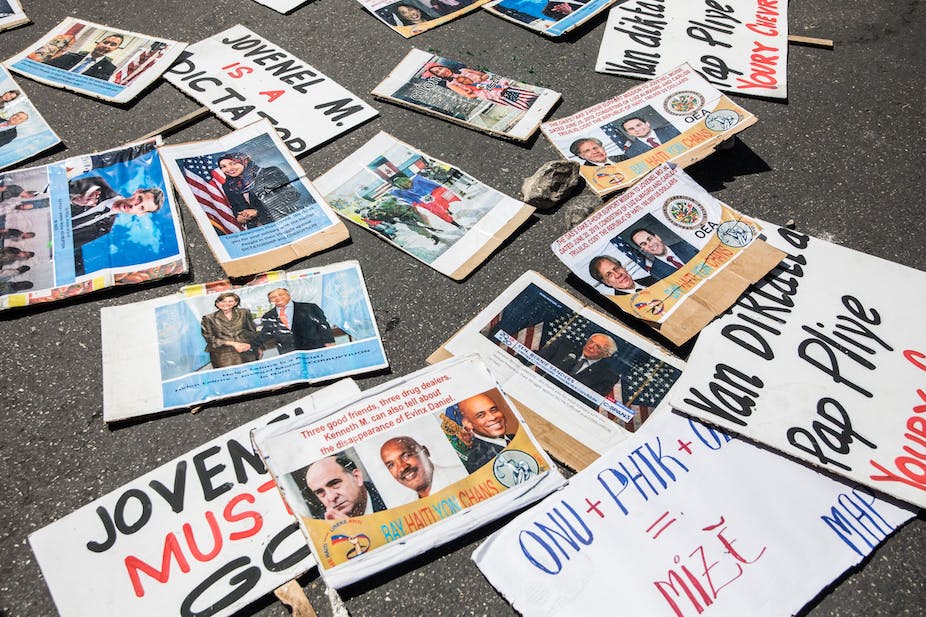 Protest signs on the ground before a march on March 28, 2021, in Port-au-Prince, Haiti, to denounce President Jovenel Moïse’s efforts to stay in office past his term. Valerie Baeriswyl/AFP via Getty Images

Haitian protesters on the nation’s streets have a laundry list of reasons they believe President Jovenel Moïse should resign.

They blame Moïse for overstaying his term, which should have ended on Feb. 7, for fiscal austerity that has caused rapid inflation and deteriorating living conditions and for sponsoring gang attacks that have killed at least 240 people since 2018, according to human rights groups.

And though very few people in Haiti speak English, Haitian protesters are using English to make their demands known, with viral Twitter protest hashtags like #FreeHaiti and protest signs reading “Jovenel is a dictator.”

My research on imperialism and Caribbean politics suggests Haitians are using English not only to draw Western attention to the crisis there, but also to indict the U.S. for its role in creating that crisis.

Sustained protests have been a hallmark of Moïse’s tenure since he was elected in November 2016 in an election that fewer than 12% of Haitians voted in. 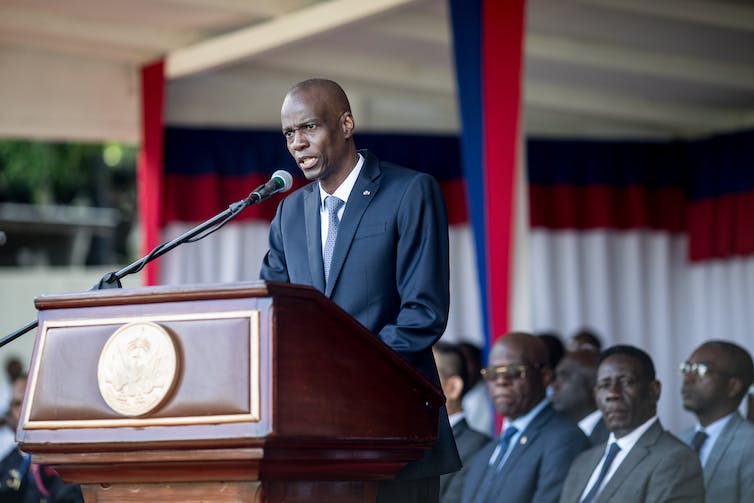 Haitian President Jovenel Moïse speaks on Nov. 18, 2019. Jovenel at a podium with men sitting behind him

Moïse was the handpicked successor of Haiti’s unpopular last president, Michel Martelly. His meager 2016 electoral success came after two years of delayed votes and confirmed electoral fraud by Martelly’s government. In 2017, his first year in office, the Haitian Senate issued a report accusing Moïse of embezzling at least US$700,000 of public money from an infrastructure development fund called PetroCaribe to his personal banana business.

Protesters flooded into the streets crying “Kot Kòb Petwo Karibe a?” – “where is the PetroCaribe money?”

Lacking the trust of the Haitian people, Moïse has relied on hard power to remain in office.

He created a kind of police state in Haiti, reviving the national army two decades after it was disbanded and creating a domestic intelligence agency with surveillance powers. Since early last year, Moïse has also been ruling by decree. He effectively shuttered the Haitian legislature by refusing to hold parliamentary elections scheduled for January 2020 and summarily dismissed all of the country’s elected mayors in July 2020 when their terms expired.

Existing street protests exploded early this year after Moïse refused to hold a presidential election and step down when his term ended in Feburary 2021. Instead, he claims his term ends in February 2022, because Haiti’s 2016 election was postponed.

In the coming months, Moïse says, he intends to change the Haitian Constitution to strengthen the powers of the presidency and prolong his administration.

Memories of a dictatorship 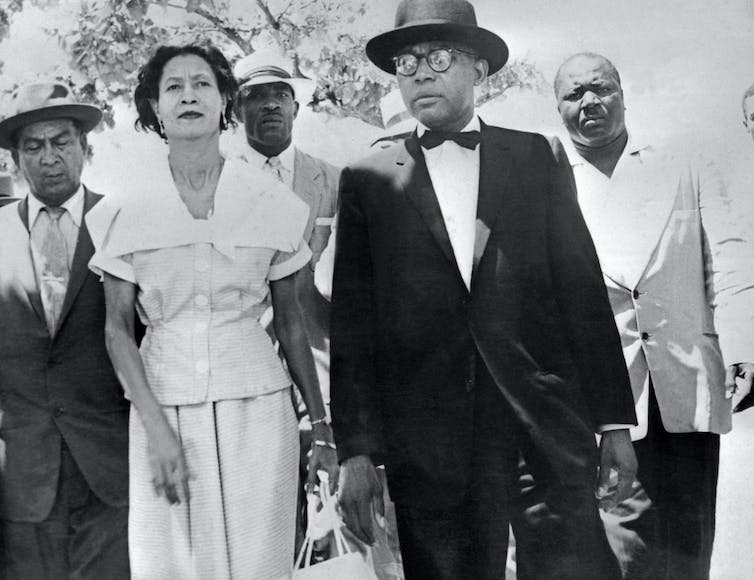 François Duvalier with bodyguards and his wife, Simone, after they voted in Haiti’s 1957 presidential election, in which Duvalier was a leading candidate. AFP via Getty Images

Both Papa Doc and Baby Doc relied on murdering and brutalizing Haitians to remain in power, in close collaboration with Western corporate and political interests in Haiti. The Duvaliers enriched themselves – along with Haiti’s American financial investors and U.S. manufacturers based there – while leaving the country in massive debt.

When mounting Haitian protests ended the regime in 1986, Baby Doc fled the country. Haiti was in economic collapse and social ruin.

The 1987 Haitian Constitution that Moïse now seeks to change was written soon after to ensure that Haiti would never slide back into dictatorship.

Beyond Moïse’s use of state violence to suppress opposition, Haitian protesters today see another similarity with the Duvalier era: the United States’ support.

In March, the U.S. State Department announced that it supports Moïse’s decision to remain in office until 2022, to give the crisis-stricken country time to “elect their leaders and restore Haiti’s democratic institutions.”

That stance – which echoes that of Western-dominated international organizations that hold substantial sway in Haiti, such as the Organization of American States – sustains what is left of Moïse’s legitimacy to remain president.

Haitians unhappy with continued American support for their embattled president have held numerous demonstrations outside the U.S. embassy in the Haitian capital of Port-au-Prince, while Haitian Americans in the U.S. have protested outside the Haitian embassy in Washington, D.C.

Some Haitian demonstrators have also burned the American flag at several protests in Port-au-Prince. The flag-burning, like the English-language protest slogans, aims to highlight the history of Western foreign intervention that created the disaster situation in Haiti.

From its invasion and military occupation of Haiti from 1915 to 1934 to its support of the Duvalier regime, the U.S. has played a major role in destabilizing Haiti. Ever since the devastating Haitian earthquake of 2010, international organizations like the United Nations and nonprofits like the American Red Cross have also had an outsize presence in the country.

Last year, protesters staged demonstrations outside the United Nations headquarters in Haiti as the U.N. Security Council met to discuss Moïse’s future and the country’s political crisis. Their message, according to the publication Haïti Liberté, “No more foreign meddling.” 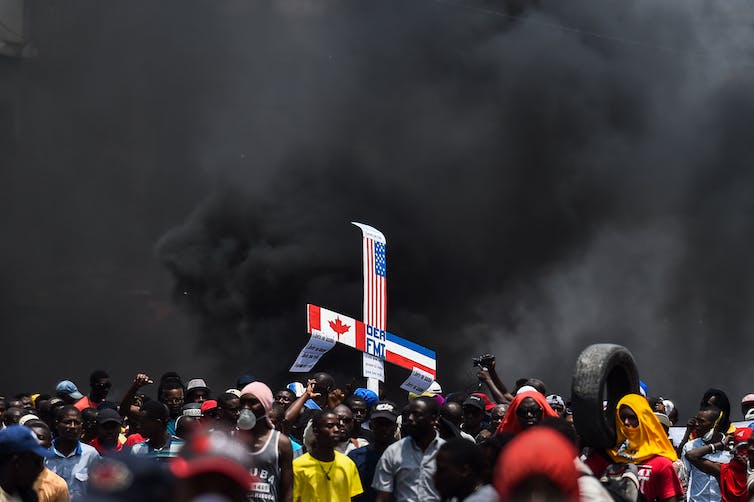 Protesters in Port-au-Prince in 2019 highlight the role of foreign governments in supporting President Jovenel Moïse, who was accused of corruption. CHANDAN KHANNA/AFP via Getty Images

Haitian protesters aren’t the only non-English-speaking protesters to use English to air their grievances. In Myanmar, where a Feb. 1 coup overthrew the country’s democratically elected government, English-language protest signs, videos and hashtags abound.

According to linguist Mary Lynne Gasaway Hill’s 2018 book, “The Language of Protest,” using a widely spoken, politically dominant language like English helps to get traditional news outlets to cover uprisings occurring abroad. And if the state cracks down on dissent, that means international audiences will see the violence, too – potentially protecting protesters and hurting the government’s credibility.

English is a more likely protest tool, then, in a country where local people feel – or in fact are – powerless to effect change without outside alliances. Coupled with “social media and the rapidity of globalized communication,” Hill writes, English protest messages can raise some critical international solidarity.

I see another reason, too, for Haitian protesters’ recent adoption of English: It is the language of the United States, the world’s most powerful country and Moïse’s most influential international backer.

Haitians’ cries to “Free Haiti” ask Americans not only to pay attention to their struggle – but also to consider their country’s responsibility for it.

Tamanisha John does not work for, consult, own shares in or receive funding from any company or organisation that would benefit from this article, and has disclosed no relevant affiliations beyond their academic appointment.