This is verbatim from the official report of the UN General Assembly plenary of 16 December 2021:

The Assembly next took up the report on “Elimination of racism, racial discrimination, xenophobia and related intolerance”, containing two draft resolutions.

By a recorded vote of 130 in favour to 2 against (Ukraine, United States), with 49 abstentions, the Assembly then adopted draft resolution I, “Combating glorification of Nazism, neo‑Nazism and other practices that contribute to fuelling contemporary forms of racism, racial discrimination, xenophobia and related intolerance”.

By its terms, the Assembly expressed deep concern about the glorification of the Nazi movement, neo‑Nazism and former members of the Waffen SS organization, including by erecting monuments and memorials, holding public demonstrations in the name of the glorification of the Nazi past, the Nazi movement and neo‑Nazism, and declaring or attempting to declare such members and those who fought against the anti‑Hitler coalition, collaborated with the Nazi movement and committed war crimes and crimes against humanity “participants in national liberation movements”.

Further, the Assembly urged States to eliminate all forms of racial discrimination by all appropriate means, including through legislation, urging them to address new and emerging threats posed by the rise in terrorist attacks incited by racism, xenophobia and other forms of intolerance, or in the name of religion or belief. It would call on States to ensure that education systems develop the necessary content to provide accurate accounts of history, as well as promote tolerance and other international human rights principles. It likewise would condemn without reservation any denial of or attempt to deny the Holocaust, as well as any manifestation of religious intolerance, incitement, harassment or violence against persons or communities on the basis of ethnic origin or religious belief.

In Ukraine, support for the Ukrainian nationalist divisions who fought alongside the Nazis has become, over the last eight years, the founding ideology of the modern post 2013 Ukrainian state (which is very different from the diverse Ukrainian state which briefly existed 1991-2013). The full resolution on nazism and racism passed by the General Assembly is lengthy, unnzaires but these provisions in particular were voted against by the United States and by the Ukraine:

6. Emphasizes the recommendation of the Special Rapporteur that “any commemorative celebration of the Nazi regime, its allies and related organizations, whether official or unofficial, should be prohibited by States”, also emphasizes that such manifestations do injustice to the memory of the countless victims of the Second World War and negatively influence children and young people, and stresses in this regard that it is important that States take measures, in accordance with international human rights law, to counteract any celebration of the Nazi SS organization and all its integral parts, including the Waffen SS;

7. Expresses concern about recurring attempts to desecrate or demolish monuments erected in remembrance of those who fought against Nazism during the Second World War, as well as to unlawfully exhume or remove the remains of such persons, and in this regard urges States to fully comply with their relevant obligations, inter alia, under article 34 of Additional Protocol I to the Geneva Conventions of 1949;

10. Condemns without reservation any denial or attempt to deny the Holocaust;

11. Welcomes the call of the Special Rapporteur for the active preservation of those Holocaust sites that served as Nazi death camps, concentration and forced labour camps and prisons, as well as his encouragement of States to take measures, including legislative, law enforcement and educational measures, to put an end to all forms of Holocaust denial

As reported in the Times of Israel, hundreds took part in a demonstration in Kiev in May 2021, and others throughout Ukraine, in honour of a specific division of the SS. That is but one march and one division – glorification of its Nazi past is a mainstream part of Ukrainian political culture.

There are no two ways about it. The Ukrainian vote against the UN resolution against Nazism was motivated by sympathy for the ideology of historic, genocide active Nazis. It is as simple as that.

The United States claims that its vote against was motivated by concern for freedom of speech. We have the Explanation of Vote that the United States gave at the committee stage:

The United States Supreme Court has consistently affirmed the constitutional right to freedom of speech and the rights of peaceful assembly and association, including by avowed Nazis

Why was the United States government targeting journalists in the invasion of Iraq? The United States believes in freedom of speech when it serves its imperial interests. It does not do so otherwise. This is the very worst kind of high sounding hypocrisy, in aid of defending the Nazis in Ukraine.

The second reason the United States gives is that Russia is making the whole thing up:

a document most notable for its thinly veiled attempts to legitimize Russian disinformation campaigns denigrating neighboring nations and promoting the distorted Soviet narrative of much of contemporary European history, using the cynical guise of halting Nazi glorification

The problem here is that it is very difficult to portray the Times of Israel or 50 bipartisan US congressmen as a Russian disinformation campaign. There is no historical doubt whatsoever of Ukrainian nationalist forces active support of Nazism and participation in genocide, not just of Jews and Roma but of Poles and religious minorities. There is no doubt whatsoever of the modern glorification in Ukraine of these evil people.

It is of course not just Ukraine. In Estonia, Latvia and Lithuania the record of collaboration with Nazis, of active participation in fighting for Nazis, and in active participation in genocide is extremely shaming. Throughout Eastern Europe there is a failure in these “victim nations” to look history squarely in the eye and to admit what happened – a failure the United States in actually promoting as “a campaign against Russian disinformation”.

I recommend to you the website www.defendinghistory.com, run by the admirable David Katz, which is a large and valuable resource on this website from a Lithuanian Jewish perspective that cannot remotely be dismissed as Russian or left wing propaganda. The front page currently features the December 2021 naming of a square in the capital after Lithuanian “freedom fighter” Juokas Luksa “Daumantas”, a man who commenced the massacre of Jews in Vilnius ahead of the arrival of German forces. 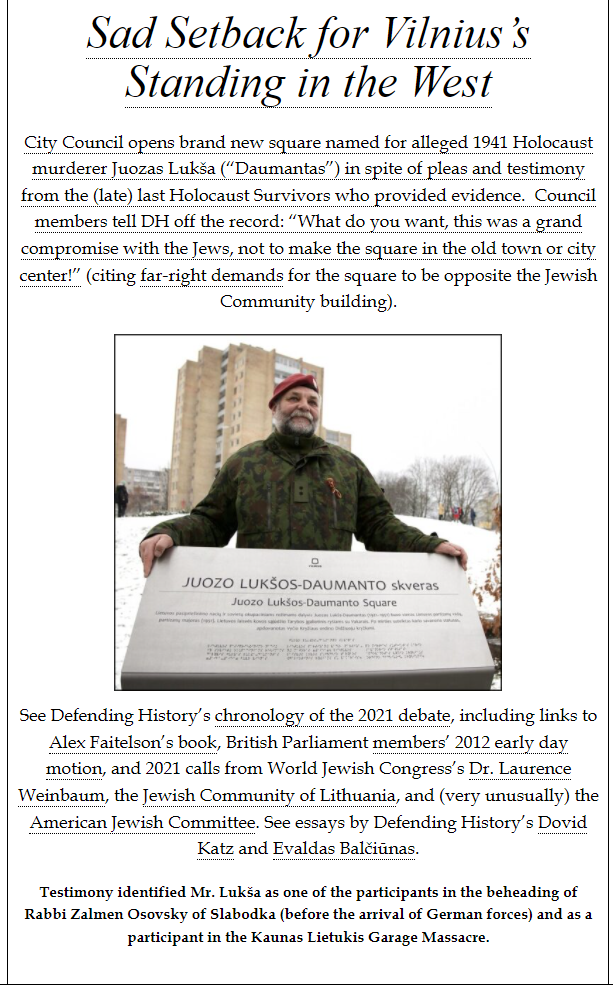 These are precisely the kind of commemorations the resolution is against. There has been a rash of destruction of Soviet war memorials and even war graves, and erection of commemorations, in various form, of Nazis throughout the Baltic states. That is what paras 6 and 7 of the resolution refer to, and there is no doubt whatsoever of the truth of these events. It is not “Russian disinformation”.

However the European Union, in support of its Baltic states members and their desire to forget or deny historical truth and to build a new national myth expunging their active role in the genocide of their Jewish and Roma populations, would not support the UN Resolution on Nazism. The EU countries abstained, as did the UK. The truth of course is that NATO intends to use the descendants of Eastern European racists against Russia much as Hitler did, at least in a cold war context.

You won’t find that in the Explanation of Vote.