The following briefing note is developed by academics researching the use of chemical and biological weapons during the 2011-present war in Syria. The note reflects work in progress. However, the substantive questions raised need answering, especially given the seriousness of the political situation in the Middle East and UK-Russian relations. The authors welcome comments and corrections.

What was the agent used?

An early report that the hospital was dealing with poisoning caused by an opiate such as fentanyl was most likely based on the initial working diagnosis. Signs of organophosphate poisoning – constricted pupils, vomiting, reduced consciousness and reduced breathing – could easily be mistaken for opiate overdose, usually a more likely diagnosis.   OPCW has stated that the BZ detected by the Swiss Federal Institute for Nuclear, Biological and Chemical Protection in one of the samples sent by OPCW was not from Salisbury but was in a control sample.

The Russian ambassador reported that on 12 March the Foreign Secretary had told him that the nerve agent used against Mr and Ms Skripal had been identified as A-234.   The OPCW report issued on 12 April did not identify the agent but stated that they had confirmed the identification made by the UK and that this identification had been included in the confidential report provided to “States parties”. On 14 April the Russian Foreign Minister stated that A-234 had been reported by the Swiss Federal Institute for Nuclear, Biological and Chemical Protection that was one of the four accredited labs used by OPCW to analyse the Salisbury samples.

Based on public reports, a ChemSpider record for A-234 has been created which assigns it the IUPAC name ethyl [(1E)-1-(diethylamino)ethylidene] phosphoramidofluoridate. Its predicted vapour pressure is very low indicating that it is predicted to be non-volatile. No information on its stability is available.   The OPCW director Uzumcu stated in a newspaper interview that the agent “seems to be very persistent,” and “not affected by weather conditions”. This was confirmed the next day by an OPCW press statement that: “the chemical substance found was of high purity, persistent and resistant to weather conditions”. Ian Boyd, the chief scientific adviser at the Department for Environment, Food and Rural Affairs, was reported to have stated:

“The chemical does not degrade quickly. You can assume it is not much different now from the day it was distributed”.

No experimental studies of the stability of A-234 have been reported.

Who could have produced A-234 in bench-scale quantities?

It is no longer seriously disputed that, as noted in our earlier briefing, any well equipped university lab can synthesize and purify such chemicals at bench scale. OPCW reported that the agent (presumably A-234) was of high purity with “almost complete absence of impurities”.   This suggests that it was from a batch that had been synthesized for research, rather than for assassination purposes where it would be unnecessary to purify the agent.

Uzumcu stated in an interview with the New York Times that he had been told by UK officials that 50-100 grams of the agent was used.

OPCW quickly contradicted this in a statement that

“OPCW would not be able to estimate or determine the amount of the nerve agent that was used in Salisbury on 4 March 2018. The quantity should probably be characterized in milligrams”.

Who has studied A-234 or similar compounds?

Bench-scale research on the toxicity of agents that might be used in chemical warfare is entirely legitimate under the Chemical Weapons Convention, and does not have to be declared to OPCW.

Since our last briefing note, more material from the investigation of the Kivelidi poisoning has been published by Novaya Gazeta, updating the earlier article published on 22 March. The second article includes an image of the mass spectrometry profile of the sample recovered from the telephone handset, which matches that submitted by Edgewood to the NIST98 mass spectrometry database. The Russian experts who commented on the original result appear not to have had access to the mass spectrometry profile of A-234, and to have incorrectly reconstructed the structure from a best guess, based on the mass-charge ratios of the fragments, as something like the GV agent (both agents have molecular mass 224 daltons, and a 58-dalton fragment).   This establishes that Russia had synthesized this compound at bench scale by the mid 1990s, but does not confirm that it was ever developed for military use as alleged by Mirzayanov.

A 1997 newspaper article refers to a secret US army intelligence report referring to Russian development of A-232 and its “ethyl analog” A-234, indicating that the designation of these compounds and their structures was known to the US by this time. As noted in our last briefing note, the Edgewood lab submitted a mass spectrometry profile for A-234 to the public database NIST98, which was current from 1998 to 2001.

A patent application submitted by a US government lab in 2008 mentions “Novichoks”, but examination shows that the structures given for these compounds were the dihaloformaldoxime structures previously published as supposed “Novichoks”, not the phosphoramidofluoridates published by Mirzayanov later in 2008.   This does not indicate that the applicants were studying these compounds – most likely they included them to make their patent as broad as possible.

A study from Iran published in 2016 reported synthesis for research purposes of a compound similar to A-234, differing from it only by the presence of methyl instead of ethyl groups. In an interview with Czech television, President Zeman stated that in November 2017 the related compound designated A-230 was studied at the Brno Military Research Institute.

The director of Porton Down has declined to comment on whether Porton Down has stocks of A-234 for research purposes. The OPCW labs that identified A-234 in the specimens from Salisbury were most likely matching it against a mass spectrometry profile in OPCW’s Central Analytical Database.

No data on the toxicity of A-234 are available in the public domain. The printout of the entry in the NIST 98 database appears to cross-reference an entry in the database RTECS (Registry of Toxic Effects of Chemical Substances) but no entry for this compound now exists in RTECS.

Why was the structure of A-234 revealed?

The structure of A-234 was revealed in a book by Vil S Mirzayanov in 2008, some 13 years after he had emigrated to the US with the story of a secret programme to develop chemical weapons of a class named “Novichoks”. During 2008-2009 the US government, with an active part for the Secretary of State Hillary Clinton, was encouraging the development of a separatist movement in Tatarstan. As part of this, Mirzayanov was declared head of a Tatar government-in-exile in December 2008.   The publication of his book may thus have been part of an effort to build up Mirzayanov’s status as a dissident. His role in this operation may explain why subsequent discussion of his book by OPCW delegates was closely monitored (and discouraged) by the US State Department. Mirzayanov’s involvement in this operation undermines his credibility as an independent whistleblower.

When and where were the Skripals exposed to A-234? 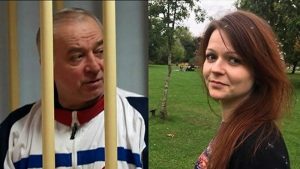 A summary of the different versions on which journalists were apparently briefed by security sources was given by the Russian embassy:

On 28 March the police announced that “at this point in our investigation, we believe the Skripals first came into contact with the nerve agent from their front door”.

Although it is possible that a nerve agent could be prepared in a formulation that would be absorbed only slowly through the skin, it is implausible that two individuals exposed through contact with the front door would have received doses that caused them to collapse suddenly and so nearly simultaneously that neither had time to call for help, at least three hours later.   It is more likely that they were attacked shortly before they were found collapsed on the park bench.

In the first few days after the poisoning there were media reports that Sergei Skripal had been in regular contact with his MI6 handler, whose Linked-In profile had stated that he was a consultant for Orbis Business Intelligence. On 7 March this profile was deleted and a Defence and Security Media Advisory Notice was issued to caution journalists against disclosing the identity of this consultant. However at Skripal’s trial in 2007 his MI6 handler had been identified as Pablo Miller, and the link between Skripal and Miller had been described in detail by Russian opposition media on 6 March.

This link between Skripal and Orbis may be relevant to the dossier compiled by Christopher Steele, the founder of Orbis, containing derogatory information on Donald Trump’s alleged ties to Russia. This dossier had been used by the FBI to apply for a Foreign Intelligence Surveillance Act court order authorizing surveillance of Trump’s campaign. By early 2018 the unravelling of this story was creating serious difficulties for Steele and for those he had worked with. These difficulties included a referral for criminal investigation by two US Senators, a libel case in the US against the publisher of the dossier which had led to a court ruling that Steele should be questioned in an English court, and a libel case in England against Orbis and Steele.   It is not difficult to postulate a situation in which the potential for damage to US-UK relations could have provided a motive for actors on both sides of the Atlantic to ensure that Sergei Skripal would not be available to give evidence.

This was summarized in a letter from the National Security Adviser, Sir Mark Sedwill to the NATO Secretary-General on 13 April 2018. Sedwill’s letter made several assertions that were substantiated only by “intelligence”:

Appearing before the House of Commons Defence Committee on 1 May, Sedwill (11:39) extolled the government’s reaction to the Salisbury incident as “an example of the Fusion Doctrine in practice”. The Fusion Doctrine brings other government departments under the National Security Council with “the introduction of senior officials as senior responsible owners to deliver each of the NSC’s priorities”.

Sedwill’s involvement in the preparation of the now widely discredited dossier ‘Iraq’s Weapons of Mass Destruction’, released in September 2002, calls into question his credibility in making these uncorroborated assertions.   The UK government’s case as set out by Sedwill is based on asserting that “only Russia has the technical means, operational experience and motive for the attack on the Skripals”. Each of these points is open to serious criticism:-

We thank Professor Rudy Richardson of the University of Michigan for advice on the toxicology of nerve agents.

Featured image is from TruePublica.